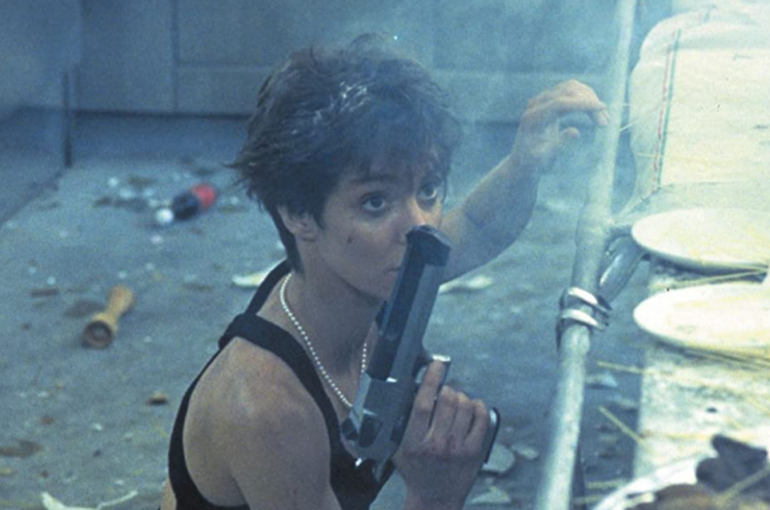 Plot: Convicted felon Nikita (Anne Parillaud), instead of going to jail, is given a new identity and trained to be a secret police assassin controlled by the government. Her lonely life is warmed when she falls in love with a man who knows nothing of her mysterious life.

Nikita AKA La Femme Nikita is an incredibly influential action thriller having given us several TV shows and an American remake. This original movie from 1990 was directed by Luc Besson and although it isn’t exactly packed to the brim with action it’s still a fun ride with some impressive set-pieces.

Anne Parillaud gives an exceptional performance as Nikita who is unstable, unpredictable and for the most part unsympathetic. She still manages to bring a vulnerability to Nikita but she never loses her wild side which is what makes her so mesmerising.

The opening scene is filled with intense gunplay as Nikita and her junkie friends try to rob a chemist but during the robbery, she murders a police officer. She is arrested and given an injection thinking she is about to die but she wakes up in a cell and is trained by the mysterious Bob (Tcheky Karyo) to become an assassin. Karyo would go on to be known for several villain roles in Bad Boys but this is one of my favourite characters of his as Bob may be ruthless, but he does genuinely have a soft spot for Nikita.

The two develop a slight bond but once her training is complete, she gets a new life and starts a relationship with Marco (Jean-Hugues Anglade) who has no clue about who she really is.

A lot of the movie focuses on Nikita and Marco’s relationship as she does various jobs for her employers while pretending to be a nurse. The pacing does drag in parts and I always found the ending a little anti-climactic, but it certainly has a sense of style and the action is well shot.

According to IMDb “Luc Besson had Anne Parillaud train extensively with guns so that she would be completely at ease with them. She took to practicing loading and unloading a fake gun in her car which led to her being pulled over by the police and having their guns drawn on her in traffic one day as they thought her weapon was real”.

Jean Reno shows up in the second half as the “Cleaner” Victor who feels like a precursor to Leon; it isn’t a huge role but the time he is on screen is one of the film’s highlights.

The music is perfect for the movie as it has a slinkiness to it but also a darkness which matches the film’s tone; it is a little dated sounding now but I still like it.

Overall, Nikita may drag a little at times but Ann Parillaud is the definitive version of the character and the action is slickly done; this is worth watching simply to see how influential it has been on the genre over the years.