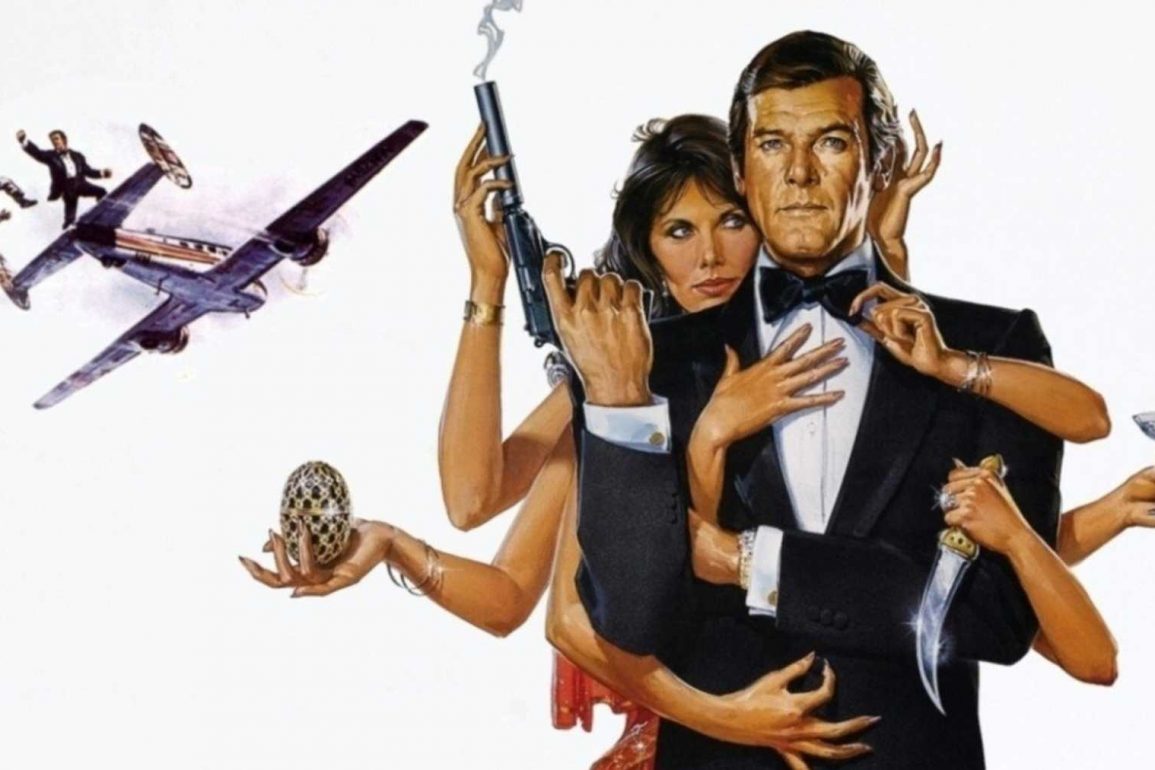 Plot: James Bond is assigned to solve the murder of agent 009, killed in East Germany clutching a fake Fabergé egg. The trail leads to India, where an enigmatic woman operates a smuggling ring under the cover of a travelling circus. However, her real motives prove to be far more sinister, and Bond uncovers a plot to blow up a US Air Force base in West Germany.

When I was younger I never really liked this movie and I considered it one of the weaker Bond films but as I’ve gotten older I’ve grown to enjoy it more. I watched it the other night with my brother and it’s arguably the funniest 007 feature to date with Roger Moore at his eyebrow raising best. It has so many one-liners like when he is in bed with a woman and she says “I need refilled” to which Moore responds the only way he can.

He is hilariously juvenile for example, the first thing he does with one of Q’s cameras is point it at a woman’s breasts; you certainly wouldn’t get away with this movie today but that’s why it’s such a riot.

Only in a Roger Moore Bond film would he show up for a final battle in a giant hot air balloon with the British flag on it. I’m sure Bond purists must hate it as it’s such a wacky film but personally the sillier Bond is the better. I love serious Bond movies as much as the next guy, but these Roger Moore films are just such fun that it’s hard not to be swept up in it.

This adventure takes Bond to India which apparently has the most dangerous jungles in the entire world as in one scene he is attacked by spiders, snakes, tigers and alligators within seconds.

There are several villains one of which Orlov is played by Steven Berkoff who is totally insane in this movie but he always makes for an intimidating villain; interestingly Rutger Hauer was also asked to play the character. Then we have Kamal Khan (Louis Jourdan) who is really the main antagonist but I particularly enjoyed his henchman Gobinda (Kabir Bedi) who just looked really mean.

As with any 007 movie there are of course some incredible stunts and I think the opening scene in the plane is one of the best as it was all done for real. Then we have that great chase scene through the streets of Delhi and the final fight on top of a plane is also spectacular.

A little bit of detail behind that opening place stunt from IMDB: The pre-title sequence has a scene where Bond flies a nimble homebuilt Bede BD-5J aircraft through an open hangar. Hollywood stunt pilot, and aerial coordinator, J.W. “Corkey” Fornof, who piloted the aircraft at more than one hundred fifty miles (two hundred forty-one kilometers) per hour, has said, “Today, few directors would consider such a stunt. They’d just whip it up in a computer lab.” Having collapsible wings, the plane was shown hidden in a horse trailer. However, a dummy was used for this shot. Filming inside the hangar was achieved by attaching the aircraft to an old Jaguar with a steel pole, driving with the roof removed. The second unit was able to add enough obstacles, including people and objects inside the hangar, to hide the car and the pole, and make it look as though Sir Roger Moore was flying inside the base. For the explosion after the mini jet escapes, however, a miniature of the hangar was constructed and filmed up close. The exploding pieces of the hangar were only four inches in length.

There are some great behind the scenes tales on IMDB so if you’re a big Bond fan like me then check it out but this one I found particularly entertaining – The character of Penelope Smallbone was named after one of the models who appeared in the opening credits to The Spy Who Loved Me (1977). At one point, Lois Maxwell flubbed a line and called her Penelope Smallbush, so that Sir Roger Moore replied “We know where your mind has been, Moneypenny!”

Maud Adams who plays Octopussy played another character in The Man with the Golden Gun just to thoroughly confuse you. We don’t see Octopussy’s face until well into the film but even when she does appear they really don’t do much with her as a character as she mostly watches while Khan and Orlov do their dastardly deeds. I do enjoy the finale however, when she and her circus friends fight back once again giving us some crazy stunts and set-pieces.

John Barry’s score is slinky and sexy much like the opening theme song; it all works perfectly for this tale as his music is what I will always associate with Bond.

I liked how they mention Property of a Lady early on which is the title of one of the 007 stories so it was a nice reference for the fans.

Overall, Octopussy is one of the silliest Bond movies and if you told me you hated it I would understand but I have a soft spot for it as there are some fantastic stunts and so many outrageous moments with Roger Moore on hilarious form to make it a thoroughly enjoyable movie.