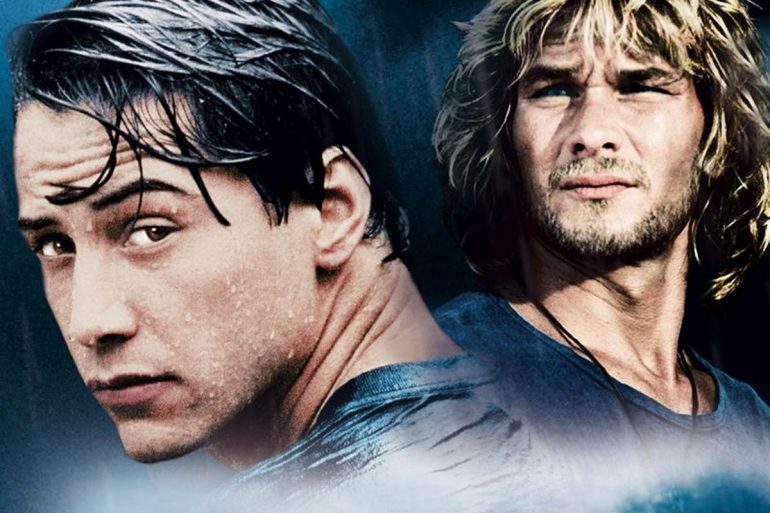 Plot: An FBI agent goes undercover to catch a gang of bank robbers who may be surfers.

Although slightly tarnished by Hot Fuzz lovingly mocking it, Point Break still remains one of the best action movies of the 90’s. It’s maybe my favourite Patrick Swayze (R.I.P.) movie and upon watching my Blu-ray of it, I’m reminded of how much I miss his presence in movies. He was always so likable on screen and the character of Bodhi is one of his most charismatic, despite being the bad guy.

Keanu Reeves is on great form as the hilariously named Johnny Utah, who goes undercover to infiltrate a gang of bank robbers named the Ex-Presidents.  Actually, if you’ve watched The Fast and the Furious then you already know the plot as it’s exactly the same (this came first).

Point Break also has Gary Busey playing a good guy for once; he isn’t even particularly insane in it and has some great lines as always.

Kathryn Bigelow did a fabulous job directing and rather than constant explosions, we get a build up of tension and characters you can relate to. But fear not, there’s still plenty of action; we get fist fights, shoot-outs, lawnmowers (?) and some of the best ariel photography you’ll ever see on film.

The sky-diving scenes really are breathtaking and there’s no blue screen or CGI here; all real stunts. The surfing scenes are beautifully shot and it’s not difficult to see why Utah would fall in love with the lifestyle.

Interesting sidenote: Swayze was himself an avid skydiver and took part in the skydiving climax. The producers apparently ended up serving him with a cease and desist letter after he jumped out of a plane over 30 times during filming. If that’s not dedication to a role then I don’t know what is.

Mark Isham’s score really captures the atmosphere of the film nicely and is arguably one of my favourite scores of his.

Although the story has been done over several times since then Point Break still remains a great action movie and looks fantastic on Blu-ray. The picture and audio are nicely remastered which makes it a must own.

Overall, Point Break remains a classic of the genre with iconic characters, breathtaking stunts and memorable set-pieces. A must-see!