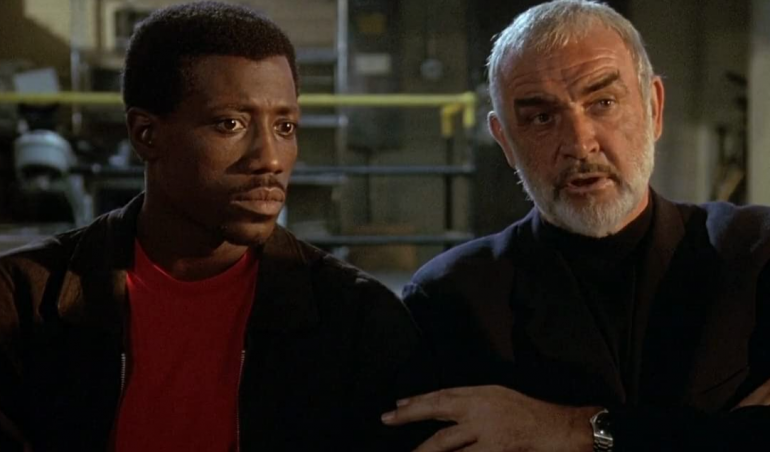 Plot: When a woman is found dead in a Los Angeles skyscraper occupied by a large Japanese corporation, detectives John Connor (Sean Connery) and Web Smith (Wesley Snipes) are called in to investigate. Although Connor has previous experience working in Japan, cultural differences make their progress difficult until a security disc showing the murder turns up. Close scrutiny proves the disc has been doctored, and the detectives realize they’re dealing with a cover-up as well.

The latest Sir Sean Connery film we’re covering is Rising Sun which is based on the Michael Crichton novel of the same name. When I was younger, I always found this movie rather slow and a bit dull but watching it now as an adult I’ve grown to appreciate it a lot more.

Although it’s described as an action crime drama on IMDB there isn’t much in the way of action aside from a couple of car chases and a fight at the end with Sean Connery and Wesley Snipes throwing down against some nameless henchmen; the mystery of the story is what keeps me watching as well as the sheer magnetism of Sean Connery and Wesley Snipes together on screen.

Rising Sun is a complicated tale and there’s a lot going on it with police corruption, racism and culture clashes all prominent. Although it’s primarily about the murder of a girl in a Japanese office building it’s also an interesting study of Japanese and American cultures that benefits from several viewings. Harvey Keitel’s racist cop sees American culture being overtaken by the Japanese and feels threatened by them, so he is barely civil to them despite the fact he is already corrupted.

I can see why Connery would have found the role of Captain John Connor (hey that name’s familiar) appealing as he is not only the wise old mentor but he is a keen golfer like Sean was in real life. Connor is interesting because we aren’t entirely sure he can be trusted or what his motives are and even by the end even though we know he is a good guy he is still a man of mystery. He has some great Connery-esque lines like “Don’t you fuck with me!” and “but of course you are, dear!” which still make me smile with every viewing.

We’ve got a rather incredible supporting cast including Cary Hiroyuki-Tagawa who for once isn’t playing a villain and Eddie has become one of my favourite characters of his. Then we have the perfect Tia Carrera who we were all in love with in the 90’s; she is the brains behind Connery and Snipes’ investigation as she helps to decipher the contents of a CD which has been tampered with.

Leo Lee shows up but he rarely speaks in any movie; he’s always the cool henchman in the background wearing shades and yet he always made an impression on me and it saddens me that I’ll never as cool as him.

Then you’ve got Ray Wise (RoboCop) as a Senator, Steve Buscemi, Mako and Tatjana Patitz (who gets naked regularly) making for a rather awesome ensemble piece.

Overall, Rising Sun may be a rather slowburn affair, but Connery and Snipes make for an awesome duo and the story has so much going on that I found I couldn’t take my eyes off the screen. There is enough action to keep you engaged and a stellar supporting cast making for a rather underrated action drama.