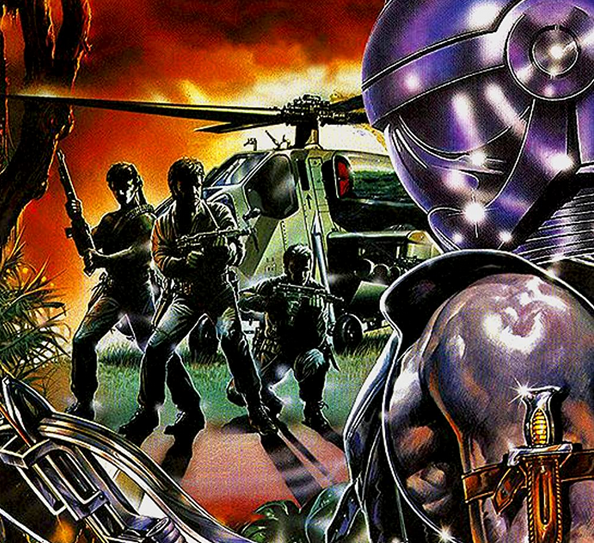 Where Strike Commando was essentially a knock off of Rambo, Robowar is a clone of Predator/RoboCop except with a budget of 4 dollars; it literally has near identical scenes for example, the group of soldiers shooting at something unseen in a jungle then at another point Reb Brown’s Murphy Black says “don’t move” rather than “stick around” after impaling someone. I’m surprised there wasn’t a lawsuit as there is so much that’s similar but Strike Commando helmer Bruno Mattei (under the name Vincent Dawn) really made a career of riffing on bigger Hollywood movies.

Robowar is still a bit of a riot with regular explosions and a cool synth score with electric guitars which sounds like it belongs in another movie.

We don’t have an alien hunter this time but instead it’s a rogue robot weapon that has been set loose in the jungle. Murphy and his group of mercs are sent into the jungle (for some reason) unaware of the threat they were about to face but I’m sure every enemy of theirs knows exactly where they are at all times as they scream constantly and shoot anything that movies. They have absolutely no tactics or stealth; it’s almost like a parody with some dodgy acting too but it just makes it even more entertaining.

The Hunter himself isn’t especially scary looking and isn’t a patch on The Predator but the constant robotic speaking noises it makes gives a slightly creepy vibe and reminds me of the Imperial probe droids from Star Wars.

There is very little in Robowar that’s original and it feels like many other better pictures (even using some footage from Strike Commando and Double Target) but with copious amounts of booze it just becomes even more of a blast.

It does have some amazing dialogue and I think we can all agree this is the highlight:

Mascher: Why do they have nicknames?

Colonel: You should know what the group is called. “BAM.”

There isn’t a single cast member we care about and no one is given any development whatsoever but really, who cares? If you’re watching this movie then you’ll know exactly what you’re in for. This is pure gold from the long lost VHS era which I miss to this day.

Overall, Robowar is a fun knock off of Predator/RoboCop with exploding huts aplenty and a rad 80’s synth infused score; Reb Brown is as entertaining as ever shouting and shooting his way through the jungle so if you haven’t seen this before it’s worth seeking out.