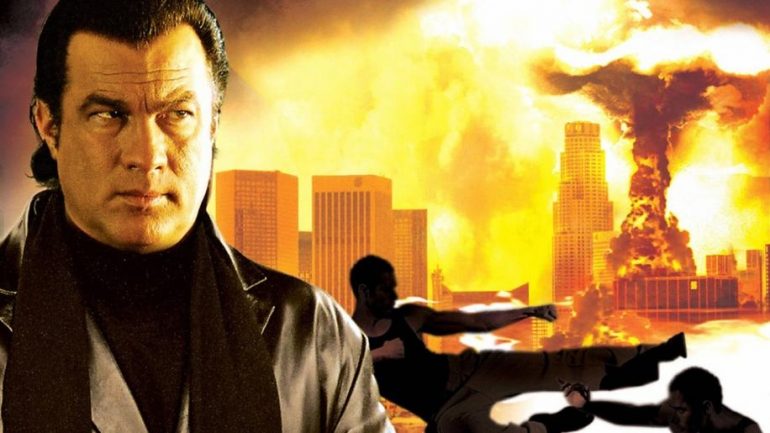 Steven Seagal stars as Jonathan Cold in both The Foreigner and Black Dawn so I thought I would take a look at this brief franchise and save you the trouble of wasting your time.

Plot: A freelance agent must transport a package for a mysterious employer, leading him into a web of betrayal and deceit.

This apparently had a budget of $10 million which I imagine mostly went on the two admittedly impressive explosions and Craft Services. The story started as an intriguing one filled with espionage but instead it ended up being all rather confusing but most of all profoundly dull. As usual these days Seagal is dubbed for a good part of the film and the funny thing is the guy who is doing his voice is arguably the better actor and gives him mildly more personality.

The story is essentially about a package that Seagal is to deliver but then other people want it including some guy’s wife, but it might actually be the husband or the wife or oh who gives a shit? I’d be lying if I understood what was going on for most of this movie and frankly, I stopped caring pretty early on as it never really grabbed me at all.

The fight scenes are few and far between and what there is are pretty pathetic; they are either really slowed down or Seagal is out of shot so we don’t notice it’s his double doing the fighting.

The most entertaining character was Dunoir played by Max Ryan who is wonderfully over the top and seems to be invincible in this movie; at one point he is shot with a shotgun and flies out a window landing on his back. He’s dead. There is no coming back from that. Nope, wait he survives, brushes himself off and continues on his mission of trying to get the package or not getting it or… huh?

This was apparently part of a three-picture deal Seagal had but after Half Past Dead died at the box office The Foreigner went to straight to video Hell where it belongs. I guess the studio just dumped it before it was complete which is why it’s so incomprehensible.

Overall, The Foreigner does at least have 2 awesome explosions and Max Ryan makes for an entertaining nemesis but otherwise it’s not worth wasting your time on.

Plot: Jonathan Cold returns, this time he goes undercover to stop a group of terrorists before they bomb Los Angeles.

It’s the sequel nobody asked for and yet Black Dawn is definitely the better of the two Jonathan Cold movies but that still doesn’t make it particularly great. Seagal is as stiff as a board displaying the usual emotional range of a pencil sharpener but at least he completed this movie and there was no noticeable dubbing.

Too bad he still had his double do pretty much every single action scene. Once again, the fights are filmed so we never actually see Seagal actually doing the moves but the stunts are particularly unconvincing; one scene has Cold jumping out a window but it is clearly not Steven Seagal which totally takes you out of it.

There are also some really bad greenscreen moments – the first has Cold on top of a truck in an admittedly decent car chase however, anytime we see Segal it is clearly on a soundstage. The other moment is at the end when we get the climactic nuclear explosion which also looks pretend so you’ll just spend the final few minutes laughing.

As I said it does at least have a more coherent storyline this time around and I like Timothy Carhart who plays the traitorous CIA Agent Greer.

Jonathan Cold still isn’t much of a character mostly due to Seagal’s total lack of on-screen personality these days. How is this the same guy from marked for Death and Under Siege? He just phones it in now and just doesn’t seem to care.

The opening credits are also annoying with various lines of dialogue repeated ad nauseum just in case we missed them the first 30 times.

In the profile picture I used for this article you see Seagal giving a side-eye to a nuclear explosion (as one does); well next to him are two random guys looking like they are having a martial arts fight… yeah that’s not in this movie… at all.

Overall, I am not spending any more of my time writing about this shit; both these movies are pretty bad even by modern Seagal standards. If you want to watch them then by all means be my guest but don’t say I didn’t warn you.