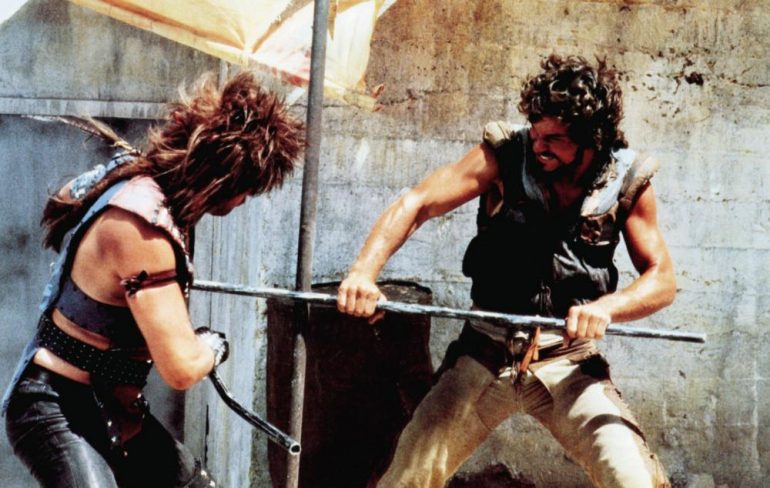 It tells the story of a mysterious warrior called Nomad (Swayze) wandering through the desert who comes upon a group of settlers who are being menaced by a murderous gang that is after the water they control.

This is pretty much the same story as every other post-apocalyptic movie from that era but that’s fine by me.

Steel Dawn is packed with action; Swayze is on badass form as he uses his fists, feet and swords take on enemies with ease.

Although the main villain of the story is Damnil played by the always excellent Anthony Zerbe who has really made a career of playing villains, Swayze’s main antagonist is Sho (Christopher Neame), a ruthless assassin who killed his master/friend early on in the movie.

Despite having a bird’s nest on his head throughout I thought Sho was one of the best characters in it due to his sense of honour. He respects Nomad and sees him as an equal which makes him that little bit more interesting as a character. You almost want him to live in the end but you know that can’t happen after what he has done. His hair really is quite distracting though…

The final sword fight between Nomad and Sho is thoroughly satisfying especially when Sho decapitates a henchman for trying to interfere with their fight.

Keep your eyes open for a young Arnold Vosloo (Hard Target/The Mummy) as another henchman who really shouldn’t play with sharp objects.

Nomad was a cool character and I would have watched him in a sequel or two so it’s a shame that never happened.

After 31 years Steel Dawn is very much a product of the 80’s but as that was the golden age of the action genre then it’s no bad thing. Swayze rules. Period. RIP.