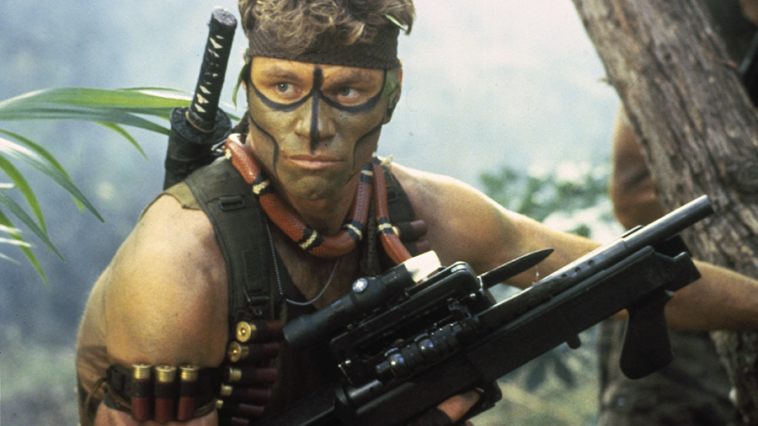 Plot: John Steele is a Vietnam Vet who’s had trouble adjusting to life after the war. He hasn’t been able to hold on to a job which includes being a cop. When his best friend, Lee who also served with him in Vietnam, and who also became a cop was killed by some drug dealers he was investigating. Steele was able to save his daughter and saw one of the shooters. He later sees him and learns that he is the son of General Kwan, another person he served with in Vietnam who was running his own deals on the side, and who tried to kill Steele and Lee but Steele not only survived but thwarted his last plan. Steele suspects Kwan is involved with Lee’s death but unfortunately Kwan’s a respected member of the community. And Steele’s former boss Bennett is not in a rush to find the killers cause investigation reveals that Lee may have been dirty which Steele knows is not true. Steele sets out to prove Lee’s innocence and to get Kwan.

With the recent release of Cobra Kai Season 3 it reminded me just much I love watching Martin Kove on screen; I interviewed him briefly a few years ago and he was just a really cool guy. I am also pretty sure that that he’s a vampire as he has barely aged since the 80’s.

Where would he be without his Vietnam storylines though? With Rambo: First Blood: Part II, Kreese in the Karate Kid and Cobra Kai series, Firehawk and Steele Justice.

Today I thought we should look back at his action classic Steele Justice from 1987.

I adore this movie as it is just so perfectly 80’s; from the very opening where we are introduced to our hero John Steele (Kove) bathed in neon lights on a hovercraft in ‘Nam so you know you’re in for a good time.

John Steele is an awesome action hero name and we know he’s a badass because he keeps a pet snake wrapped around his neck that he calls Three Steps… we find out why later on in the movie. It would have been cooler if it was a Cobra but it probably would have killed him so it’s understandable.

Steele Justice has an awesome music score featuring synths and electric guitars and most importantly a training montage which is something sorely missing from modern action cinema.

It also has a great supporting cast including Ronny Cox, Bernie Casey and Al Leong; how could it be an 80’s action picture and not have Al in it?

Then we have Soon-Tek Oh as the villain General Bon Soong Kwan with his son Pham Van Kwan played by Peter Kwong who are both suitably hateful.

Bernie Casey plays John’s ally Tom Reese who is one year away from retirement… uh oh! You may think that he won’t live to see the end credits but even though het gets shot he lives and will get to see his retirement.

If your action hero isn’t shirtless with an ammo belt draped around him for the final battle, is it even an action movie?

I love in classic action movies how after our hero has blown away hundreds of bad guys he walks away at the end with barely any consequences. After the climactic battle Steele’s ex-boss (Ronny Cox) asks if he wants his old job as a cop back… so he isn’t going to jail then?

Overall, Steele Justice is just a blast with Martin Kove perfectly cast as our snake wielding hero; it has an awesome music score and is packed with action. Remember! The only law is the Black Tiger’s.