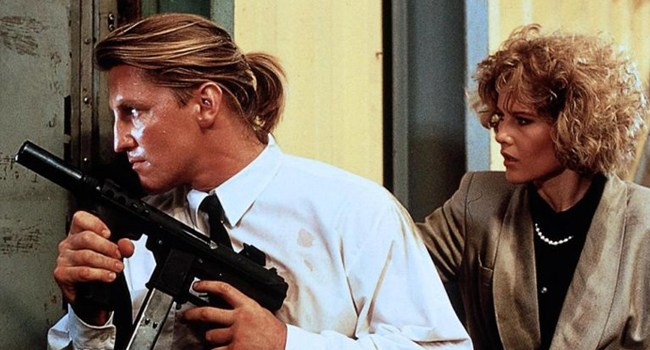 Stranglehold is one of the many low budget Die Hard knock offs that were cropping up every week during the 90’s; this one stars Jerry Trimble as our hero former Secret Service agent Ryan Cooper who turns into John McClane when terrorist leader Gerald Richter (Vernon Wells) takes over a chemical weapons facility and holds a congresswoman hostage.

This is the ultimate guilty pleasure movie and by God is it entertaining; Wells hams it up as the villain and is even funnier than Bennett from Commando. It’s like he just knew exactly the kind of movie he was in and just totally went for it.

Trimble had the moves and has plenty of ass kicking moments but the script and acting in general are pretty terrible… and yet awesome at the same time.

90’s B movie favourite Jillian McWhirter (Bloodfist movies) pops up again and she plays the congresswoman taken hostage by Richter but she sadly doesn’t get to have any fights.

It’s only 73 minutes long and is filled with constant action; it doesn’t waste time with stupid things like character development; it’s just explosions, shoot-outs and punches to the face which is all you’d want from a movie like this.

The 90’s were a great era for the action B movie and although Stranglehold has aged quite badly, it’s still a lot of fun.

Directed by B movie champ Cirio H. Santiago (RIP) you know what you’re going to get right off the bat as he is the man behind the likes of Firecracker, Equalizer 2000 and the 1988 film The Expendables. Despite his limited budgets his movies always had tons of action and delivered simple bud satisfying action movies.

Overall, Stranglehold isn’t a great movie but it’s not short on entertainment value and is worth a watch purely for Vernon Wells in villain mode.