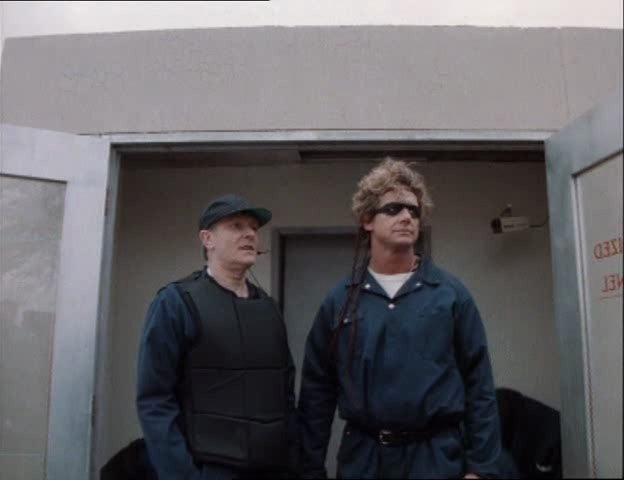 I love movies like this: Don “The Dragon” Wilson vs. Roddy Piper in a Die Hard scenario? Hell yeah! Terminal Rush is the kind of movie that’s beyond criticism. I mean yes you could say some of the acting and dialogue aren’t the greatest but that’s part of the fun.

Any movie that opens with a bar fight immediately has my attention and it never really lets up either. Wilson kicks all kinds of ass as always and Roddy Piper plays a henchman called Bartel who wears warpaint around his eyes for no reason whatsoever but it doesn’t matter as he’s just awesome anyway. I miss Piper’s presence from action movies as he’s always been fun as either a good or bad guy.

The main villain of this piece is Harrison Dekker (Michael Anderson Jr.); you can never go wrong with an English antagonist as they just need to sneer and generally be mean. Dekker is a nasty piece of work even beating up Don Wilson’s dad at one point. I was hoping he would die a hilariously over the top death but sadly it wasn’t meant to be which was disappointing.

I watched Terminal Rush on Shout TV and for some reason all the swearing was edited out which made no sense so I would avoid that version and try to find the uncut edition.

There’s still plenty to enjoy with a huge bodycount and Wilson has the moves to take on an entire army with ease; the ending fizzles out a little and as I said I wish some of the bad guys had more spectacular deaths but then I am a bit of a weirdo.

Overall, Terminal Rush isn’t exactly a classic but it’s a lot of fun with Don Wilson bringing the pain to numerous foolish terrorists who get in his way and Roddy Piper as an over the top villain with some choice dialogue like “let’s get it on”. At my signal, unleash beer!