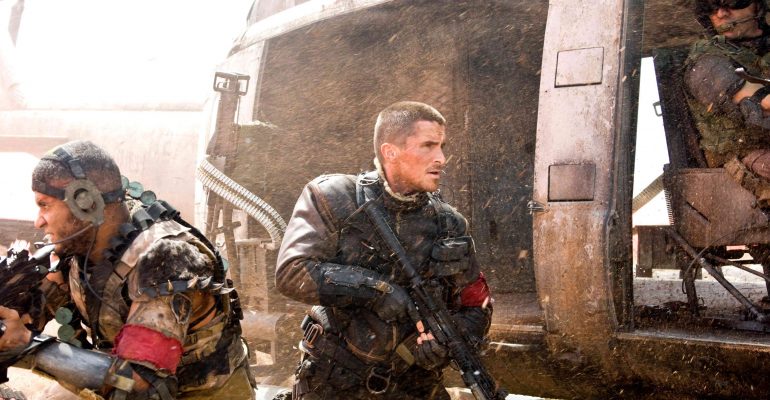 Plot: Although Judgment Day has in fact occurred, the future for which John Connor (Christian Bale) was prepared has been partly altered by the appearance of a stranger named Marcus Wright (Sam Worthington). Connor must determine if Wright has been rescued from the past, or sent from the future. As the machines prepare for a final battle, Connor and Wright delve deep into Skynet’s heart, uncovering a secret that could lead to the annihilation of mankind.

This year marks the 10th anniversary of Terminator Salvation so I thought now would be a good time for a revisit.

Of all the Terminator movies after the first 2 I think Salvation may well be my favourite; it’s certainly not a perfect film by any means but I thought it got the tone better after the parody that was the majority of Rise of the Machines.

Although for some reason he feels more like a side character Christian Bale brings genuine intensity to the role of John Connor and I really liked Anton Yelchin as a young Kyle Reese. He was far more believable than Jai Courtney was in Genisys and was almost (but not quite) as intense as Michael Beihn in the original classic.

This was the period where Hollywood was trying to make Sam Worthington the next big action star so he was essentially the lead as cyborg hero Marcus. His accent is never convincing but he does bring ruggedness to the role which makes him believable enough. He hasn’t really headlined too many blockbusters recently so I imagine the Avatar sequels will put him back on top.

Moon Bloodgood looks incredible in this movie and it’s nice to see that even after the apocalypse the machines clearly provide an excellent dental plan as her teeth are flawless… so maybe Skynet aren’t so bad after all.

Terminator Salvation has some impressive visuals and set-pieces; I thought the Harvester Terminators were the stuff of nightmares and the noise they made was reminiscent of War of the Worlds. Salvation brought back some of the horror elements to the series with humans being farmed like cattle and a feeling of desperation throughout.

Humour is kept to a minimum but you can’t help but feeling it would have worked better as an R-rated feature just to up the intensity; it wouldn’t have guaranteed it as a better movie as part 3 was rated R and well… it wasn’t very good but this is a series that benefits from disturbing moments of violence.

Danny Elfman provides the score and he keeps at least the final few bars of Brad Fiedel’s classic theme but it’s really rather disappointing and no one can provide that industrial sound the way Fiedel did with T2. If they don’t bring him back for Terminator: Dark Fate later this year then why even bother with it?

One thing that’s missing from this movie is the laser guns from the future scenes so the weapons are less interesting; I always wanted Salvation to be a full movie essentially of the opening scene from T2 which for some reason they refuse to do despite that being the only interesting thing they can do with the series at this point.

There is still plenty of action and it’s well paced but more importantly director McG wasn’t afraid to do something different rather than redoing the time travel element.

At 10 years old Terminator Salvation has plenty to enjoy and isn’t as bad as many say; it’s not a patch on the original 2 classic movies but it’s the best of the other movies. Let’s hope Dark Fate is something truly spectacular so the series can get the finale it deserves.