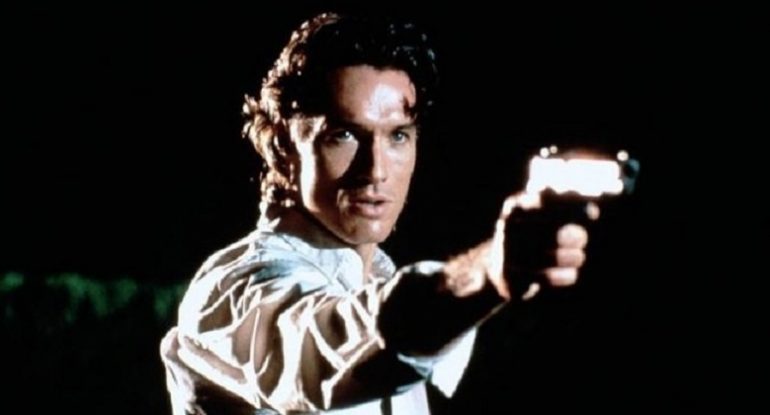 If you have Amazon Prime you may be interested to know that the Crackerjack trilogy is on there; I had only ever seen the first movie with Thomas Ian Griffith before so I figured it was time to watch all three and do a write up.

Plot: After losing his wife and kids to a mob hit, Chicago cop Jack Wild (Thomas Ian Griffith) agrees to accompany his brother’s family on a holiday at a ski resort in the Rocky Mountains. Unfortunately, the resort is also playing host to a mob boss (George Touliatos) carrying a stash of stolen diamonds, as well as neo-Nazi Ivan Getz (Christopher Plummer) who wants the loot for himself. Soon, the entire resort is taken hostage and Wild is the only one able to put a stop to it.

Crackerjack stars Thomas Ian Griffith doing his best John McClane impression in his version of Die Hard except this time it’s in a mountain top resort which gets taken over by terrorists searching for diamonds.

It’s very much low budget B movie territory which is just my kind of jam so expect one-liners, fights and explosions.

Although Crackerjack lacks the budget of Die Hard it’s still a lot of fun mostly due to Thomas Ian Griffith spending the first half of the movie acting like a dick to his family and then in the second half, he takes out the trash. A lot of lines of dialogue and scenes feel very familiar as they are lifted from other movies, but I can’t find it within myself to dislike this movie.

Christopher Plummer hams it up as the villain Ivan Getz who tries his best to be Hans Gruber but the script just isn’t quite up to Die Hard’s. One of the highlights is as always Vladimr Kulich as one of the henchmen who has a change of heart which was a nice twist.

You never really get the impression that this takes place on a real mountain resort as it all looks like it is filmed on a set using miniatures which is yet another reason to just love this movie.

I do wish it had a few more fights and Ivan’s death was relatively anti-climactic but it’s still a well paced 95 minutes.

Overall, Crackerjack is worth watching if you’re a fan of cheap Die Hard clones and of course the awesome Thomas Ian Griffith so grab some libations and enjoy the ride.

Plot: A police officer discovers that an infamous terrorist is on board a train that is transporting his girlfriend and some rich businessmen. Without a moment’s doubt he decides to save everyone from the clutches of the terrorist.

Thomas Ian Griffith didn’t return for Crackerjack 2: Hostage Train and is replaced instead by legend of action Judge… Reinhold!?! He’s still playing the same character (Jack Wild) but it’s hard to take him seriously as Reinhold has such a comedic face and he always looks like he’s trying not to laugh. I can’t believe him as a badass action hero and he lacks the fighting skills of Griffith.

Where Crackerjack was essentially Die Hard this sequel is really just Under Siege 2 without the amazing dialogue like “he’s the best there is”.

Karel Roden (Hellboy) always makes for an effective villain and his character Hans Becker is the man responsible for murdering Jack’s wife Amy. He isn’t the main antagonist however; the real bad guy is Smith played by Michael Sarrazin but he is far less intimidating a presence and I feel like Becker should have just been the big bad.

Once again this has a pretty low budget and yet there are lots of explosions and several fight scenes throughout. I always found the opening sequence rather impressive with some decent practical effects even if it feels like that’s where most of the budget went.

I find the unnecessary dental surgery scene a tough watch (as you’d expect) but it shows just how evil the bad guys are.

There’s not much else to say about Crackerjack 2 other than it’s mostly entertaining for the wrong reasons with Judge Reinhold making for an unconvincing action hero and a plot we’ve seen many times before. If like me you love B movies however, you’ll still find something to enjoy.

Plot: A group of retired spies who were once enemies are forced to work together in an attempt to retrieve a neutron bomb stolen by a group of new-wave, high-tech operatives who have supplanted them in the post-Cold War intelligence game.

I think when I reach the end of my days and look back on my life I’ll probably regret wasting time watching as many crap movies as I have and this is certainly one of them. Crackerjack 3 is one of the worst movies I’ve ever seen with very few redeeming features and it’s 90 minutes I’ll never get back.

This could have easily been called anything else as it bears no resemblance to the other two Crackerjack movies but I was intrigued due to the cast featuring Bo Svenson, Olivier Gruner and Leo Rossi.

Sadly all are wasted on a tedious story with very little in the way of interesting action scenes but instead we get a bunch of old men talking a lot while Olivier Gruner is the only mildly redeeming feature as the smug villain who does the best he can with the dire script.

I enjoy old guys kicking ass except there is very little in the way of ass kicking in Crackerjack 3 although the addition of exploding gnomes is certainly new.

One review I read for this described it as a farce and that’s the perfect word for this piece of shit movie. The script is terrible, there is no tension and it’s filled with unfunny humour and terrible music. I didn’t even want to finish watching it but forced myself just so I could write this review.

I was hoping there would at least be a decent fight with Gruner at the end and although he and Svenson do throwdown it’s not remotely exciting and once again delivers zero thrills.

Overall, I won’t waste any more of time on this crap; never watch this movie as it’s just appalling in every way and I’ve seen better film on teeth.