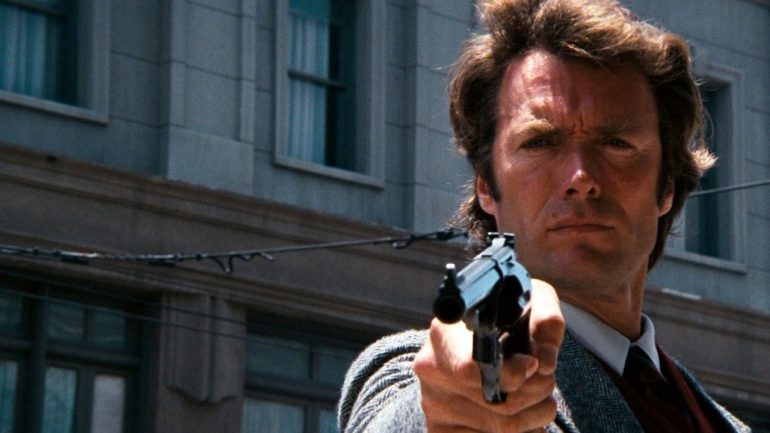 Dirty Harry became one of the most iconic characters in cinema history and was the template for what would become the action hero cop in the 70’s, 80’s and 90’s. Clint Eastwood has never been more badass than in this series and Harry Callahan is arguably his best character to date so I thought I would take a little look back at the series.

Plot: Cop Harry Callahan (Clint Eastwood) attempts to track down a psychopathic rooftop killer before a kidnapped girl dies. When he is found Harry abuses the murderer’s civil rights putting him back on the streets. Once he is released he hijacks a school bus and Harry must go after him again. The only way to stop this vicious killer is in cold blood.

Dirty Harry laid the groundwork for tough guy cops in movies but I don’t think anyone ever really topped Clint Eastwood who has always been the master of sarcastic line delivery. He also did his own stunts proving that he was every bit the real life action hero.

Robert Mitchum turned down the role of Harry allegedly stating it was “a film I would not do for any amount” but I think Eastwood was born for the role and it’s because of him that he became so iconic.

The script to this day remains sharp and daring with a lot of dialogue you simply couldn’t get away with due to Harry’s total lack of political correctness. There are so many quotable lines but I think we can all agree that “”You’ve got to ask yourself one question: ‘Do I feel lucky?’ Well, do ya, punk?” ” is one of the greatest action movie lines of all time but Harry’s withering condemnation for authority and people in power makes him remain such a great character. Eastwood’s matter of fact delivery and sly glint in his eye just makes the character all the more endearing no matter what he says.

In this first entry Harry is after a vicious killer known as Scorpio and Harry will stop at nothing to take this psychopath down. The killer is played by Andrew Robinson in one of his creepiest roles to date making him one of the most memorable villains of the genre. I was reading on IMDB that Robinson created a backstory for Scorpio which involved him being drafted into the Vietnam War, and seeing unspeakable horrors. When he returned home to the United States, he found himself a figure of hate, and his war experiences, combined with the people’s treatment of soldiers, caused him to go insane.

There is plenty of action with Harry shooting bad guys and asking questions later which hilariously upset the critics of the time. Lalo Schifrin provided the music score which is very 70’s sounding but works perfectly in creating the gritty vibe of the streets.

Overall, it’s hard to believe this movie is 47 years old and it’s arguably still my favourite of the series; it holds up well with one of the most entertaining scripts of all time, plenty of action, a great leading man and an awesome villain. A classic. Period.

Plot: Dirty Harry is on the trail of vigilante cops who are not above going beyond the law to kill the city’s undesirables.

Dirty Harry returns in this equally awesome sequel to the classic original. Eastwood is the epitome of cool in this role and his refreshing political incorrectness and lack of respect for the rules continues where he once again has a one-liner for every occasion.

Like the first movie, the script just sizzles; Clint utters the sharp dialogue but it doesn’t skimp on the fantastic 70s grittiness either.

It’s violent and is a bit more action oriented than the original with some great car chases; why did car chases seem cooler in the 70s?

It has a great twist at the end and the story of vigilante cops is gripping; it is a little long though and could maybe have had a few minutes trimmed here and there but I still love it.

Obviously some of it is a bit dated now with the clothes and music, but it happens and I never really consider that a worthy criticism of a movie. Everything dates eventually and all your current favourites will seem pretty bad in 30 years too.

Overall, Magnum Force is a cracking follow up to one of the best action movies of all time. Clint Eastwood owns the role of Harry Callahan and if anybody even suggested remaking this, I would be forced to pimp slap them.

Plot: Police officer “Dirty Harry” Callahan (Clint Eastwood) is reassigned from homicide to personnel after his latest use of excessive force. Meanwhile, a terrorist group calling themselves the People’s Revolutionary Strike Force organizes a series of crimes in San Francisco, hoping to enrich themselves. When they kidnap the mayor (John Crawford) and steal rockets and rifles for their next attack, Harry and his new female partner, Inspector Kate Moore (Tyne Daly), must stop the terrorists.

In this third entry of the Dirty Harry series our hero is assigned a female partner and is none too pleased about it; when a terrorist group comes along, Kate Moore (Tyne Daly) more than proves her worth. Daly is a very believable cop who is constantly trying to prove herself in a predominately male profession.

Callahan as always has some seething one liners and manages to look at everyone with complete derision. He still doesn’t like to play by the rules and he even gets shouted at by his shouty police captain in one of the early scenes. Harry remains a total wish fulfillment character where he does what he wants and has a line for everything. He doesn’t make it easy for people to get close to him which is a good way to be in my book as then the bad guys don’t have any leverage against him.

Where this movie falls down compared to the classic first two chapters are the villains; whereas Dirty Harry had Scorpio (who was just a terrifying maniac), this terrorist organization doesn’t have any backstory and they are a bit forgettable. This also has, dare I say it, a lighter tone and isn’t quite as gritty as the first movies.

The Enforcer does have an action-packed finale though which takes place on Alcatraz and may be one of my favourite scenes of the series.

The script as as quotable as ever too and the acting for the most part is decent from the main cast.

My favourite line has to be:

Overall, The Enforcer isn’t quite as good as Dirty Harry and Magnum Force due to bland villains but Eastwood’s sheer badassery in the role and an action-packed finale make it worth a watch.

Plot: Jennifer Spencer (Sondra Locke) was gang raped, but the crime went unpunished. Now she demands revenge, killing off the men that attacked her years before. The murders attract the attention of Harry Callahan (Clint Eastwood), who is on a forced vacation due to his violent approach to police work. The case gets complicated when Harry develops a relationship with Jennifer, and it’s up to Harry to make the right decision when Jennifer’s life is threatened for a second time.

Sudden Impact is directed by Clint Eastwood and once again has some classic dialogue and it’s this movie where he says the now legendary “Go ahead… make my day” which is one of my favourite scenes in the series.

As stated above Harry is forced on vacation as his way of doing things just isn’t by the book but that doesn’t stop him from getting involved with Jennifer as she takes down the people who gang raped her.

This one is a tough watch due to the rape stuff but it’s certainly an emotionally engaging story and you are 100% on the side of Jennifer as she takes sweet revenge. It’s more straightforward and despite coming out in 1983 it has a 70’s exploitation vibe to it maintaining that grittiness.

Harry still has a problem with authority and his interactions with his superiors as always provide a good few laughs. I disagree with Harry on his thoughts regarding hot dogs; I put ketchup and mustard on mine which means he’ll probably shoot me…

I love the finale in this one when the bad guys are attacking Jennifer and one of them turns around and see’s Harry’s silhouette and he knows they are just plain fucked; It climaxes with one of the best bad guy deaths of all time where he his holding Jennifer hostage on top of a roller coaster (as you do); she then elbows him so Harry shoots him a few times, he then falls through some lights, then a window and is finally impaled on a unicorn’s horn on a kid’s carousel. That’s gotta hurt!

Overall, Sudden Impact is another great entry in the series and may be one of my favourite sequels; it has memorable dialogue, some great action scenes and Eastwood at his badass best.

Plot: In the fifth installment of the Dirty Harry series, gritty cop Harry Callahan (Clint Eastwood) is fresh off the conviction of a major mob boss. When horror film director Peter Swan (Liam Neeson) develops a “dead pool” betting on celebrity deaths, he is shocked when a serial killer begins targeting those named, including TV reporter Samantha Walker (Patricia Clarkson) and Callahan himself. Action and violence abound as Callahan tracks the killer in an attempt to stop the murders.

Widely regarded as the weakest of the Dirty Harry series The Dead Pool certainly has its faults but I find it impossible to dislike a movie with Harry Callahan in it. The first time I watched The Dead Pool a few years ago I generally didn’t like it but it has since grown on me since then.

It feels more like your standard 80’s cop actioner but Eastwood still brings the acerbic wit as Harry this time spouting lines like “opinions are like assholes… everybody has one”.

The supporting cast is equally impressive including a young Liam Neeson and Jim Carrey. Neeson plays prick-ish director called Peter Swan while Carrey plays drug addict/star Johnny Squares. It’s not a huge role but it’s cool to see Carrey in a different kind of non-comedic role. Not sure what kind of accent Neeson was attempting but he can never hide his accent anyway; he plays Swan well making him a believable asshole and the type of person you meet regularly in the industry.

The Dead Pool has a go at the culture of celebrity with Harry being elevated by the media for being a cop who gets results meanwhile he just wants to be left alone to do the job as he sees the media as only out for themselves.

In terms of action there is a hilariously awesome car chase with Harry and his new partner Al Quan (Evan C. Kim) driving around San Francisco pursued by a miniature remote controlled car.  It has a bomb attached to it and I often wonder how the killer is able to drive his own car at the same time as being able to control the small one so efficiently. It’s preposterous stuff but awesome at the same time.

When the big reveal comes as to the identity of the killer it’s a bit of an anti-climax but it does have a classic bad guy death involving a harpoon gun which is immensely satisfying.

Overall, The Dead Pool may not have the same grittiness as earlier series entries but Eastwood is always watchable and seeing him share the screen with Liam Neeson is awesome. It’s not an amazing movie but it’s still a lot of fun with some crazy ideas.