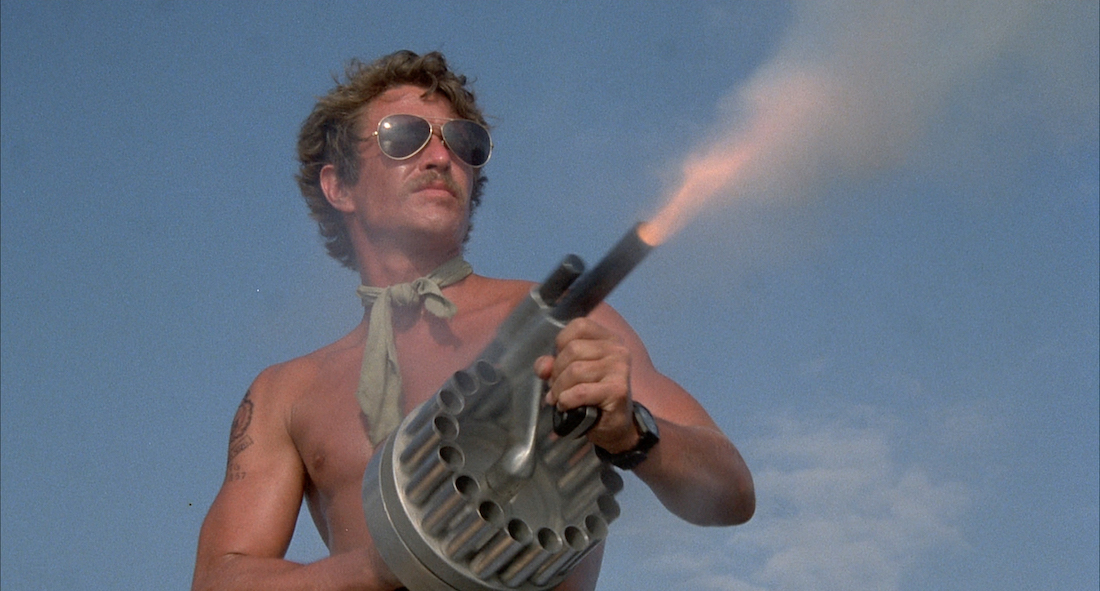 Plot: Mercenary soldiers Jamie (Christopher Walken) and Drew (Tom Berenger) are hired by a large corporation to liberate Zangaro, a small African nation, from an iron-fisted despot. Once there, Jamie ends up in jail. After being brutally tortured, he is helped by Dr. Okoye (Winston Ntshona), a political prisoner, and learns more about the plight of the country’s people. After Jamie is freed, he becomes disillusioned with his wealthy employers and joins the Zangaro people on the revolutionary front.

Based on the novel by Frederick Forsythe The Dogs of War stars Christopher Walken who leads a group of mercenaries (including Tom Berenger and Paul Freeman) to remove a dictator from the African nation of Zangaro. The film has a stunning opening with a plane taking off surrounded by explosions promising a rousing action spectacular. It isn’t until the final 25 minutes when the film delivers on that promise while the rest of the film has Jamie (Walken) visiting Zangaro to do recon but he eventually gets captured and tortured. Once he is freed he heads back home and is asked to get a squad together to take down the dictator.

The Dogs of War may not be quite as exciting as it could be with a mild pacing lag in the mid-section but I love Christopher Walken’s character Jamie who is unpredictable and almost as ruthless as the people he is fighting. He is built for war and shows little remorse after killing people in cold blood but this makes him the perfect man for the job.  The movie shows how war truly changes you as most who have faced it come back emotionally or physically damaged.

This came out before Raiders of the Lost Ark but not only does Paul Freeman show up but so does George Harris (Col Bobi) who would end up playing the freighter ship’s captain, Katanga in Raiders the next year.

I always like looking up trivia about some of these older movies and I found out that director John Irwin had been in warzones like Vietnam as part of a news crew so he got to find out how real mercenaries behave which gives the film more authenticity while also explaining why our “heroes” are so ruthless.  Tom Berenger was also apparently unhappy with the finished version of the film as a lot of his role was cut out including scenes involving his wife.

It’s the last 20 minutes which elevate this film as the final battle is worth the build up giving us plenty of explosions and shoot-outs making for a satisfyingly bloody finale.

Overall, The Dogs of is a little slowburn in parts but Walken is magnetic and the supporting cast are faultless; the final 20 minutes gives us action nirvana while also showing the impacts of violence.