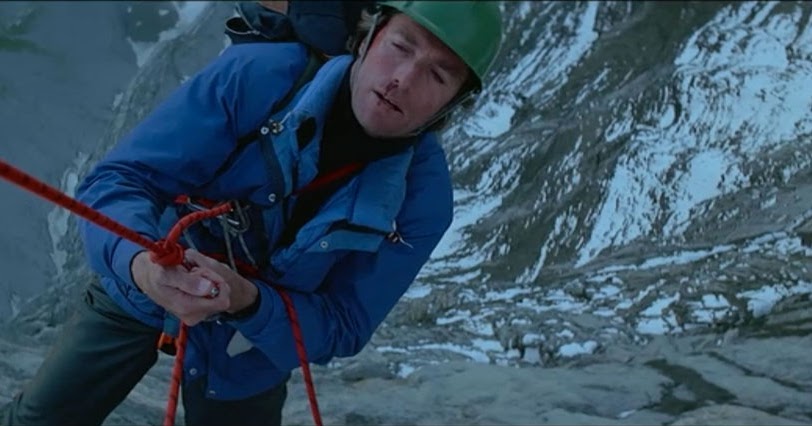 If ever there’s a movie that wouldn’t get made today it’s The Eiger Sanction directed by and starring Clint Eastwood.

It tells the story of former government assassin Jonathan Hemlock (Clint Eastwood) who now devotes his time to teaching and collecting paintings, but his quiet life is interrupted when he is persuaded by his former employers work for them again. Hemlock has to join a crew of explorers (George Kennedy, Jack Cassidy) on a trip up the Eiger, a treacherous Swiss mountain. Hemlock must simultaneously determine which of his fellow climbers is a Soviet spy, kill his target and scale the deadly peak.

Practically every line of the acerbic dialogue would offend someone today which is why this movie is still so awesome. The script is consistently sharp and the story is essentially Dirty Harry climbs a mountain with a side order of James Bond. One of the main characters is a mysterious Albino called Dragon who is the man that hires Hemlock to “Sanction” potential spies on a mountain; Dragon is purely a James Bond character in all but name and he’s fabulously creepy.

In the first half of the movie there’s a villain called Miles Mellough who is hilariously camp and has a small dog called “Faggot” (yup). I’m pretty sure Tom Ellis’ Lucifer from the TV show is inspired from him as his delivery is very similar.

Raiders of the Lost Ark seemed to borrow a few scenes from this movie too including Hemlock in the classroom with the female students flirting with him.

Hemlock has a glorious don’t-give-a-shit attitude where he pretty much insults everyone and bangs every chick that gets in his way rapidly followed by them trying to kill him. At one point a woman who is training him for the mountain called George tries to motivate him to keep going by flashing her breasts… it works.

It’s a little slow in parts but I found the storytelling was first rate as it built up the character relationships nicely so we cared what happened to them. You believed the friendship between Hemlock and Ben Bowman (Kennedy) and they have some great banter. I was laughing for the majority of the movie as there are one-liners galore.

The scenes on the mountain are truly spectacular and never fail to impress; there is no blue-screen work here and it looked like Eastwood was really doing all of those stunts. There are a few fistfights with Hemlock always coming out on top but when they get to the mountain things start to get really tense and unpredictable.

John Williams provides the score and it’s suitably epic and John Williams-y although maybe not as memorable as his more classic themes.

If you haven’t seen The Eiger Sanction then you should check it out as the mountain climbing scenes are still amazing and the script is consistently sharp with Eastwood at his cool best.