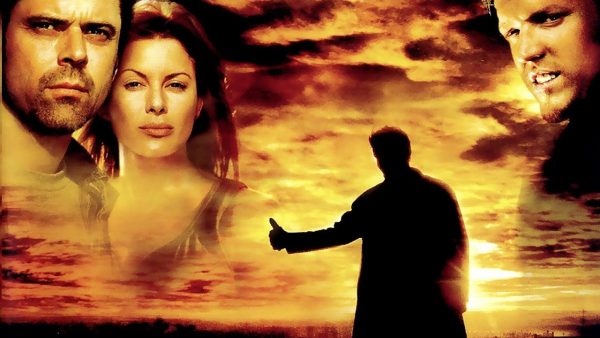 Plot: Years after being traumatized by a hitchhiker, Jim Halsey (C. Thomas Howell) is trying to piece his life back together. After being suspended from the police force, he decides to return to Texas to speak with a friend about his problems. He reluctantly agrees to let his girlfriend, Maggie (Kari Wuhrer), join him. As they drive, Maggie lets a stranded driver (Jake Busey) into the car. Halsey becomes suspicious and kicks him out, but the stranger returns, undeterred, to wreak havoc.

I go into some major spoilers here so if you haven’t seen the movie best look away.

The original Hitcher starring Rutger Hauer and C. Thomas Howell is an expertly crafted piece of action horror with Hauer at his quietly menacing best. He never needs to say anything to look terrifying and the mysterious Hitcher is one of his finest characters to date.

The belated 2003 sequel entitled The Hitcher II: I’ve Been Waiting was widely derided when it first came out so I thought I would give it another look to see if it really is that bad. I can safely say that it hasn’t gotten any better with age and is still an inferior sequel in every way. To go from Rutger Hauer to the not remotely threatening Jake Busey is a major step down; as I said before I’ve always found Busey to have a friendly/comedic face so I can never really find him scary at any time.

It’s cool that C. Thomas Howell returns and is essentially suffering from PTSD, never having fully recovered from his traumatic ordeal with Hauer’s Hitcher years before. It was certainly a ballsy move to kill him off half way through and have his girlfriend take over the lead role. It’s a shame they didn’t make her remotely likable despite the fact I used to be totally in love with Kari Wurher in the 90’s.

She makes so many stupid decisions in this movie that I was actually on the side The Hitcher. “I know what to do; this guy who has been harassing me all day, murdered my boyfriend and killed several people is driving a truck down the road so I’m going to steal a plane and fly over him repeatedly… but do absolutely nothing else.” What. The. Fuck. What were you trying to accomplish?!?!

There are just far too many moments that are unlikely that you never really care what’s happening or what happens to any of the characters. It is at least well paced and is a more straightforward action thriller but it sorely lacks any of the tension the original oozed.

There are a couple of tense moments and The Hitcher’s eventual death is quite spectacular but this movie lacks any of the subtlety of the original and doesn’t do enough that’s new to be memorable. There are plenty of worse films out there and it’s fun to watch on a drunken Saturday night but I’d hitch a ride with the original classic instead.