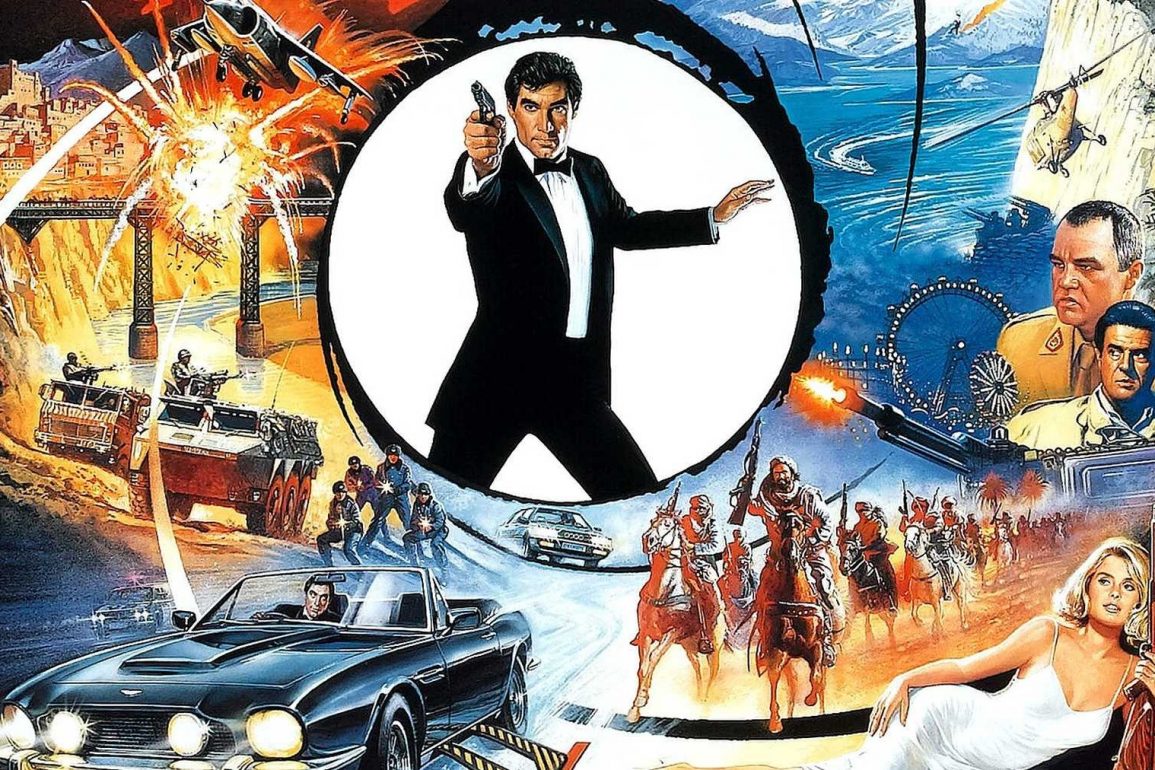 It had been several years since I last watched The Living Daylights; I’ve always liked Timothy Dalton as Bond and thought he was arguably the most similar to Ian Fleming’s character. In Casino Royale he is described as “slim build; a three-inch long, thin vertical scar on his right cheek; blue-grey eyes; a “cruel” mouth; short, black hair, a comma of which rests on his forehead. Physically he is described as 183 centimetres (6 feet) in height and 76 kilograms (168 lb) in weight.” We’ve never had a Bond with the scar on his right cheek, but I doubt he would be that popular with the ladies so I think it was wise to not incorporate it into the movies.

Dalton is slim and tall (187 Centimetres) with the short black hair and very much looks the part. He brings the required ruthlessness to 007 and it’s one of the most serious incarnations of the suave British spy long before Daniel Craig took on the role.

Bond still has a few one-liners, but Dalton comes across as angrier and at times impatient making him more convincing in the role as you feel someone in that line of work would behave like that when lives are at stake.

The Living Daylights is a far cry from the Roger Moore days which is what they were trying to get away from. Moore had turned the character essentially into a parody (even if I still adore Moore as Bond) so this reboot of the character was taking things back to basics and (for the most part) keeping the story more realistic.

As much as I enjoy Dalton as Bond I think of his two movies I far prefer License to Kill as the story was just more interesting. The Living Daylights lacks a truly memorable villain with Joe Don Baker only in a few scenes and General Georgi Koskov (Jeroen Krabbé) never coming off as all that intimidating.

I also never understood why they brought back Joe Don Baker for Goldeneye as a totally different character; I remember when I saw Goldeneye for the first time I thought “wait, didn’t he die at the end of The Living Daylights?” then I realised he was playing someone new and was thoroughly confused.

On an interesting sidenote – apparently Lee Van Cleef was considered for the role of Brad Whitaker which would have been amazing; too bad we never got to see that.

The real star of the show in terms of antagonists has to be Necros (Andreas Wisniewski from Die Hard) who is as cold as ice and enjoys killing people with his headphones. He is very much the over the top Bond henchman and his exploding milk bottles demonstrate that this movie doesn’t take itself that seriously. Necros’ climactic fight with Bond on the back of the plane is one of my favourite fights from the film as it incorporates some incredible stunt work.

The action in this movie is superbly executed with countless impressive set-pieces with the battle in the desert at the end especially memorable.

Maryam d’Abo remains one of my favourite Bond girls as she is far from a damsel in distress; she is not only beautiful but intelligent and she becomes a badass warrior during the final battle. She essentially becomes 007’s conscience in this movie too wanting him to not go after Georgi even if she knows he has to do it.

John Barry was the sound of James Bond and although I loved David Arnold’s scores to Pierce Brosnan’s Bond films it’s Barry who made the music so iconic. You can always recognise his scores within the first few bars and The Living Daylights has a fantastic score that may sound a little 80’s by today’s standards but it is still every bit as thrilling as it was way back in 1987. This was the final Bond film he would score and was a fitting end to his work on the franchise.

A-ha provided the main theme and admittedly I’ve never loved this song; I think it’s fine but I far prefer A View to a Kill from Duran Duran or Live and Let Die. The main thing I take away from it was I remember how much John Barry hated working with A-ha and I believe he called them “arseholes” who were difficult to work with. I do have a soft spot for “Where Has Everybody Gone?” by The Pretenders which is heard regularly throughout the film.

I’ve often wondered if the filmmakers have struggled to keep Bond relevant after the Cold War as it was during this period that he had the best storylines and it’s a big part of The Living Daylights. Since the Cold War has ended the focus has instead moved onto more modern threats like technology which works but is mildly less interesting.

Like Rambo III the end of this movie has Bond teaming up with the Mujahideen, a guerrilla group operating in Afghanistan who would later split into rival factions with one of them becoming the Taliban. The always reliable Art Malik (and his amazing voice) was cast as the leader Kamran Shah who would work with Bond to take on the Russians for the final battle.

Overall, The Living Daylights may not be as good License to Kill but Dalton makes for a daring new Bond similar to the way Ian Fleming described. The world wasn’t quite ready for him yet however, which is too bad as I thought he was well cast and would have liked to see him in more movies. The action still holds up with some jaw dropping stunts and Maryam d’Abo is still one of my personal favourite Bond girls. It needed a better villain but it is still classic Bond and a welcome addition to the franchise.