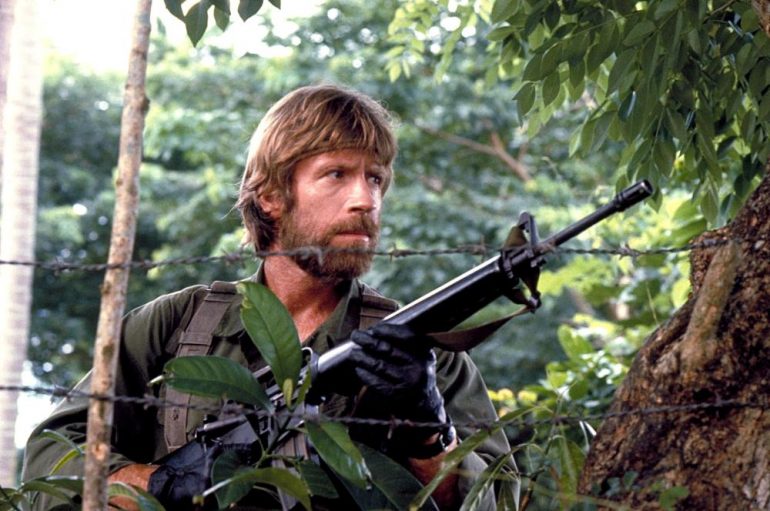 Revisiting The Missing in Action Trilogy

Chuck Norris stars as Colonel James Braddock, an Ex ‘Nam POW who decides he’s had enough with the lies of the Vietnamese Government and wants to prove that there are POW’s still left in ‘Nam. It’s practically identical in story to Rambo First Blood: Part II, but not quite as awesome. It’s the kinda movie where you grab a sixer of PBR and order in a pizza on a Saturday night, unplug the phone and enjoy some old-school action.

The MIA series is arguably some of Chuck’s best work as they are genuinely entertaining action movies. The acting is (for the most part) pretty decent and there is some great action towards the end.

The main problem is the rather slow first half of the film; it opens strongly with a great flashback to Braddock attempting to escape but ends up getting captured. We then flash forward to a hotel room with Braddock reminiscing about the Hell he went through. It’s here where he makes the choice to go to Saigon and prove that there are POW’s still out there.

Don’t be expecting too much martial arts in this one; it’s more shoot ’em up type stuff, but the action still kicks all kinds of ass. Real explosions and real stunts… remember them?

As previously mentioned, the pacing is a bit off in the first half with a lot of messing around in Saigon and not nearly enough necks being snapped. Thankfully the final 20 minutes more than make up for it with some great action set-pieces. There is a great slo-mo shot of Braddock coming out of the water and pumping some nameless bad guys full of lead. USA USA USA!

The score is suitably 80’s style by Jay Chattaway but that’s no bad thing; he did do the music to Red Scorpion after all which is a great action score; although this isn’t quite as memorable, it certainly does the job.

Overall, Missing in Action is a perfect reminder of the good old days of action movies, where a one man army could take down and entire Continent of bad guys without breaking a sweat. The pacing is off in the first half, but it makes up for it in the final act with plenty of boots to asses.

Proof that not all prequels suck; MIA 2 is arguably the best of the series which manages to be quite harrowing and yet entertaining at the same time.

This is set before the first MIA film and tells the story of how Colonel James Braddock survives his time in a Vietnamese POW camp at the mercy of the sadistic Colonel Yin.

What ensues is a battle of wits as Yin tries to convince Braddock to admit to committing war crimes. Yin is not beyond torturing Braddock’s fellow American POW’s in order to get what he wants; Braddock eventually relents and signs the form admitting he’s war criminal but Yin is not satisfied. He continues to torment Braddock and his men until Braddock has been pushed to far. They revolt and the ass kicking begins. There is a great final battle which climaxes in a Mano-a-Mano fight between Braddock and Yin.

The film is well paced and is more about building tension rather than constant explosions, but enough happens for it to grab your attention until the end.

The acting is alright (for a Norris movie) and you really end up hating Colonel Yin; at times you are screaming at Braddock to just sign the form to ease their suffering. When Yin betrays them, although predictable you still scream, calling him all the bastards under the sun.

Admittedly it may not be the kind of film you want to watch again and again and it’s not the throwaway fluff that the first film was; the script in general does the job and there is the odd one-liner thrown in for good measure.

Overall, MIA 2 is a worthy prequel to the entertaining original and is definitely worth a watch.

When Colonel James Braddock is told that his Asian wife and 12-year-old son are still alive in Communist Vietnam, he mounts a one-man assault to free them. Armed with the latest high-tech firepower, Braddock fights his way into the heart of the country and ends up battling his way out with several dozen abused Amerasian children in tow! Struggling to keep them alive while outmaneuvering a sadistic Vietnamese officer, Braddock ignites the jungle in a blazing cross-country race for freedom.

This may arguably be my favourite of the MIA films. Chuck Norris gets to kick an unholy amount of ass and also gets to deliver one of the greatest lines in cinema history.

Braddock: “I don’t step on toes, I step on necks!”

The action set-pieces are superb with plenty of real explosions and fight scenes. What I enjoy about this series (aside from the action) are the stories; the plot is surprisingly interesting with Braddock trying to save his son from baddies who need their neck’s stood on. Chuck Norris displays the usual emotional resonance of a cucumber but you still like him… because he’s Chuck F***ing Norris. The supporting cast aren’t the greatest actors of all time, but really, are you looking for Shakespeare? Nope!

MIA 3 has the obilgatory “chick about to get raped but the hero comes in and kills said rapist in a violent way” scene which is always profoundly satisfying. Because he’s a rapist, he can be tortured for hours and no one will bat an eyelid.

The music score works well with the action and has that great 80’s sound to it. This may also be the best paced of all the MIA films with plenty of shoot-outs, martial arts and explosions for all the family.

Overall, Braddock: MIA 3 is extremely entertaining and arguably one of Chuck’s best films. Grab those beers, order the pizza, stick the dog in the washing machine and relax.