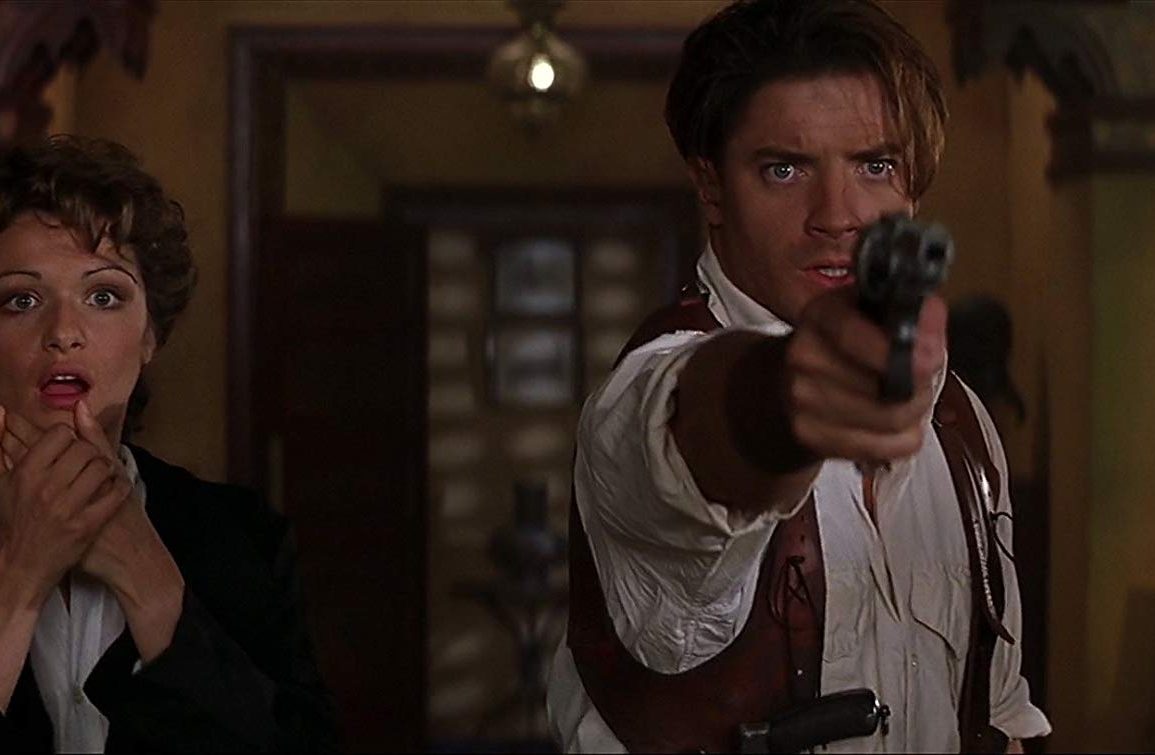 I recently picked up The Mummy trilogy on Blu-ray and hadn’t watched them for several years so I binged them over a weekend and thought I would do a write up on them.

Plot: At an archaeological dig in the ancient city of Hamunaptra, an American serving in the French Foreign Legion accidentally awakens a mummy who begins to wreck havoc as he searches for the reincarnation of his long-lost love.

Before The Mummy series Brendan Fraser was known more for playing goofy comedic characters in movies like California Man (or Encino Man as it’s called here) but when he played Rick O’Connell for the first time he evolved into a leading man with charisma and star power; he had great chemistry with Rachel Weisz on-screen and the pair make for one of my favourite movie duos.

The Mummy has the perfect tone of horror and humour but never straying too far into either keeping things light and breezy. It’s a movie I watch regularly as I adore these kinds of Indiana Jones style adventure yarns and the cast all seem to be having as much fun as we the audience.

At the time the visual effects were impressive and for the most part they still hold up with some nicely done CG and mind-blowing set-pieces. Arnold Vosloo was well cast as Imhotep who is The Mummy in question. His is a love story turned tragic but we never really empathize with him as he wasn’t exactly a nice guy even in life.

The supporting cast are mostly entertaining including Kevin J. O’Connor who plays Beni, a former friend and partner of Rick’s who betrays him frankly any chance he gets so he is just a weasel whose only goal is self-preservation. John Hannah’s cowardly Jonathan is my least favourite character as I hate cowards in general so he is a little annoying at times.

Jerry Goldsmith provides one of his greatest scores to date which is sweeping and epic sounding like Lawrence of Arabia and movies of that ilk.

There are some nice touches of humour and the pacing is tight keeping things exciting so it’s never dull for a second.

Overall, The Mummy is a bit of a classic with Brendan Fraser at his heroic best and a supporting cast who give their all; the visuals are still impressive only enhanced by Jerry Goldsmith’s amazing score.

Plot: The mummified body of Imhotep is shipped to a museum in London, where he once again wakes and begins his campaign of rage and terror.

The 1999 Mummy movie starring Brendan Fraser was a fun old-school adventure romp with every scene being stolen by Arnold Vosloo. He’s once again the highlight in this rather bloated sequel which is let down by arguably some of the worst CGI of all time… you know the scene I’m talking about.

This is a flaw in the majority of Stephen Sommers movies; his over-reliance on special effects but I do enjoy them as he tries to capture that old-school adventure vibe with a modern feel.

I like how rather than being the damsel in distress again, Rachel Weisz gets to kick some ass and has some impressive sword fights too. Her fight with Anck-Su-Namun in the flashbacks is well done.

There is plenty of action and the “My First Bus Ride” scene is a lot of fun; the opening battle scene with Dwayne “The Rock” Johnson was an entertaining introduction to the next action star… even if many of his movies since haven’t been the greatest.

The best thing about the movie (like the first one) is the score this time from Alan Silvestri which is pure epic adventure music at its very best with several memorable theme tunes.

Brendan Fraser’s Rick O’Connell character is straight out of a 50’s serial and manages to be suitably different from Indiana Jones; he’s a likable lead and this really has become Fraser’s iconic role.

The child Alex in it is pretty annoying but I’ve seen worse and he does have a few choice lines of dialogue.

I love how it’s like 10 years after the first movie and both Fraser and Weisz look exactly the same; they haven’t aged in 10 years?

The story is complete nonsense as you’d expect and there’s a bit too much going on; it’s like there are too many characters and John Hannah’s comic relief Jonathan still isn’t funny.

Oded Fehr returns as Ardeth Bay and has a bigger role this time; I love this character and would actually like to see a spin-off with him, never mind The Scorpion King.

Overall, The Mummy Returns is overloaded with average effects and a bloated story, but it’s still fun with an amazing music score and a classic villain in Arnold Vosloo.

Plot: In the Far East, Alex O’Connell, the son of famed mummy fighters Rick and Evy O’Connell, unearths the mummy of the first Emperor of Qin – a shape-shifting entity cursed by a witch centuries ago.

Although not as good as the 1999 Mummy movie, Tomb of the Dragon Emperor is still entertaining, mostly due to Jet Li’s turn as the villain. I’ve always found him to be a great bad guy and he’s clearly having a blast in the role. The movie is well paced with some fun adventure-style action and fantastic set-pieces.

Brendan Fraser returns as likable hero Rick O’Connell but alas Rachel Weisz does not and is replaced by Maria Bello who is okay in the role but just lacks the charisma that Weisz had. It also just plain ruins any continuity from the other two movies. The fact that their son has now magically grown older in the space of a few years also doesn’t quite gel but considering this is about mummies, then we’re not exactly looking for realism here. I liked that the kid from The Mummy Returns was replaced though so it feels almost like a passing of the torch.

The added bonus of Michelle Yeoh only helps matters as she can class up any movie and she has a decent sized role too.

All 3 Mummy movies have great music but the main theme to Tomb is a classic old-school adventure serial tune and it stays in my head for days after hearing it. It has become one of my favourite movie scores of recent times.

I liked how this entry changes things up giving us a new Mummy with different powers; it’s every bit as silly as the others and the finale where Jet Li turns into… whatever that is goes a bit far but it’s still harmless fun.

It was only when I watched the film recently that I remembered just how violent the opening scene was; it was pretty brutal considering the “family friendly” rating.

Overall, The Mummy: Tomb of the Dragon Emperor is arguably better than The Mummy Returns but the lack of Rachel Weisz is a distraction and she is definitely missed. There are some fun action scenes and Jet Li makes for a great antagonist but my favourite aspect will always be the music score.

So that’s my brief look back at the three Mummy movies with Brendan Fraser; Tom Cruise tried to do his version a couple of years ago but it just lacked the same magic as it was trying to hard to create a new Universe. If you love your old-fashioned adventure serials then you’re going to have a ball with these movies. Yes, there are flaws but they are a wonderful escape from reality which is what movies should be.