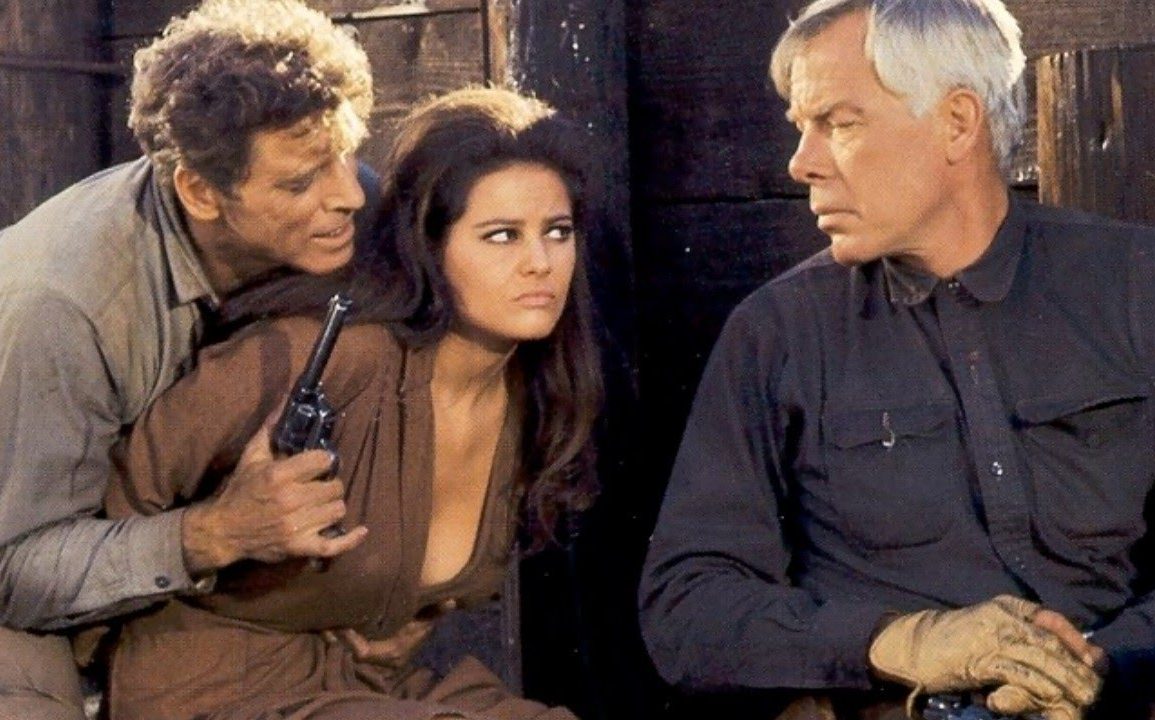 Plot: Four soldiers of fortune are hired by a wealthy rancher to rescue his beautiful young wife who has been kidnapped by a villainous Mexican bandit. When they finally find her, after fighting their way across deserts and mountains, they discover she is not being held against her will. This causes friction within the band as to whether they should honor their agreement.

Lee Marvin, Burt Lancaster, Claudia Cardinale, Woody Strode, Robert Ryan and Jack Palance star in this rousing men-on-a-mission tale set in the old West. It’s an unpredictable yarn with the cast at their best especially Lee Marvin who (as always) rarely smiles and generally just makes you feel like less of a man any time he is on screen.

Dolworth (Burt Lancaster) is essentially the conscience of the group of men who thinks something is off with the whole “rescue”; he’s charming and sympathetic but also happens to be an explosives expert. He gets to use his particular set of skills throughout providing some of the picture’s best action scenes. Lancaster wanted to do all his own stunts too which is impressive.

Fardan (Marvin) is the leader of the group and isn’t too concerned about Dolworth’s doubts at first because he gave his word that he would bring Grant’s wife back home and that’s exactly what he plans to do.

Each man has their own skill set but Dolworth and Fardan are the two who do the most but Jake (Woody Strode) is a complete badass with a bow and arrow so when the gang eventually get to Raza’s (Jack Palance) compound it has explosive results. This is the best action scene of the entire movie which is really more about the men dealing with their feelings on this supposed kidnapping; when they pick up Maria (Cardinale) she is reluctant to join them because she is actually in love with Raza and things aren’t quite what they seem.

Palance is playing a Mexican for some reason and you likely wouldn’t get away with it today but he was still great in the role and he was a wonderfully layered character.

The characters in general are more complex than you’d think at first and it isn’t exactly packed with action but I do love the movie because it’s unpredictable, has an air of cynicism to it, looks fantastic and the cast are never less than magnetic. The finale may disappoint if you are looking for a big shoot-out as this is all about the characters which is refreshing change.

Maurice Jarre provides the score which does the job but it’s not all that memorable and hardly a classic.

The script is sharp as a tack with lines like “Maybe there’s only one revolution, since the beginning, the good guys against the bad guys. Question is, who are the good guys?”

“Rico: So what else is on your mind besides hundred-proof women, ‘n’ ninety-proof whiskey, ‘n’ fourteen-carat gold?

As always IMDB has a few pieces of trivia and I thought this one was interesting: “According to Richard Brooks, Burt Lancaster and Lee Marvin did not get along during filming due to Marvin’s alcoholism, which was making him unreliable and difficult at the time, infuriating Lancaster. Brooks, who had directed Lancaster in Elmer Gantry (1960), felt the need to intervene because he feared Lancaster was going to “take Lee Marvin by the ass and throw him off that mountain”.”

Overall, The Professionals isn’t as action packed as some of the better known Westerns but the cast are fantastic and the story has a few surprises so it’s certainly worth checking out. It’s currently on Netflix and is the perfect escape from these tedious times.