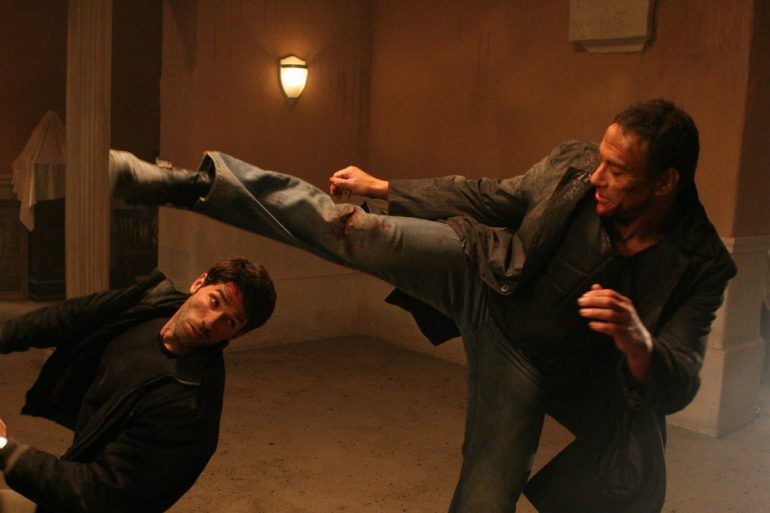 Plot: A Texas cop battles ex-navy seals who are trying to traffic drugs from Mexico into the USA.

This movie gets a lot of hate (even from Scott Adkins) but I actually enjoy it a lot. I liked the story and thought they tried something really different. Jean-Claude Van Damme gave a good performance but admittedly he does seem a little bored in places though.

The Shepherd does have the added bonus of JCVD vs. Scott Adkins at the end which remains an entertaining fight scene and easily the highlight of the movie.

Despite that though Adkins wasn’t too pleased with the final product; in an interview on a now dormant website (scottadkinsfans.co.uk) he was asked “are you happy with the end fight between you and Jean-Claude?

He responded: “That is the biggest disappointment, it had been choreographed ahead of time by JJ, it was huge. I was very excited and it had the makings of being one of the best fights of JC’s career, it would have lasted around 7 minutes. We wanted my character to be flashy and cocky with his legs in this one, a Tae Kwon Do guy. This is why I’m clocking JC with so many kicks at the beginning of the fight. Van Damme was going to figure me out and systematically take my legs away from me and end up breaking my back. It became clear that Jean-Claude didn’t like the style of fighting we had created and he ended up finishing the fight only a third of the way in and having him take me out rather quickly. There’s not a lot I can do about it but if I’m known for anything it’s exciting fight scenes, and I’m not used to doing a third of a fight and then throwing the towel in. Basically the fight is too short because Van Damme decided not to do it. I know he doesn’t like to do much fighting these days but he really had an opportunity to do something great with this fight. He’s one of my biggest inspirations and I respect him in many ways but I truly believe that if he’d listened to us and let us do our thing we would’ve had a much better movie. I don’t know why a martial arts star will do a film with Isaac Florentine and not want to do martial arts. The script was written as a fun action ride and we should have backed it up with decent fights but we were never given the chance.”

He then said “you would have thought that Jean-Claude was going to want to go all out in the fights, it was a perfect opportunity for him to combine his unquestionable talents with the rest of us and make an action movie we could all be proud of“.

He found working on the movie very disappointing and I can see why; it certainly could have done a few things better but like I said, I thought the story was good and the performances were pretty decent too.

It’s well paced, has plenty of action and Isaac Florentine sure knows how to direct fight scenes. Although never reaching the intensity of the Undisputed movies, they are still impressive, with Adkins on fine form.

I love watching Scott Adkins play the villain and he’s an interesting character in this as he’s a Navy Seal gone bad. It would have been more interesting to give his character a bit more depth and maybe make him more of a reluctant bad guy, but it’s still fun.

Overall, The Shepherd: Border Patrol is better than I remember and fans of JCVD and Adkins will really enjoy the entertaining final fight scene; it’s not a classic but it’s serviceable enough