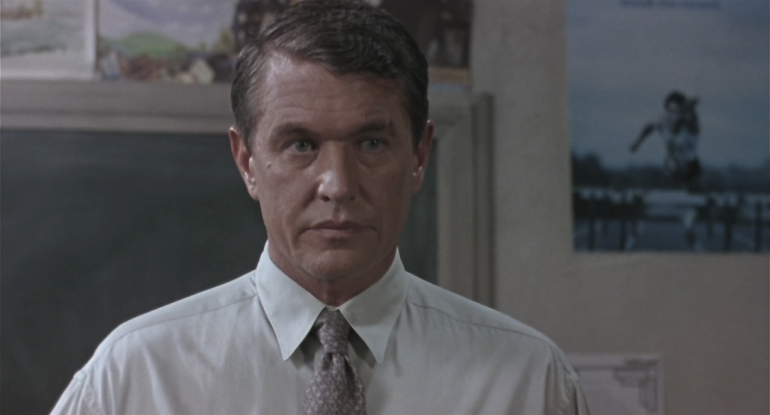 I only ever watched the first film in The Substitute series and it had been a few years since then; I thought now seemed like a good time to watch all of them and do a piece on the franchise.

So take out your textbooks and and turn to page one; school is now in session and remember no copying as there will be a test later…

Plot: Inner-city Miami schoolteacher Jane Hetzko (Diane Venora) gets her knee broken when she stands up to the school’s gang leader, Juan Lacas (Marc Anthony). Her boyfriend, mercenary combat specialist Jonathan Shale (Tom Berenger), goes undercover as a substitute teacher to take down the punk, but soon discovers that Lacas is merely an underling for the real criminal mastermind. Assembling the team from his last jungle raid, led by his right-hand man, Joey Six (Raymond Cruz), Shale declares war.

I always thought The Substitute could have been a spin-off from the Sniper series with Tom Berenger’s Beckett returning home to find out his local school has been over taken by drug dealers and criminals. As it happens it isn’t anything to do with Sniper and Tom Berenger plays Jonathan Shale, a mercenary who goes undercover at a school after his woman is attacked. Berenger always has a military bearing on screen so he is perfectly cast as the mercenary turned “teacher” Shale.

The first of 4 movies, this is the only one to star Berenger with Treat Williams taking over the sequels. The 90’s had other movies like this with the likes of Dangerous Minds where students from the wrong side of tracks are shown they can live a better life and that crime isn’t always the only option.

The Substitute is pure 90’s action movie greatness and although it may stretch credibility it is still an awesome action thriller with Berenger at his badass best and Marc Anthony suitably evil as the student from Hell Juan Lucas.

This is a minor spoiler too so if you haven’t seen the movie before then read no further.

It was refreshing to see Ernie Hudson play a rare villain as the corrupt high school principal as he’s always been one of my favourite underappreciated actors. The Substitute has a great supporting cast too including William Forsythe as Shale’s former team mate who may or may not be nuts. It’s a bit of a who’s who of 90’s action cinema as we have Raymond Cruz and Luis Guzmán who are part of Shale’s crew and when they all come together to take down the bad guys at the end it’s incredibly satisfying and genuinely explosive.

Diane Venora plays Shale’s girlfriend Jane and is a very appealing character; he is strong yet vulnerable and funny too coming across as one of the most believable characters.

It has an awesome 90’s hip hop soundtrack too including Guerilla Funk by Paris which was one of my jams growing up.

It isn’t short on action with Shale taking on Lucas and his goons throughout so we get fights and shoot-outs at regular intervals; a scene in the library is one of the stand out moments. My main question while viewing was are schools in America really like this? If so then they have a serious fucking problem but I imagine it’s taking a few liberties in terms of realism; my biggest threat in school was wondering if I had too much ketchup on my roll and sausage. Anyway, it still keeps the tension up and moves along at a good pace so you’re never bored for a second.

I was slightly disappointed that at no point do Shale or his men say “Class dismissed!” or “the PTA has disbanded, motherfucker” which feels like a missed opportunity.

Overall, The Substitute is classic 90’s action with Tom Berenger doing what he does best, plenty of tension, action and a satisfying finale. If you haven’t seen it then it’s time to register for class.

Plot: A mercenary with a chip on his shoulder, Karl Thomasson (Treat Williams) poses as a teacher at an inner-city school to exact revenge on the gang members who murdered his brother. As Thomasson investigates the killing and tries to keep his estranged niece, Anya (Susan Pratt), safe, he begins to realize how dysfunctional and violent the urban school environment has become. Even with support from fellow soldier Joey Six (Angel David), Thomasson is seriously outnumbered as he seeks vengeance.

So now we move on to the Treat Williams years and the second Substitute movie subtitled School’s Out which is practically the same story as the original but it lacks the swearing and violence (for the most part) of the first film. Where the first movie had an impressive cast the only recognizable faces in this one are Williams, Guru and BD Wong and it’s sadly inferior in every way.

I do like watching Treat Williams on screen but I find that he has too friendly a face to be a believable mercenary badass and he’s no substitute (ho ho) for Tom Berenger. I prefer him in the latter two movies though and his character becomes more interesting as it progresses.

Spoiler warning again so if you haven’t seen the movie then stop reading now.

BD Wong is one of my favourite actors and it was great to see him shine in Gotham as Hugo Strange but in The Substitute 2 we get to see him as another villain and he’s particularly nasty too; one scene has him beating up a woman interrogating her for information then shooting her in cold blood which was the toughest scene of the movie. He was one of the best things about it and he has a relatively satisfying fight with Williams for the finale. We also have Gangstarr rapper Guru (RIP) who is one of the main bad guys and was also pretty mean especially when he is beating a guy with a baseball bat.

This movie really lacks the exciting action scenes of the first entry and feels lower budget and sadly rather forgettable. We don’t really get to know any of the students as well this time around so we never really care what happens; if someone dies we then have to go to IMBD to see who the character was…

What this has in its favour is a shorter runtime (90 minutes) so it moves quickly and has a decent payoff at the end. Treat Williams is a sympathetic enough lead as he searches for his brother’s killer and tries to bond with his niece but it just lacks the same impact as the original movie.

Overall, The Substitute 2: School’s Out has its moments and a fun villain in BD Wong but it lacks the larger action scenes of the first entry and is unfortunately not all that memorable.

Plot: Mercenary Karl Thomasson (Treat Williams) comes to Long Island to pass along a medal to his dead friend’s daughter, college English teacher Nicole Stewart (Rebecca Staab). When Nicole is attacked by student football players who are afraid she might fail them, Karl acts as her substitute teacher to discover who was behind the beating. Investigating the campus, he learns that football coach Bill Braden (Scott Wilkinson) is giving his team steroids and will stop at nothing to achieve success.

The third entry in the series is easily Treat Williams’ best and real step up after the average second movie. This ups the nudity, swearing and violence quotient which as we all know makes for a better action flick. Williams has some good old fashioned one-liners too but once gain no one says “class dismissed!” What’s wrong with you people?!?!

This time Karl (Williams) goes undercover at a college after his friend’s daughter who is also a professor at the school is attacked. There are really only 2 scenes set in the classroom that feature Karl as the rest of the movie has him and his crew beating up and taking out local criminals and mobsters.

It’s really just an excuse for an anti-steroids message as three bullying jock assholes think because they play football the rules don’t apply to them due to their corrupt drug dealing coach.

The action in this one is pretty hard R with one scene having Karl sticking a knife through the bottom of someone’s chin and there is no shortage of fight scenes either. Karl is at his angriest in this movie and during the finale he repeatedly drives a car into the bad guy’s legs just to make sure he won’t be a problem in the future.

We are also introduced to Claudia Christian’s hard ass merc who has to pretend she’s an air head waitress in a bar as she tries to get more info on local criminal Tony who is attached to the mob. I used to have such a crush on Claudia in the 90’s especially when I first saw her in Arena. This movie also has a wet t-shirt contest in it which is another point in its favour.

Overall, The Substitute 3 remains Treat William’s best entry with a decent bodycount, regular fight scenes and good pace however, the 4th movie is also entertaining so let’s get into that now.

The Substitute: Failure Is Not an Option (2001)

Plot: In order to uncover a white supremacist group at a Southern military academy, former commando Karl Thomasson (Treat Williams) joins the faculty of the school. As Thomasson determines which cadets are involved in the racist organization, he falls for the beautiful Jenny (Angie Everhart), who also works at the academy. When Thomasson realizes that the school’s violent racist streak extends to its administration, the tough teacher is forced to take action.

So now we reach the end of the series and my biggest question remains is anyone even still reading this? Whatever, I’ll keep going…

You may think the fourth entry of a franchise may be terrible but this is actually pretty decent mostly because of the cast. Treat Williams returns for the last time as the amiable Karl Thomasson but now he faces off against the best villain of his trilogy with Patrick Kilpatrick (Death Warrant) playing a deranged neo Nazi at a military school who is polluting his students minds with hate.

Thomasson gets real pissed in one scene as he takes on one of his redneck students in class and frankly beats the shit out of him after he spouts some racist nonsense. Although released in 2001 the story is still very relevant in today’s climate which adds to the film’s tension.

It doesn’t have the budget or set-pieces of the third movie so it’s not quite as good but Kilpatrick never fails to play a convincing villain and is menacing as Hell any time he is on screen with that piercing gaze of his.

Angie Everheart also co-stars and her topless scene is good enough reason to tune in; we also have the underrated Bill Nunn (RIP) and Simon Rhee who also choreographed the fight scenes.

There is no shortage of action even if it is smaller in scale than previous entries and the final fight between Williams and Rhee is pretty satisfying.

Overall, I’m bored talking about this series now so I’ll just say if you enjoy the other Treat Williams entries then this is an adequate finale with Patrick Kilpatrick as the scene stealing villain and a few interesting fight scenes.

After watching all of the movies I would rank them as follows:

I think it would have been cool if we had a Substitute movie with both Berenger and Williams but sadly it was never meant to be. So I’ll just finish up by saying class dismissed… was that so hard?