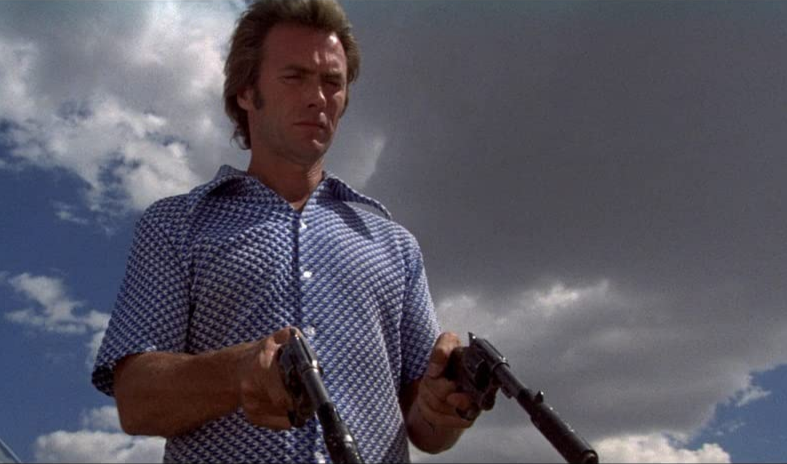 Plot: While stealing a car, free-spirited drifter Lightfoot (Jeff Bridges) crosses paths with legendary thief Thunderbolt (Clint Eastwood) in the midst of his own escape. Thunderbolt’s old partners in crime, Red (George Kennedy) and Eddie (Geoffrey Lewis), believe he double-crossed them after they robbed a Montana bank vault several years ago. After Thunderbolt successfully pleads his innocence and is let off the hook, Lightfoot rallies them together as a group to rob the very same bank again.

Michael Cimino’s directorial debut starred Clint Eastwood and Jeff Bridges and is the perfect example of 70’s nihilist cinema. The first half has this almost feverish pacing with Eastwood (John Doherty/Thunderbolt) and Bridges (Lightfoot) meeting with Thunderbolt being chased out of a church by a gunman and jumping into a newly stolen car driven by Lightfoot. The pair quickly bond and thus begins an Americana roadtrip with Thunderbolt and Lightfoot attempting to avoid Red (George Kennedy) and Eddie (Geoffrey Lewis) who still want revenge as they think Thunderbolt doubled crossed them years before.

The first 45 minutes move at a frenetic pace with Bridges giving Lightfoot a zany personality where he comes across as a free spirit who just might be a little crazy. He and Eastwood make for an engaging on-screen duo with plenty of banter in between the chases, shoot-outs and fist fights. It’s rather lighthearted for the first hour but the tone takes a darker turn when the pair team up with Red and Eddie to conduct a dangerous heist. Things slow down when all four of the men get “regular” jobs in order to scope out the location for the heist and it definitely does drag in parts.

It’s awesome to see a young Gary Busey (as Garey Busey) in it who only has a small part, but he still makes an impression.

George Kennedy gives a ferocious performance as Red; he is a bullying asshole who is just mean to everyone but the punch up between him and Eastwood is very satisfying and one of my favorite moments from the film. I always felt bad for poor Eddie who is generally good natured but just scared to upset Red so he goes along with him.

Seeing Bridges in drag never ceases to amuse and it’s him who steals the show and it’s understandable that he was nominated for a best Supporting Actor Oscar for it which is why to this day I’ve always hated the ending to this movie.

This is very much your 70’s cinema where we don’t get a happy ending; so Thunderbolt and Lightfoot both get away and find the old school house where Thunderbolt had hid the money years before. Then out of nowhere Lightfoot has a stroke and dies in the car; I think this is due to the beating he received from Red earlier on but it really leaves you with nothing. They get away with the money but at what cost? It’s a morality play and shows how there are consequences for your actions in life especially since Lightfoot pretended to be disabled in the opening scene. Due to this ending it’s not a film I watch that often as it’s rather depressing stuff but Bridges gives one of his best performances and Eastwood was always surprisingly good at comedy.

Overall, Thunderbolt and Lightfoot has an energetic first half with Jeff Bridges at his scene stealing best; Eastwood never disappoints either and he has the usual memorable one-liners too. There are a few action scenes that are well done but due to the depressing ending I don’t watch this too often.