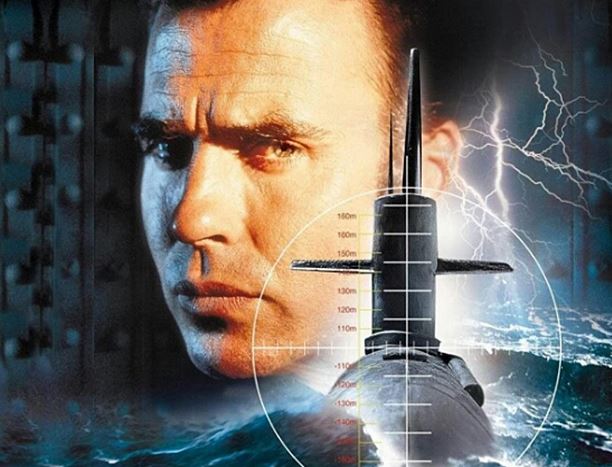 Plot: A US submarine runs into a time rift. A special unit goes on a mission to see what’s on the other side. They find themselves in an alternate dystopian America, now a one-man dictatorship. They decide to help the rebels.

Time Under Fire almost feels like several movies combined into one; it’s a submarine movie while also being a rather silly but enjoyable sci-fi actioner with a cast that includes Jeff Fahey, Bryan (calling himself Brian here) Cranston and Richard Tyson.

Jeff Fahey makes any movie better with his steely gaze and ice cool demeanor but he’s also someone that never phones in a performance no matter how ridiculous the material may be. In this he plays two roles including his grandson John who looks remarkably like Snake Plissken with his long hair and eye-patch. Then we have Bryan Cranston channeling Emperor Palpatine in the future scenes where he is wearing a Sith-style cloak and hood; he has been kept alive using cryogenic freezing and is now a dictator ruling America with an iron fist. Jeff Fahey’s submarine captain Alan finds a portal that takes him into the future where he and his crew team up with the local rebels to take down Palpa- err Braddock.

Cranston also plays it all with a straight face doing his best with what he’s given; I’m not quite sure what Richard Tyson was trying achieve here with his wooden delivery and bizarre accent but he’s certainly the weakest in terms of performances which is a shame as he is normally a decent antagonist.

There is an implied rape scene which was totally unnecessary and could have easily been removed as it’s very jarring and takes you out of an otherwise fun escapist tale.

Time Under Fire has a surprisingly awesome music score with a memorable theme tune which we don’t see much of nowadays. It’s too bad they had to lift some footage from Crimson Tide for the submarine battles but the rest of the action is nicely done with some fights, shoot-outs and explosions to keep things moving. At only 85 minutes this is a quick watch and doesn’t overstay its welcome; it’s so ridiculous though that some viewers may tune out but that’s really what I like about it.

Overall, Time Under Fire is silly but entertaining with a decent cast who do the best they can with such an odd tale; there are some impressive action scenes considering the movie doesn’t have a huge budget so it’s worth watching once at least.