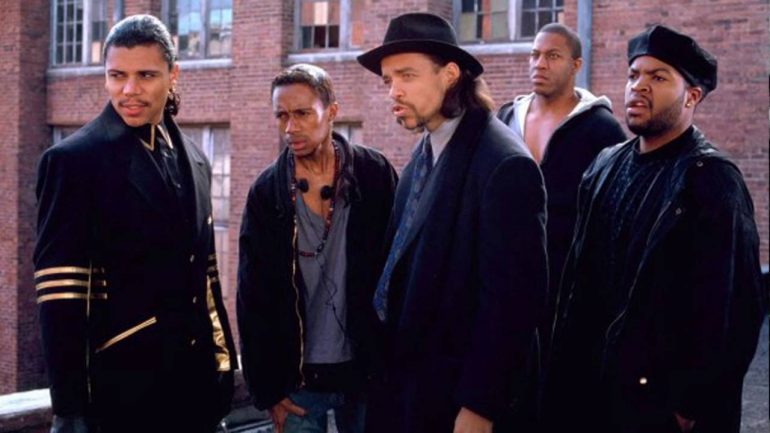 After the sad passing of Bill Paxton over the weekend I thought I would watch one of his lesser discussed movies (no, not Near Dark) called Trespass which co-stars William Sadler, Ice-T and Ice Cube.

Directed by the legendary Walter Hill, Trespass is seen as one of his inferior efforts but I have always loved it; I was a huge hip hop fan in my younger days especially Ice Cube and Ice-T so watching them face off on screen was a bit of a dream come true. It is essentially just an excuse for them to say “fuck” a lot while acting tough but I always thought they were pretty intimidating in this movie and Ice Cube in particular is volatile with pretty much anything setting him off.

Bill Paxton’s Vince goes along with his friend Don (William Sadler) really out of peer pressure as they pursue some potential riches in an old building in what they think is an abandoned part of town.

Instead, they stumble upon a gang related murder and they end up fighting for their lives as well as trying to leave with the stash of gold.

Don is really no better than the gang members who are pursuing them as he is driven purely by greed and even at the very end he would rather die than leave without his precious gold so you never really sympathize with him.

Trespass is really tense as the two sides have a battle of wits, with the gang members trying to find a way to take out the witnesses. We also have a powerplay with Ice Cube’s Savon wanting to take the crown as ruler of the streets from King James (Ice-T) so nobody can really be trusted, keeping things unpredictable.

The music is as awesome as you’d expect from a Walter Hill movie and is provided by the great Ry Cooder who provides some super cool twanging guitar and is one of the manliest music scores you’ll ever hear.

It’s extremely well paced with plenty of action and it all still holds up well. I remember before it was released it was initially called “Looters” but was changed due to the LA riots.

Apparently it’s also a very loose re-imagining of The Maltese Falcon… with more swearing and for the most part they succeed.

To this day Trespass remains a tense, action packed thriller with great music and a badass cast; if you haven’t seen it you should check it out as you’ll have more hairs on your chest by the end credits due to all the testosterone.