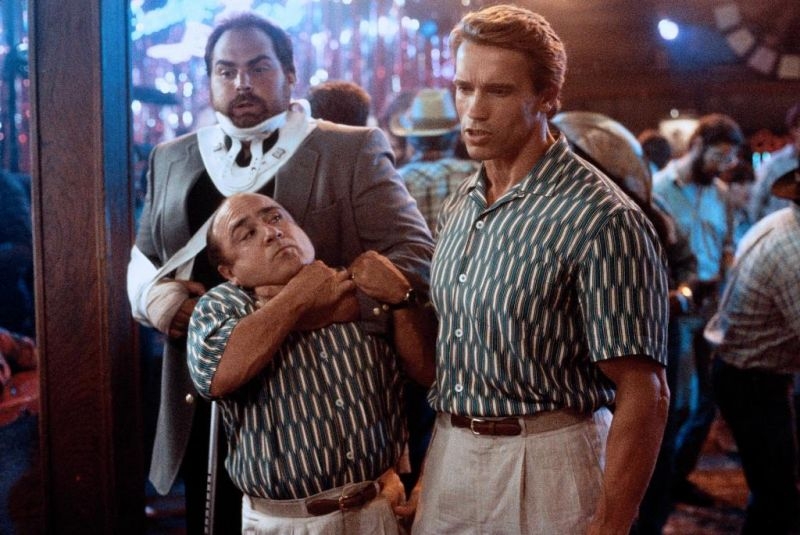 It had been many years since I have actually watched Twins starring Arnold Schwarzenegger and Danny DeVito so while recovering from a nasty bout of the flu I thought it was a good time to catch up on the action/comedy classic.

Twins for me is a movie that is pure joy to watch; you have Arnold as the loveable and good-natured Julius, a genetically perfect man who discovers he has a brother out there in the world so he decides to leave his perfect desert island and find him. Then you have his polar opposite Vincent played by Danny DeVito who has spent his life in and out of jail and getting into trouble and it really is one of my favourite roles of his.

After all these years Twins is still every bit as charming, heartwarming and funny as I remember but it also isn’t short of action with Arnie throwing goons around like rag dolls to protect his brother. I have to admit that the ending when their mum shows up had the room a little dusty and I teared up a little.

I think Julius is one of Arnie’s most sympathetic characters as he is just a giant with a heart of gold who just wants to bring his family together. Vincent has spent his life getting into trouble and the moment he is told he is basically made from the left over “crap” from Julius is frankly gut-wrenching and it’s this scene where we really root for Vincent who up until then has been all about himself.

I forgot David Caruso was in this as the garage attendant; it’s a small role but still fun to see him in an Arnie movie after he had been in First Blood with Sly.

Marshall Bell is well cast as the villain Webster and he would show up in another movie Total Recall as George / Kuato.

It’s well paced and there are some great one-liners with Arnie and Danny making for one of the most likeable duos of the 80’s.

Twins may not be packed with big set-pieces but the chemistry between Arnie and DeVito is the main appeal and there are some funny moments and surprisingly tender scenes making this arguably Arnold’s most successful comedy movie.