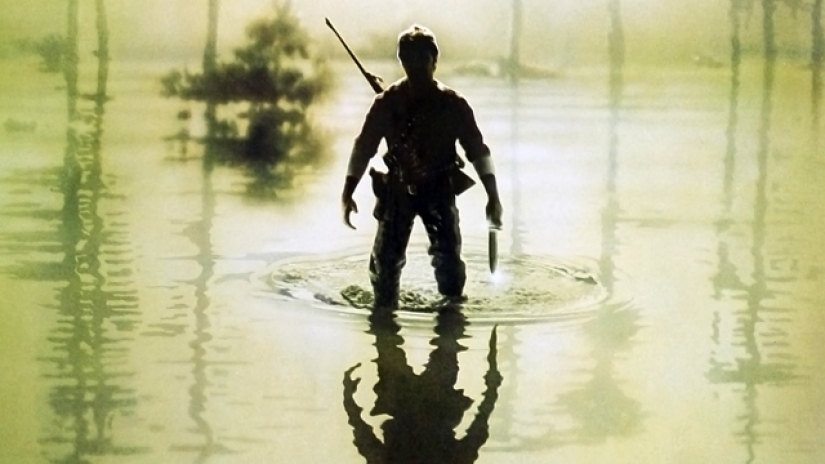 Plot: During the Vietnam War, a squad of National Guardsmen — including Hardin (Powers Boothe), a no-nonsense Texan; Reece (Fred Ward), a hunter; and Spencer (Keith Carradine), a sensible private — take part in a military training exercise in the swamps of Louisiana. After attempting to steal several canoes and firing blanks at a Cajun, the group members find themselves being hunted by the locals. Scared and unfamiliar with the territory, the men must scramble to escape.

Southern Comfort may well be one of the manliest movies ever made with Walter Hill proving himself arguably the manliest movie director of all time. I always thought he should direct an Expendables sequel as he understands the men on a mission genre perfectly.

Southern Comfort wastes no time in getting going introducing our ragtag group of National Guardsman who really don’t work well together, and you know they are going to fall apart at the seams when things go bad. It doesn’t take long for that to happen after the men get lost on a training exercise and piss off some Cajun locals.

Very few of the cast are actually likable characters and you can tell early on that pretty much only Powers Bothe and Keith Carradine will be the last men standing (nice other Walter Hill movie reference there). Although the enemy is hunting them this group of men will discover that their biggest issue is themselves as they struggle to perform as a team.

The incomparable Powers Boothe is essentially the lead alongside Carradine and these are the two characters we empathize with the most; we also have an excellent supporting cast that includes Fred Ward and Brion James.

It’s the type of movie we just wouldn’t get today as there are pretty much no women in the cast which you can’t get away with anymore. Modern audiences may struggle with some scenes which go on for a little longer than they maybe need to but I always found they are building up the tension as each of our Guardsmen are picked off one by one. The way the accordion music builds up during the climax makes you feel like you are there with the men and you can practically feel the desperation to survive jumping off the screen. The film takes place entirely in the bayou so it feels claustrophobic from the start immediately making you feel uncomfortable.

We get a little backstory for most of the characters but Hill never likes to give to much away and likes to let us find out little tidbits along the way. It’s been said many times that this movie is a metaphor for Vietnam but Hill to this day denies that.

Overall, Southern Comfort is a classic movie with Powers Boothe and Keith Carradine proving the most sympathetic in the ensemble; it’s packed with tension and memorable moments making it a must-see and one of Walter Hill’s best movies.