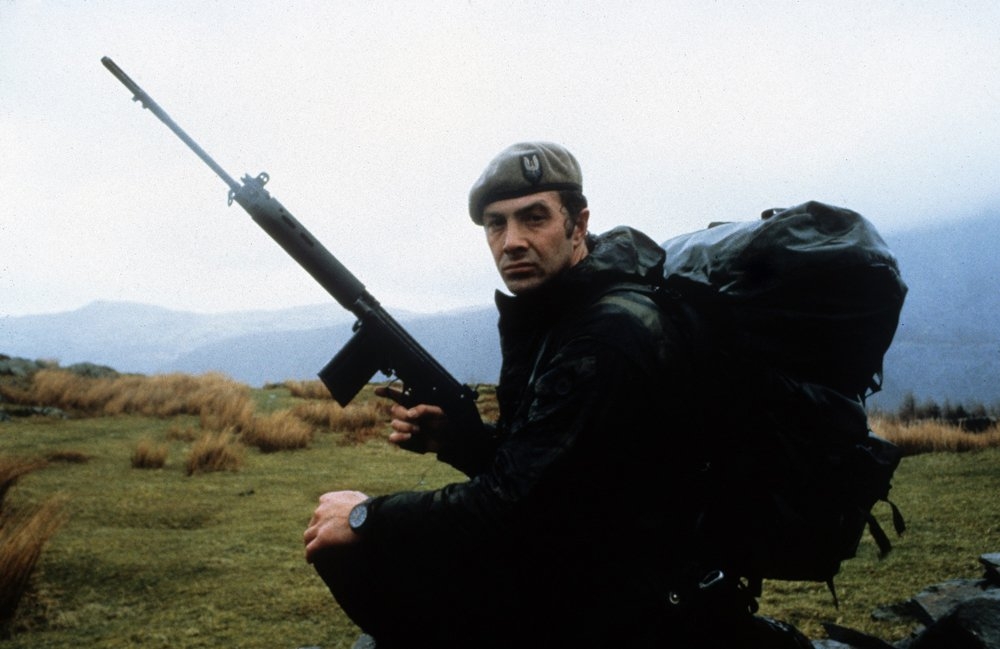 Plot: A trooper with the British Special Air Service (SAS) infiltrates a radical political group who are planning a terrorist operation against American dignitaries.

I always remember all of us chatting about Who Dares Wins in school as it was a staple of growing up in the U.K.; for international audiences it also went under the title of The Final Option but as Who Dares Wins is the motto of the elite S.A.S. (Special Air Service) then it makes more sense as a title.

It had been many years since I last watched it and although it is a product of the time period and sags a little in the mid-section it’s still a classic film. By the time it’s over I was ready to sign up for the S.A.S.; it almost feels like a recruitment video especially the finale which is every bit as thrilling as I remember.

The score is so heroic and badass that you’ll be cheering from your armchair as they take out terrorist trash.

Our protagonist Peter Skellen (Lewis Collins) is generally a flawed character who seems to have no problem cheating on his wife for the mission. We never know what he is thinking and he comes across as rather stoic but he is always engaging to watch on screen. After quitting the S.A.S. Skellen hooks up with Frankie Leith (a crazed Judy Davis) and he infiltrates her organization called The People’s Lobby who want world peace so they decide to take hostages and threaten to nuke Scotland. Because detonating a nuke is sure to bring peace… love your logic, Frankie.

Lewis Collins was a regular favourite to play James Bond back then and he would have been a solid choice; he had the charisma and charm but could also be ruthless when he needed to be.

Who Dares Wins digs into the politics of the time which I vaguely remembered but I was too young to understand everything that was going on; I understood it far better now needless to say. There were protests when the film was released as the peace lobby saw it as “right wing propaganda” which probably just generated more buzz for the film.

It has a great supporting cast that includes The Equalizer himself Edward Woodard, Ingrid Pitt, Kenneth Griffith (from The Wild Geese) and many more British legends.

It is almost filmed like a documentary, so every moment feels authentic with believable dialogue which sounds natural and never forced. The second half is arguably the stronger as it is bristling with tension and the climactic assault is totally gripping. When Frankie is debating with the US Secretary of State it’s nail-biting stuff and intelligently written. It never gets sentimental or overly emotional with the cast never failing to convince as hard as nails S.A.S soldiers.

I was reading on IMDB that when it came to shooting the climactic S.A.S. assault, the crew had prepared the helicopters and stuntmen but the S.A.S. offered to do the scene instead. Director Ian Sharp accepted as he thought the look they gave could not be replicated by the crew and he wasn’t wrong.

A sequel was planned where Skellen would lead an SAS team into the Falklands Island in a secret mission as part of the Falklands War but the movie never happened which is a shame as I would have liked to see Skellan get more action scenes. Collins said at the time that “initially I was going to do quite a lot of action, in terms of military action, but they decided to make the character undercover/plain clothes, so not a lot of the film depicts me as an actual soldier as such. So all the training I had to do, running around the Welsh hills, is all [kaput].”

Overall, Who Dares Wins remains a British classic with faultless performances from the entire cast and Judy Davis in one of her best roles as the trouble Frankie. The first half isn’t exactly action-packed but the finale more than makes up for it and how can you not love that theme tune?