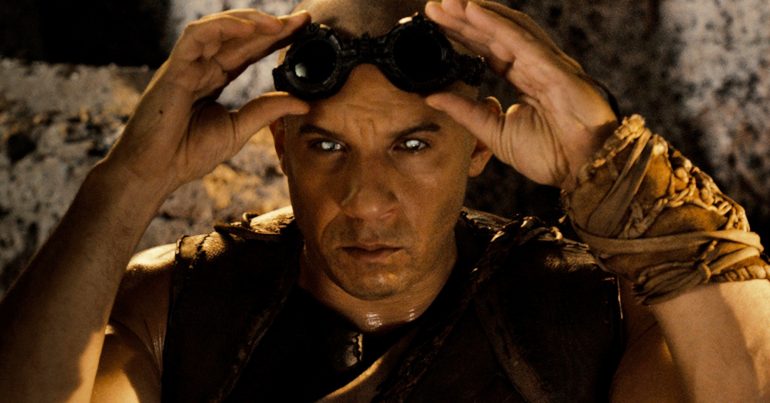 Riddick is an entertaining diversion for a few hours with some quality gore/action and an excellent soundtrack. Vin Diesel rocks in this role and I look forward to the next chapter. It’s just a shame about the slow pacing and average CGI.

Plot: Having been betrayed and left for dead on a sun-scorched planet, Riddick must fight for his survival against the deadly alien predators that exist in this barren land. After activating an emergency beacon Riddick soon finds himself battling teams of mercenaries from around the galaxy who are determined to bring him home as their bounty.

Review: Pitch Black is one of my favourite sci-fi movies and I even have a soft spot for Chronicles too. This movie is better than part 2 but not quite up there with the first movie. It takes a while to get going with far too much time spent on Riddick playing about with a lot of CGI creatures. He befriends an alien dog thing, which isn’t too bad looking effects-wise and the way it moved looked almost like motion capture from a real dog.

It does kill the pacing a bit and we get the point that Riddick is a survivor; it could have cut about 10 minutes from the movie which does feel a bit overlong in places.

The movie really kicks into gear once the bounty hunters arrive and they are quite the bunch of hard asses. We do also get the lovely Katee Sackhoff (naked) as a tough as nails bounty hunter who can really hold her own against all the guys.

Jordi Mollà is a hateful bastard and you are counting the seconds until he gets his comeuppance… which is the best scene of the movie.

Riddick is easily Vin Diesel’s best character and he’s just a complete bad ass in this movie. He’s the loveable rogue type of guy who you know can be ruthless, but he has a heart too.

The last 30 minutes is pretty much constant action and I found myself enjoying every minute. I love sci-fi as it’s such a great escape from reality and this movie really transported me for two hours.

I thought the story was well done and it wasn’t the total retread I was expecting of the first movie; it felt original and had some cool ideas too.

What I like about all three of these movies is the continuity; they reference each other and talk about characters/events from the other films so it all feels like one big story.

Graeme Revell returns providing the best score of the trilogy which really shines in the climactic speeder bike chase… which wasn’t ripped off from Star Wars at all.

Overall, Riddick is an entertaining diversion for a few hours with some quality gore/action and an excellent soundtrack. Vin Diesel rocks in this role and I look forward to the next chapter. It’s just a shame about the slow pacing and average CGI.