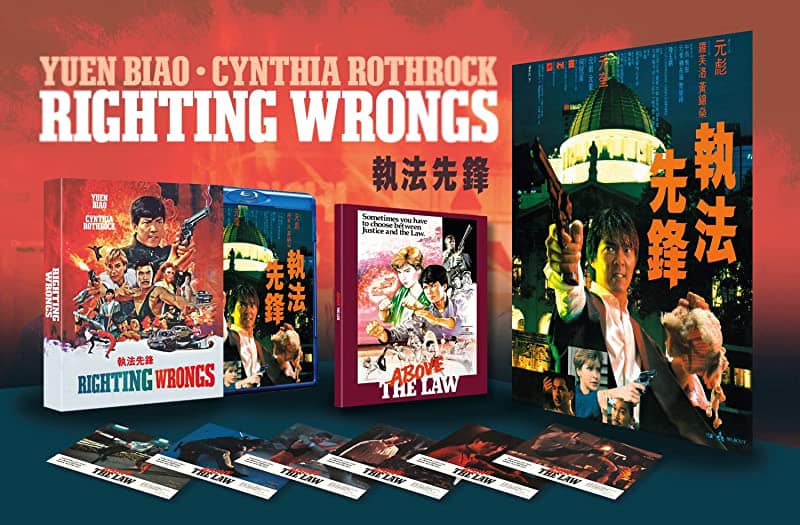 Righting Wrongs is arguably Cynthia Rothrock’s finest hour and Yuen Biao is mesmerizing in every fight scene making this essential viewing. 88 Films have done an exceptional job with this and it’s one of their best releases to date.

Plot: Lawyer Ha Ling-Ching (Yuen Biao), fed up with the failings of the justice system and the way it allows criminals off the hook, vows to take the law into his own hands after a key witness and his entire family are murdered. However, his plans are soon complicated when he finds hotshot detective Cindy Sze (Cynthia Rothrock) on his tail.

Review: 88 Films have been killing it lately with their Blu-ray releases; after picking up Drive, I also got the special edition of Righting Wrongs starring Yuen Biao and Cynthia Rothrock and this is another must-have for fans of Hong Kong action cinema. Righting Wrongs is one of Cynthia Rothrock’s best movies and she really gets to show off her martial arts prowess here and to this day I’m still shocked by how her story ends in this movie.

Yuen Biao is an exceptional martial artist and his character in this movie is intriguing as he is essentially a vigilante who kills a criminal in cold blood after he gets off and the justice system fails. So we have the moral quandary of whether he is doing the right thing or not which is what the film is all about. Cynthia Rothrock plays good cop Cindy Si who knows Ling-Cheng (Biao) is responsible for killing the crime boss and will stop at nothing to bring him to justice… but it’s not so simple.

There are twists and turns and the film makes for a tight 96 minutes with regular jaw dropping fight scenes and incredible stuntwork that all still looks great to this day.

The music score features epic electric guitars and it works perfectly with the frenetic action scenes.

The special features in this set are second to none –

There are almost too many special features and extras to go into here with fascinating interviews with Cynthia Rothrock and Yuen Biao discussing the making of the film. Cynthia mentions how she was supposed to be in Jackie Chan’s Armour of God but due to him being in an accident she signed on for this instead.

Overall, Righting Wrongs is action cinema at its best with wall to wall action, brutal beatdowns and a few shocking twists to keep things interesting. 88 Films have created a must-have collector’s edition here with a plethora of special features that will keep you entertained for hours.