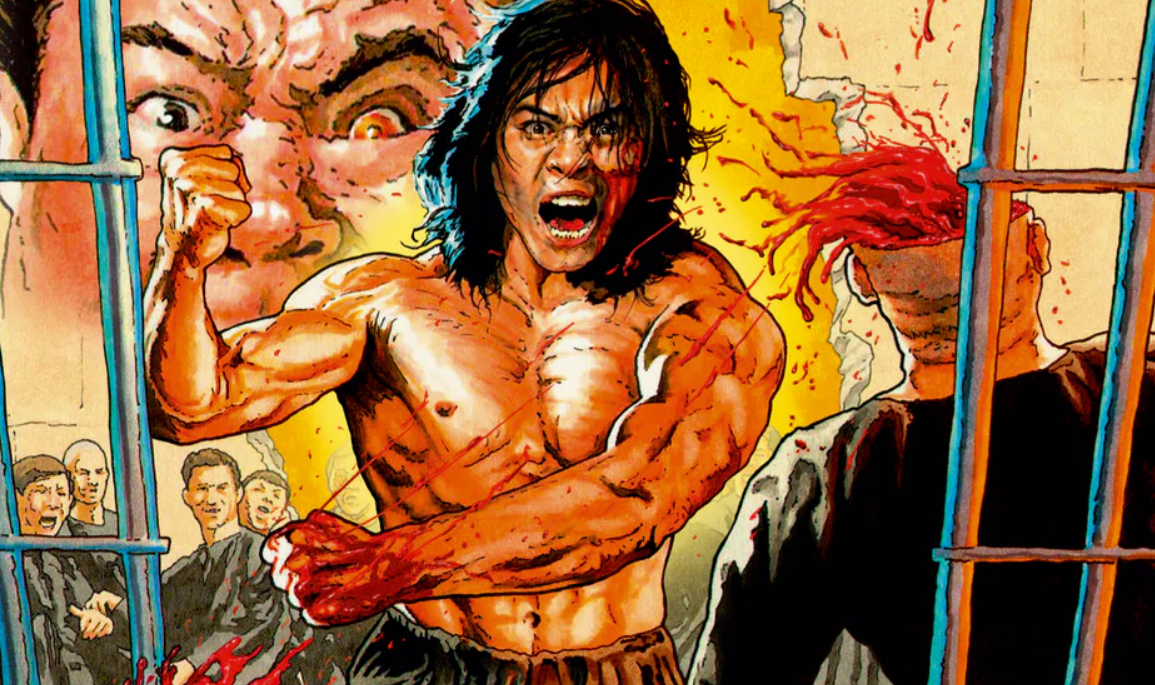 Riki-Oh: The Story of Ricky is one of the most insane action pictures you’ll ever see with hilariously gruesome (but not always convincing) practical effects, over the top characters and a badass but sympathetic lead in Louis Fan. 88 Films did a nice job here remastering the film so it looks and sounds better than ever and there are enough special features to keep you entertained.

Based on the Japanese Manga by Masahiko Takajo and Tetsuya Saruwatari, this cinematic adaptation also follows closely in the footsteps of a host brutal prison dramas like Brute Force (1947), Escape from Alcatraz (1979) and Scum (1979) but of course it’s all delivered with a distinctive Hong Kong style powerhouse punch.

Review: I was a little late to the party with Riki-Oh: The Story of Ricky as believe it or not I have never seen it before until I picked up the 88 Films Blu-ray of it last week. I’ve heard great things about it described as one of the most violent action movies of all time so obviously I needed to check it out. It certainly didn’t disappoint and Riki-Oh: The Story of Ricky is a masterpiece of bloodshed; admittedly some of the effects look very dated today and it’s more funny than disturbing but that’s really part of the entertainment factor. I love every minute of this movie as it’s really unlike anything I’d seen before taking place in a purely fantasy world where a prison warden can transform into a large, silly-looking monster version of himself by the end.

Louis Fan AKA Siu-wong Fan plays our invincible hero Ricky (or Lik Wong depending on which version you’re watching) who is incarcerated for manslaughter and assault but quickly proves himself one of the toughest prisoners alive. As a young man Ricky learned the art of Qigong which gives him superhuman strength so, any time he gets into a fight (which happens a lot) his opponents usually end up having holes punched through their bodies. Louis Fan makes Ricky sympathetic and we are always on his side as he battles corruption within the prison with some of the most memorable villains of the genre like Cyclops Dan and The Warden. They are all truly hateful so when they get their comeuppance you’ll be cheering from your seat.

The violence and gore in this movie is pure cartoon fun so, as I stated above it’s never especially shocking but it will have you laughing regularly just at the sheer imagination of the kills. It’s a rapidly paced 90 minutes of pure carnage with fight scenes and kills every few minutes so you’re never going to be bored.

88 Films released the film on Blu-ray a while back so I picked it up in the UK last week; the special features are listed below –

The one thing I found odd is that there is no Chapter Selection on the main menu which was annoying but aside from that the special features are entertaining especially the interview with Fan Sui-wong/Louis Fan who talks about learning martial arts from a young age under the stern tutelage of his father and then how he got into movies. The multiple audio commentaries don’t disappoint either especially Frank Djeng who is an expert of the genre. It’s well remastered too with crystal clear picture and audio; as I hadn’t seen the movie before I can’t comment on what the quality was like before but it looks great anyway.

Overall, Riki-Oh: The Story of Ricky is one of the craziest action pictures you’ll ever see with Louis Fan in a star making turn as the title character, regular fight scenes, memorable villains and hilariously over the top kills making it a bit of a classic. 88 Films did a nice job here with some entertaining special features although it is odd they forgot to put Chapter Selection on the Main Menu and I would have liked more behind the scenes footage. Either way, this is necessary for your collection.