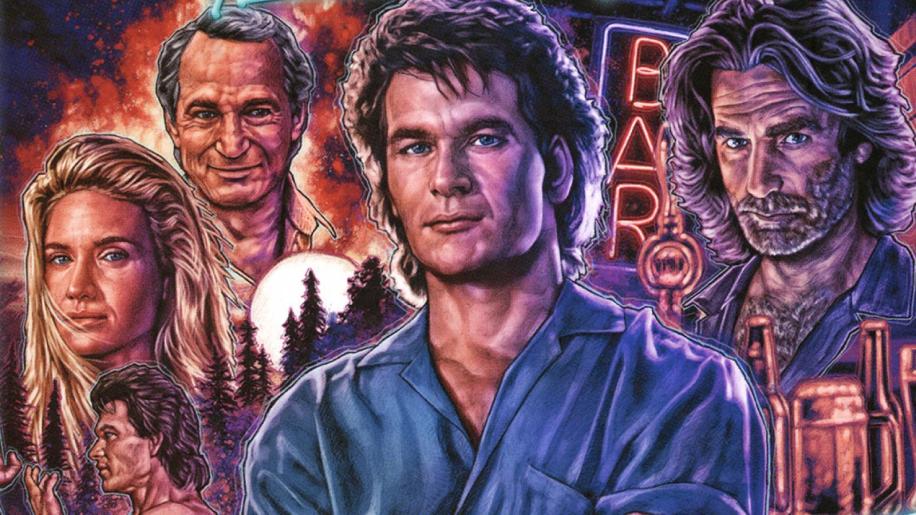 Road House is one of my favourite action pictures with Patrick Swayze at his iconic best as Dalton, several great villains (especially Marshall Teague), regular fights, explosions and nudity making it one of the best of the 80’s. Vinegar Syndrome really knocked it out of the park with this release as the film looks and sounds perfect and the special features will keep you entertained for hours. Essential!

Plot: James Dalton is a tough-as-nails bouncer with a reputation for using any and all force necessary to “keep the peace.” Meanwhile, Frank Tilghman, a country businessman, is having trouble maintaining control over the violent patrons and crooked staff at his newly acquired club, the Double Deuce. Upon learning of Dalton’s take-no-prisoners attitude toward security, he makes a proposal too good for Dalton to refuse; summoning him from The Big Apple to Jasper, MO and handing him the reins to the bar, on the promise that he clean the place up. But no sooner than his first few days in charge does he wind up stabbed and in the hospital. With the knowledge that he’s up against a gang of thugs who play even dirtier than he does, Dalton throws caution to the wind and prepares for a fight that will inevitably send someone six feet under…

Review: Vinegar Syndrome have rapidly become one of the best companies for releasing classic action movies on either Blu-ray or 4K and I knew as soon as I heard they were going to be releasing Road House on 4K it wouldn’t disappoint and it just might be the best release they’ve ever done (that I’ve got).

Road House remains one of the best action pictures of the 80’s and that’s just a stone-cold fact. Patrick Swayze is perfectly cast as Dalton, the bouncer with a philosophy degree who is asked to help out a bar known as the Double Deuce. When Dalton arrives in town it doesn‘t take long for him to find out that an evil businessman named Brad Wesley (Ben Gazzara) runs the show and that the two are going to have a showdown to bring him down once and for all.

As director Rowdy Herrington says in the interview on this disc, Road House is really a live action cartoon, and the characters (especially the villains) are essentially caricatures. Brad Wesley is one of the most underrated villains of the genre and Ben Gazzara is wonderfully smug and hateful every moment he is on screen.

All of his thugs are just there to get beat up by Dalton but we all know it’s Marshall Teague who steals the show as the henchman Jimmy. He has the best dialogue like “I used to fuck guys like you in prison” while having a final battle with Dalton… before getting his throat handed to him.

At an hour and 50 minutes Road House is perfectly paced with fight scenes every few minutes, regular explosions, and more nudity than 5 other action movies combined. It’s the kind of picture we sadly don’t see enough of anymore which is why we still talk about it today after all these years.

It wasn’t until I went through the special features on this that I discovered James Garner was the first choice to play Brad Wesley, but he wasn’t interested; as great as Garner was you’d be hard pushed to top Ben Gazzara who really made the role his own.

Sam Elliott immediately makes every movie better with his mere presence and he brings his easygoing cool to Dalton’s loyal friend Wade.

We’ve got a great choice in music too from Jeff Healey and every song feels like it belongs in this movie. Michael Kamen provides the score which sounds like Die Hard at times but admittedly it isn’t especially memorable.

Road House has never looked or sounded better with this 4K one of the best I’ve seen with flawless picture and audio. It’s packed with special features too –

The tribute to Patrick Swayze is a nice touch and the interview with Rowdy Herrington is very informative and entertaining; Joel Silver practically begged him to direct this but he was initially reluctant; thankfully he eventually changed his mind.

Overall, Road House is a classic of the genre and Vinegar Syndrome have done it proud giving it the best release I’ve ever seen, packed with special features which will take up many hours.