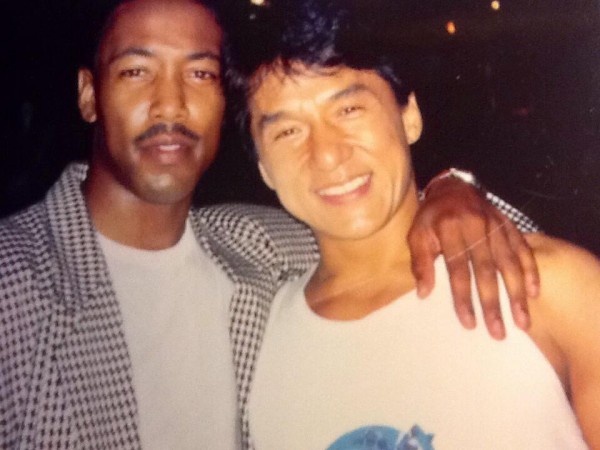 Bobby Samuels began his film career in 1990 . He became the first African American ever inducted into the Hong Kong Stuntman’s Association. Founder of the first Western Stunt-team in Hong Kong History. Has worked with and lived with mega -superstar Director/Producer Sammo Hung and has worked with Yuen Woo Ping “Matrix”among other prolific Directors and Producers. Bobby even became the first African American to go from action films in Hong Kong to dramatic films . Recently he was inducted into the ACTION MARTIAL ARTS HALL OF HONORS for exemplary contribution to the Martial Arts Film Industry.

We were lucky enough to chat with Mr. Samuels about his career and his future projects.

You’ll be joining us at the Urban Action Showcase and Expo in New York this November. It’s a great cause fighting for diversity in the action movie genre. Do you feel there is a lot more diversity in movies today than say the 70’s or 80’s? Is there still a long way to go?

Hello, yes I will be joining the Urban Action Showcase this NOV in New York.

I am excited to be a part of this history making event, highlighting diversity in the Action movie genre. Last year’s event was spectacular. However, this year is bigger and better!!!. Diversity for people of color has come a long way since the 70’s & 80’s in action films. There are a lot more opportunities than we had before in front of the camera as well as behind the scenes. Have we reached equality on all fronts? No however, events such as the Urban Action Showcase keeps these issues at the forefront of Hollywood.

In terms of movie franchises that are a good example of diversity, would you agree that the Fast & Furious series is one of them?

Absolutely; it’s funny how the first film was a success then 2 and 3 didn’t do so well, then when they expanded the cast it became more popular. The franchise has become bigger as it goes on, which is rare.

As one of the first African Americans to be embraced by Hong Kong cinema, you really had to prove your mettle in order to get properly into the industry. For those who don’t know can you tell us about that and do you think it would be easier for newcomers today?

What was it that made you want to go to Hong Kong rather than Hollywood?

When I was growing up most people were talking about Bruce Lee films. However, my first experience was seeing a Shaw Brothers film titled “King Boxer aka Five Fingers of Death; I was mesmerized by that film. I said to myself I have to work with these actors one day. How ironic that my first successful film was with Lo Lieh, the actor that starred in King Boxer.

What made me go to Hong Kong rather than Hollywood? Well every audition I went to, big time actors showed up. Wesley Snipes, Steve James, etc. I said the only way to get noticed was to create my own branding. So going to Hong Kong I knew there was no competition and I was the Only African American that spoke fluent Chinese. So, I was introduced to Sammo Hung and he became like a father to me. He signed me to his company and moved me into his home and the rest is history.

Which is more fulfilling for you as a martial artist, working as a stunt choreographer behind the scenes or acting on camera?

I have been fortunate to have started as an actor first, and then moved on to stunt coordinator and Action Director. I have been very passionate about every phase of my career. I enjoy the creative process and developing unique characters for film.

The American and Asian film markets have a yin and yang type relationship. American film’s stories are stronger; however Asia has action that is unparalleled in their films. With the recent diversity in American film franchises such as Fast and the Furious and the emergence of countries such as Jakarta and Thailand who now has a thriving Film Industry.

As you know, the Urban Action Showcase will be hosting the 30th anniversary of The Last Dragon; what does the film mean to you personally?

The Last Dragon was one the most popular martial arts film during the 80’s. I was mesmerized by Bruce Leroy the character brought to life by the charismatic and talented Taimak. I saw myself in him because I could identify with his love of martial arts and the greatest martial artist of all time Bruce Lee. This film was so powerful for people of color. It has endured for thirty plus years and continues to offer new generations a chance to experience the Glow lol!!!

I am so excited that the Urban Action Showcase has decided to let the world join in on one of the biggest reunions of all time.

You’ve been working on your directorial debut Beast; how is that coming along?

My directorial debut is a film titled “BEAST” and I will be sharing directing duties with my business partner and film director Kolani Davis who create the popular web series “LAST DAYS THE SAGA”. The script was written by Robert L Jefferson and the film is being produced by Michael Wehrhahn of Global Star Productions and Paul Cheng of Blue Phoenix Entertainment.

The story is about Marcus Walden who heads a multinational corporation that has developed a serum that would create the ultimate soldier. A serum known only as BEAST. The film is being led by an international cast and action designed by Hong Kong Action Director Tony Lueng . Don’t want to give away too much. I will say. Part action, part horror, all the way exciting: BEAST.

Can you tell us about your company Blue Phoenix Entertainment? And what other projects you’re working on?

Blue Phoenix Entertainment is a fully functional multimedia corporation that specializes in Co-Productions with Asia and original content for today’s Audiences We have a number of film projects in development along with original programming for cable and digital VOD as well. We have partnered with Global Star Productions and are about to premiere the Donnie Yen Box-office hit “The Monkey King” in U.S theaters this October. Soon after GSP will be releasing the IOS and PC based “Monkey King Game”. We are excited about the future!!

Thanks so much for taking the time to talk with The Action Elite and I look forward to meeting you in November.