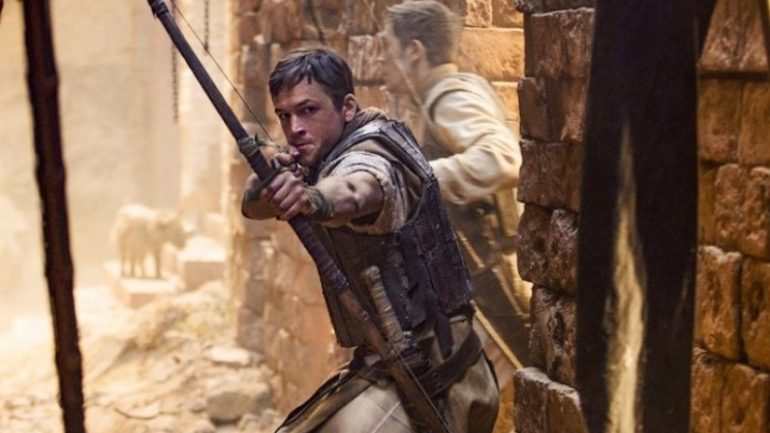 I went into Robin Hood expecting it to be bland and dull but was pleasantly surprised that it is packed with impressive action scenes and a cast who seem to be having a ball. It’s set up for a sequel which seems unlikely thanks to the disappointing box office but hopefully this movie eventually finds an audience.

Plot: Robin of Loxley (Taron Egerton) a war-hardened Crusader and his Moorish commander (Jamie Foxx) mount an audacious revolt against the corrupt English crown in a thrilling action-adventure packed with gritty battlefield exploits, mind-blowing fight choreography, and a timeless romance.

Review: I don’t think anyone was desperately waiting for yet another Robin Hood adaptation but here we are again and despite getting rather poor reviews and a disappointing opening box office weekend this new iteration is massively entertaining.

We start off with Robin meeting Marian (played by the stunning Eve Hewson) where they quickly fall in love but their blooming romance is cut short when Robin (or Rob as he’s known) is conscripted into the Crusades courtesy of the Sheriff of Nottingham (Ben Mendelsohn) and sent off to war. 4 years pass and Robin is disgraced and sent back to England where he plans his revenge against the Sheriff for what he has done.

In other Robin Hood movies we always hear about the Crusades but never really get a good look at what Robin did when he was there but in this new movie we do and it gives us a rather blistering opening sequence and it never lets up until the end credits.

Robin Hood is surprisingly action-packed with some impressive set-pieces throughout moving along with a jaunty pace. It’s beautifully shot and immensely stylish with an impressive cast.

It was nice to actually see someone who is British play Robin and Taron Egerton makes him a cross between James Bond, The Green Arrow and Batman. I find Egerton has a natural amiability and he’s an appealing character to watch on screen so he makes this role his own despite the numerous actors who have portrayed Robin Hood previously.

Eve Hewson brings her Irish charm to Lady Marian making her desirable but strong; Ben Mendelsohn is one of my favourite actors working today and he does the best with what he’s given but the Sheriff really isn’t all that interesting a character and I doubt anyone will ever hold a candle to Alan Rickman’s sneering turn from Prince of Thieves.

Jamie Foxx gives one of his best performances to date as the Moorish Commander “Little John” and for once I could understand everything he says; normally he mutters as I’ve said before but he makes John sympathetic yet badass and we are 100% rooting for him.

The score was fantastic as well with some incredible percussion and heroic cues giving us one of the most thrilling Robin Hood movies to date. Nobody told me there would an epic training montage in this film which automatically gives it an extra half star as it was a welcome shot of adrenaline.

The biggest fault with the movie is the script; there are some clunky lines of dialogue but it also blatantly steals from Batman Begins at several points. “Robin of Locksley is your mask” Marian says to Robin at which as we all know is very similar to what Rachel says to Bruce Wayne at the end of Batman Begins. Then at one point John is captured and the Sheriff says his son “begged for his life” which also reminded me of the scene between Bruce Wayne and Carmine Falcone so clearly the writers are big fans of Christopher Nolan.

I find it quite funny how some reviews are moaning that the film isn’t historically accurate… it’s fiction. Robin Hood has always been a myth and despite scholars claiming that someone similar lived in the 12th or 13th century it’s not like anyone actually knew the guy personally. I have no problem with the filmmakers taking liberties and going for a more fantastical route as it isn’t detrimental to the entrainment value of the picture and that is after all the point of movies.

Overall, Robin Hood was far more entertaining than I was expecting with several impressive action sequences and a cast who give their all making this one of the underrated gems of the year.