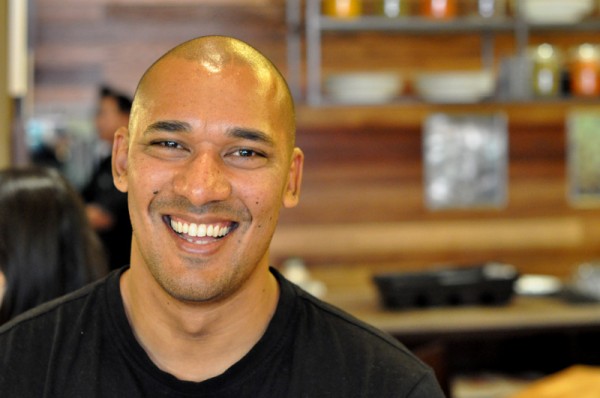 Rody Claude is an actor, editor and director who has worked on Knowing (2009), The Matrix sequels, Deadtime (2013) and his most recent picture Zombie Ninjas vs. Black Ops which he directed.

They soon face off with the covert response mission deployed to fight back. This elite black ops team underestimates the brutality of their encounter, which ultimately tests their loyalty and friendship, resulting in a frightful assault between these two highly skilled lethal forces and DILLON thrust in the middle fighting for survival.

Rody stopped by The Action Elite to talk about the movie and what he’s working on next.

How did the concept of Zombie Ninjas vs Black Ops Come about and how did you get involved?

It was actually an idea I had which came about based on a what I thought would be a cool movie title, SWAT vs Ninja. Initially, it sounded like a movie I’d love to see, but after playing around with it for a while I realised it could be even more exciting with a monster element. That monster-alien element would be the zombie-like ninja creature, making the ninjas even more scary, powerful and harder to kill.

What made you want to direct?

It felt very natural to me, I loved the idea and was excited to explore these new deadly creatures on screen. Not to mention the opportunity to play with so many fight scenes and challenging the characters as they go up against each other in an all-out one night of survival.

I loved the noise the zombie ninjas made; tell us how you came up with that?

Because these zombie ninjas haven’t existed before, it was fun to have a ‘clean slate’ to develop their sound. I wanted something creepy and ominous, and other-worldly. So the process was pretty much listening to a lot of monster noises, animal noises and zombie effects to find ones I liked, then it was all about mixing a bunch of noises until we achieved the final result.

One of the aspects I enjoyed was the tone of the movie; frankly I hate when movies try to be overly ironic and funny but this didn’t. It was intense and exciting; was that important to not play it for laughs?

I’m glad you enjoyed that. It felt kind of expected to go down that ironic path. But I wanted to take this world a bit more seriously. So, yes, I went into this film trying to make it as intense as we could with what we had. The intention was to make it feel fast, exciting and more realistic, despite the supernatural elements lol.

Adam T Perkins has “action star” written all over him; what made him the right choice for Dillon?

Yes, he does! He’s got a tonne of presence. He did a great job in the audition and nailed the American accent and the sensitivity balance of Dillon being a likeable tough guy. Also he had a great look for the part. You kinda just know when that right person walks in for the role and realise he’d be perfect as Dillon. Everything felt right with him.

Were there any influences behind it?

Yes!!! Action movies like The Bourne Ultimatum and Legacy, I Am Legend, and of course Die Hard were amongst many sources of inspiration.

Talk us through putting together the fight scenes; they were really nicely done.

Thanks. Like I said before the Bourne films were a great inspiration, in particular their fight scenes. I like the intensity and realism in those fight scenes so we tried to bring that idea into planning our fights. I really like the short bursts of energy in each one of them, and that they are not obviously choreographed which keeps them feeling more realistic, to me. It was important to see what the actors would bring to the fight scenes and to see what they were comfortable doing. Then we’d play around with the choreography to see what clicked. We’d block through a few times and then shoot multiple angles for the edits. I broke each fight scene down into 4 or 5 sequences to keep it more manageable and to keep the actors from being too exhausted. The fight scene at the end with Dillon and the sword wielding Zombie Ninja was inspired by western style duels and Bruce Lee movies. I enjoyed working on that fight scene a lot because of the whole gun vs sword thing, it was a heap of fun to play with that concept.

How did Soa Palelei come on board?

Soa responded to an open casting call, the first time I met him was at the audition. Despite his UFC persona he’s really a nice guy, we got along well, which helps when your trying to make a film. Watching him at the audition, I just knew he’d be great. He moved fast and agile for a big guy and looked intimidating and ferocious. He is a pretty passionate kind of person who puts everything into it whatever he’s doing, I love that kind of dedication.

It’s left open for a sequel; are there plans for a follow up? Is there a script ready to go?

Yes, we have grander plans for the Zombie Ninja world… but only time will tell, I know where I’d like to take it – budget permitting, but no locked down script just yet…but maybe in the near future. In the meantime, the Zombie Ninjas world will expand in the animated Zombie Ninjas comic web series.

What other projects are you currently working on?

The Dawn of Knight is an action feature film currently being developed. It’s a story about a man becoming an assassin. Amongst some others, our company is also developing a drama fantasy feature film in the coming months.

Thanks so much for chatting with The Action Elite and all the best with your future projects.

Thanks for your interest in our movie, and for the ongoing support you give action movies and independent filmmakers!