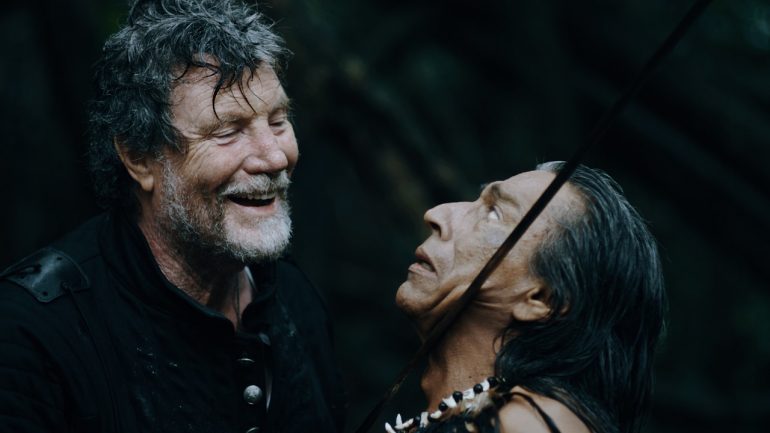 Ronald A.Blum is the writer, producer and executive producer of “The City of Gold”, a Saturday Matinee-style throwback that stars Vernon Wells and Christopher Atkins and combines all the successful elements of the classic adventure flicks – snarling villains, dashing heroes, lavish locations, well-choreographed biffo and an emphasis on story over style. The film hits DVD and VOD in December.

Does it feel like that film’s release has been coming a long time? Tell us when this journey started for you, sir….

It has been a very long journey—more than twenty years.   I wrote the original version of the script over two decades ago, when I was still a graduate student in Biophysics at UC Berkeley.  I always felt it would make an entertaining film and held onto it all these years with the idea that someday, if the circumstances were ever right, that it would be an awesome project to produce on my own.   My wife always joked that all I talked about for the past 20 years was producing the movie—she’s probably right!

Producing the film has been a very exciting but much bigger endeavour than I ever imagined.  It’s easy to get caught up in the creative elements, because that’s the incredibly fun and intoxicating part, but first and foremost, it is a business, with an unbelievable amount of paperwork, attention to detail and responsibility.  But in the end, it is a fantastic feeling to actually have your film come to life and be available for people to  see. Do you remember the day the film was financed, the cast was locked, and all the ducks were in place? I imagine that’s a special day for a filmmaker?

I remember the first day of principal photography.  We were shooting on top of Lona Ridge, a gorgeous mountainous peninsula overlooking the ocean on Maui, HI.  Trucks, camera equipment and crew were everywhere—it became a much bigger production than I had ever envisioned.  When we were all set for that very first take and the DP said “speeding” and the director said “action!”, that’s when it hits you that it’s really happening and it is an unbelievably exciting and scary feeling, because now you are committed and everyone is counting on you to deliver on what a few short months before were just words on a page.

Was the script inspired by anything – or a specific idea?

I’ve always been fascinated with the supernatural and the idea that there are things in this world that we normally can’t see or hear, but are still very much real.  Many cultures around the world believe that contact with the spirit world is not only possible, but an integral part of their society.  The idea of shamanism, and being able to bridge the spirit world with our own current reality, was the idea that sparked the story behind “City of Gold”.

How fast did the story come to you?

Elements of the story came very quickly, but like any screenplay, it is an iterative process that constantly evolves, and needs to in order to adapt to changing circumstances that arise due to budget, time constraints, locations and a host of other factors.  That’s what makes it challenging and exciting.

And which era of films would you say influenced your libretto mostly? Dare I say, the ‘40s classics?

I grew up loving the classic adventure jungle films like “African Queen”.  They had such great characters that drew you in—you really were invested in them.  I think the fact that you didn’t have all the technology that is available now for visual effects meant that you had to have storylines and characters that grabbed you and kept your attention.

With that said, I do love the modern adventure films like “Raiders of the Lost Ark” and “Lord of the Rings”—they not only have great characters and storylines, but spectacular visual effects that allow supernatural elements to come to life in a way never seen before. How much did the script change between draft and day 1 of the shoot?

A lot!  It’s interesting to look back at the progression of a script to see how it evolves.  I generally like to start off with a concept and run with it, unencumbered by constraints of production, to see what I can create and just have fun.   But as you begin to lock down a script for production, you have to rework it to reflect the practical constraints of everything from budget and locations to insurance, permits, casting, and a myriad of other factors.  It can be challenging, but that is part of the fun—to see how creative you can get in putting something together that will satisfy all the parameters and still be entertaining.

Was Vernon Wells an improviser?

Working with Vernon was incredible—he is the consummate professional actor.  He delivered every line perfectly and every take was amazing.   Vernon can also improvise, and is a master of quickly adapting to changing circumstances.  As an example, on the last day of shooting, we had three hours before he had to catch a flight.  We were all set up to shoot a scene at the lagoon when it started to rain.  Vernon was dressed in armour, and clearly uncomfortable as it started to pour, but instead of complaining, he embraced the elements, looked up to the sky, opened his mouth and let the water fall onto his tongue, as if absorbing a gift from the gods.   It made the scene come alive.

And can you tell us where the film shot? Seeing a couple of Australians in the cast, I wondered whether some of it might have been shot there?

No, we didn’t shoot in Australia, although I would love to film there someday—we actually shot most of the film on Maui, HI.   Maui offers some spectacular scenery that is perfect for a wide variety of settings.  The jungle shots were filmed at “Twin Falls” off the road to Hana.  The tropical jungle and waterfalls there were breathtaking.  It was a great experience shooting in Maui—the Mayor and Film Commissioner were amazing in helping to accommodate our needs and really went the extra mile to be film friendly.

The film is a fun film but do you also think there’s a message in it?

I don’t like to get too philosophical, but I believe there is more to the physical world than we can normally see.  I like to think that the way we treat people has consequences, whether it is apparent or not and that there are forces out there beyond what we can understand or comprehend that can influence our lives.  Sometimes we get a rare glimpse into that world, and that makes things just a bit more exciting.

The film is, unlike so many films, getting an actual physical DVD release. How important was it that you got a disc as well as a VOD release?

I’m very excited about it.   So much of what we experience today is all digital with no real physical manifestation.   I think people really enjoy having a tangible version of art, whether it be music, a painting, a photograph, a book or even a film.  There is a unique quality of permanence and satisfaction to having entertainment in a physical form which is why I think vinyl has made such a comeback.