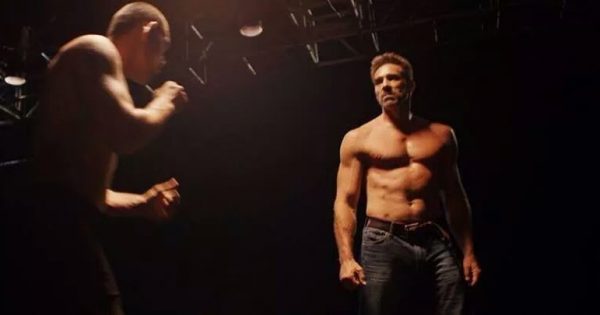 Rumble may not reinvent the wheel but it has plenty of scenes featuring Gary Daniels punching people in the face which let’s face it, is what we want to see.

Plot: Rumble revolves around an aging and injured former MMA champ (Gary Daniels) who is forced back into a deadly Mexican underground fight circuit to save is girlfriend (Sissi Fleitas) who is kidnapped by a mysterious cartel leader and criminal mastermind.

Review: Just a few weeks back I was wondering if this movie would ever get an official North American release; it appears the movies gods were listening and decided to release it on Netflix so I finally gave it a watch over the weekend.

I really enjoy director R. Ellis Frazier’s pictures; they are usually set in or around Mexico with some nice cinematography and some gritty action. Frazier has previously worked with action star Gary Daniels on other projects like Misfire and Across the Line: The Exodus of Charlie Wright. I think Rumble may be my favourite collaboration yet with its down and dirty fight scenes that make every punch and kick look brutal.

This is the kind of role Daniels was born to play; he’s a fighter who is broken and nearing the end of his career. He’s got a damaged knee and what’s worse; he and his girlfriend Eva are on the run from her former pimp after she killed someone. The same thing happened to me just a few weeks back, weird!

Eva ends up getting kidnapped by a mysterious stranger and forces Goran to fight for him… or Eva dies. So the story is pretty much business as usual for this type of movie but there are a few surprises (although most you can see from a mile off) in the story and I’m not sure how I feel about that ending yet…

It would make a good double bill with Daniel Zirilli’s Crossing Point which had a similar story and was also set on the border of Mexico.

A lot of the acting is pretty rotten and the dialogue is forgettable but the action keeps things moving along well. This has a grainier look than Frazier’s other pictures which gives it an extra edge so it’s not quite as pretty looking but works in establishing the atmosphere.

The fight scenes are pleasingly violent with Daniels proving he can still move with the best of them.

Overall, Rumble may not reinvent the wheel but it has plenty of scenes featuring Gary Daniels punching people in the face which let’s face it, is what we want to see. It’s a perfect switching your brain off on a Saturday night movie and delivers the goods, despite some dodgy acting from some of the supporting cast.