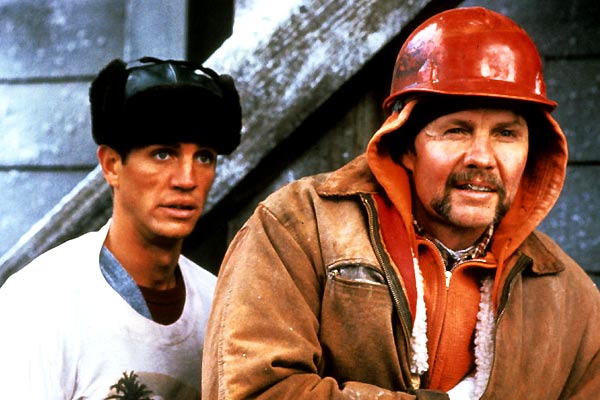 Review: Runaway Train is widely regarded as one of Cannon films best pictures and I’d have to agree; it’s unconventional characters, excellent performances  and spectacular stunt work make it stand up well even after 30 years.

John Voight gives one of his best performances as fierce convict Manny; his don’t give a shit attitude comes as surprise considering he’s meant to be our protagonist but this is not a nice guy nor someone you’re exactly cheering for and yet Voight still manages to make you care.

Eric Roberts plays the more simple Buck McGeehy who essentially comes along for the ride but his straightforward outlook of the world gives the film its heart and shows that Roberts is much better than the hammy villains he plays far too often these days.

We also get a young Rebecca De Mornay who is stuck on the train with the two convicts; I’ve always liked her as an actress and she’s incredibly sympathetic in this.

John P. Ryan was always watchable and he plays the warden Ranken who is a pretty nasty piece of work and has it in for Manny.

The action is incredibly well done and music score really adds to the excitement; the choral music at the end gives us a surprisingly moving finale.

I’m going into spoiler territory here so if you haven’t watched the movie then you’d best look away now.

The only thing which annoys me is the ending; does Eric Roberts escape or does he go back to jail? We never really get any closure on that which really bugged me and left it open for interpretation.