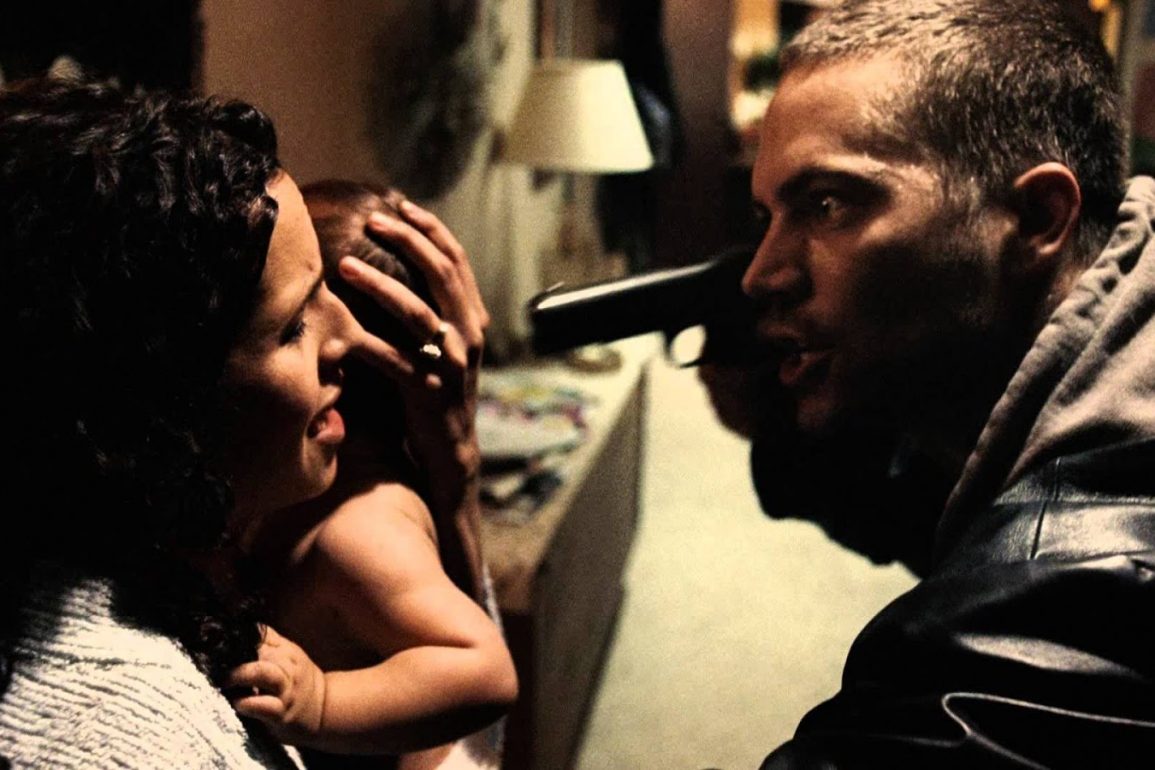 Running Scared is a pretty intense movie with great performances, but it’s let down by a jarring mid-section with the pedophile couple and a lack of likable characters. It’s worth watching though for some nice stylistic touches and lots of bloodshed.

Plot: After a drug-op gone bad, Joey Gazelle is put in charge of disposing of a gun that shot a dirty cop. But things goes wrong for Joey after the neighbor kid stole the gun and used it to shoot his abusive father. Now Joey has to find the kid and the gun before the police and the mob find them first.

Review: I’d never watched this before until last week; everyone had been saying what a great movie it was. I would agree that it’s entertaining and has a few stand-out moments, but it’s hardly a classic.

My main gripe with this movie is the tone; it starts off like a violent gangster-style movie and gets pretty tense in places, then it totally lost me when the pedophile couple came into the story. It was unbelievably creepy and added nothing it. It just jarred with me and felt like it belonged in another movie; at least the scene had a satisfying outcome though…

My other problem was the sheer lack of likable characters; Paul Walker spends most of the movie shouting and swearing at children. It’s not until the blood-soaked finale that we find out who he really is and makes a bit more sense.

The movie in general is quite surreal in places and has some really nice directorial flourishes; it’s very stylish and Wayne Kramer gets major props for trying something very different. It’s pretty brutal in places with a pretty huge bodycount too, so it’s not family viewing.

Despite Walker’s character Joey not being all that sympathetic, he’s probably more realistic and believable. This is arguably his best role in terms of acting and he is utterly desperate and panicking from beginning to end.

Cameron Bright has to win the award for least annoying kid in a movie, ever. He plays Oleg, a child who has been brutalized by his father and starts this whole nightmare off. He is a very restrained actor and gives an excellent performance; you so want him to have a happy ending… which thankfully he gets.

Johnny Messner is scary as Hell as Tommy and he totally doesn’t trust Joey (Walker); when he stares at him you are just waiting for something awful to happen.

It was cool to see John Noble (LOTR, Fringe) as a Russian crime boss and as usual he was scary too… actually pretty much everybody is scary in this movie.

Overall, Running Scared is a pretty intense movie with great performances, but it’s let down by a jarring mid-section with the pedophile couple and a lack of likable characters. It’s worth watching though for some nice stylistic touches and lots of bloodshed.