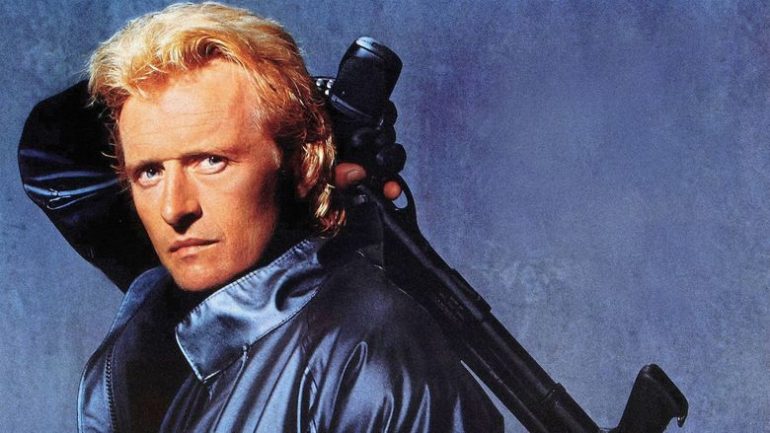 I’ve definitely been going through a Rutger Hauer phase recently; after doing a piece on Split Second a few weeks ago and then picking up Blind Fury on Blu-ray the other day I can safely put my hand up and say that Hauer is one of my favourite actors who is never afraid of playing unconventional characters.

In Wanted: Dead or Alive he plays former CIA agent Nick Randall who now makes his living working as a bounty hunter. After the authorities find out that a criminal mastermind, Malak Al Rahim (Gene Simmons), is responsible for blowing up a number of buildings in downtown Los Angeles, the police department calls Nick in to help. Nick, working with his friend (who is a former cop) Danny (William Russ) and his old partner Philmore Walker (Robert Guillaume from JCVD’s Death Warrant), signs on for the dangerous mission of bringing Malak down.

Although it has a few pacing issues it’s Hauer’s easygoing personality that keeps Wanted: Dead or Alive interesting as Nick is a pretty nice guy who is loyal to his friends and his lady. He is still not a man you should cross which is a mistake Malak will soon regret. I really enjoyed Gene Simmons as a villain in Runaway and he once again paints a menacing figure as Malak. We don’t know much about him nor do we need to; he’s just a crazy terrorist looking for revenge that needs stopped.

Nick seems to do OK on his Bounty Hunter’s salary as he owns a boat and has his own place which appears to be the size of a warehouse or airport hanger. Alright for some, I guess…

As I said at times the pacing does slow down a little too much and certain scenes seem to go on for longer than they need to but it helps to establish the mood and build up tension.

There are some entertaining action set-pieces including a car chase, shoot-outs and spectacular explosions. It also still holds up well considering it’s over 30 years old with only the music sounding dated and a little annoying with the harmonica grating occasionally.

I’m going to go into spoiler territory here so if you’ve never watched the movie better go get a beer… I promise we won’t talk about you. OK are they gone?

So my biggest gripe with the movie is the fact that Nick surprised me at the end by arresting Malak rather than killing him. It was a pleasant change from the usual killing the bad guy in spectacular fashion we normally see in these movies. Great job, Nick! Oh wait… so after he defeats Malak in a fight he sticks a grenade in his mouth and parades him over to the cops and goes over how much money he is owed. He then says “fuck the bonus” and pulls the pin out of the grenade which makes Malak obviously explode… in spectacular fashion. He walks away and plays his harmonica apparently with zero repercussions. So he just kills a man who is already in police custody and his pal Philmore says “Leave him alone” so they do and Nick lives happily ever after.

As much as I love a bad guy exploding I thought it was better that Nick had overcome his desire for vengeance and would give in to justice instead which he doesn’t do. I just think dramatically that works better but what do I know?

Anyway, Wanted: Dead or Alive is flawed but still entertaining with Rutger Hauer as watchable as ever; it’s slow in parts and the ending frustrated me a little but aside from that you’ll have a lot of fun.