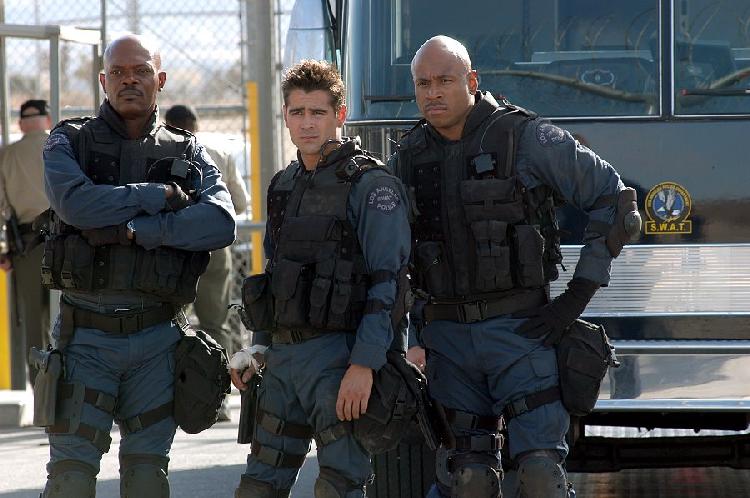 S.W.A.T. may not break any new ground for the genre but it has spectacular action in spades making it a fun way to spend a Saturday night with the sound cranked up to 11.

Plot: An imprisoned drug kingpin offers a huge cash reward to anyone that can break him out of police custody and only the LAPD’s Special Weapons and Tactics team can prevent it.

Review: I always think this movie gets a hard time; sure it isn’t perfect but for a big glossy action filled blockbuster it ticks most of the boxes.

After a cracking, tension-filled opening sequence it goes into generic training scenes but the pace keeps up and the second half has some superbly executed action.

I love the concept of a criminal offering a huge reward for anyone who breaks him out of police custody and it’s after this moment that things get pretty spectacular. Is it dumb? Certainly, but it’s an action movie so we’ll allow it. The street shoot-out is nicely shot and everything is coherent with the ridiculously awesome plane landing finale as the icing on the cake.

It just feels like an old-school action movie and is a fitting update of the TV show. Speaking of which, the music is awesome too with a modern version of the S.W.A.T. theme which kicks all kinds of ass.

I think where it falls short is that the characters are a bit one note and there isn’t much that’s memorable in terms of dialogue. The main stars are Colin Farrell and Samuel L. Jackson so Michelle Rodriguez and LL Cool J do feel more like side players and have no development, but in a movie like this that isn’t a massive problem.

Farrell is always reliable in these kinds of action movies and he plays Jim Street as essentially the incorruptible hero. Samuel L. Jackson is well, the same as he usually is but you can’t help but like Hondo even if it is weird that he doesn’t swear a lot.

Jeremy Renner is always entertaining as a villain and Gamble is a world class turd who is pretty much evil from the start. His final fight with Jim Street is pretty satisfying although a bit too darkly lit which I imagine was so it could keep the PG-13 rating.

Overall, S.W.A.T. may not break any new ground for the genre but it has spectacular action in spades making it a fun way to spend a Saturday night with the sound cranked up to 11.