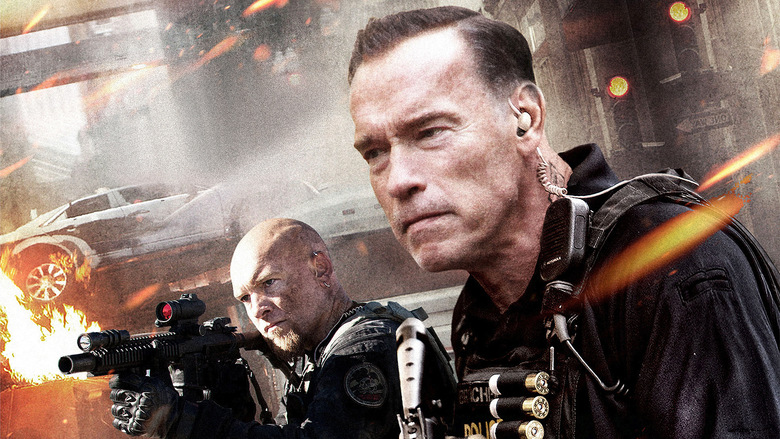 Sabotage is arguably the best movie of Arnie’s comeback with hard R violence, stellar performances and a great story. If you’re an action fan then go and see it or soon all we’ll get is kid’s movies.

Plot: Members of an elite DEA task force find themselves being taken down one by one after they rob a drug cartel safe house.

Review: It’s a pretty sad state of affairs when I literally have to go to another country to see an Arnold Schwarzenegger movie as it isn’t even getting a theatrical release in Canada. I hope you appreciate this, Arnold!

Yes, another Arnie movie comes along and makes little box office impact which is a damn shame as Schwarzenegger gives an excellent performance and the character of John ‘Breacher’ Wharton is one of his most complex and surprisingly layered. He’s actually a bit of an asshole and you aren’t really sure if you should be rooting for him or not… you do though simply because it’s Arnold.

It’s not an out and out actioner but more of a crime thriller; that’s not to say there isn’t much in the way of action. There are plenty of blood filled shoot-outs and the climactic car chase is executed to perfection.

Sabotage is arguably the most violent movie of Arnold’s and as you can imagine it’s up against some stiff competition; it’s mostly shootings but the very opening scene with the video tape of Breacher’s wife immediately grabs you with how harrowing it is. The camera cuts away at just the right moments but you get the idea of what is going on.

Speaking of cameras, there is some fantastic camera work in this movie; my favourite moment is the  camera loaded on the top of the gun facing the person shooting it which is an angle I’ve never seen before. It’s almost like a reverse POV shot and really cements director David Ayer as one of the most innovative action directors out there today.

The story has many twists and turns, making it compelling, unpredictable and authentically visceral; there is an incredible amount of swearing in the movie and although it does make it more real, at one stage all I could hear was people saying “fuck”.

Breacher’s crew aren’t exactly a nice bunch of people so it is difficult to sympathize with their plight. Like I said though, they all feel very authentic and they are the type of people required to do the kind of work they do. As my brother said after watching the movie: “You need Devils to fight Devils” which I thought was a very apt description.

I have to give a special mention to Mireille Enos who plays Lizzy, who is one of the craziest and scene stealing female characters I’ve ever seen. Normally in action movies, women are the victims needing to be rescued but not our Lizzy. She is a drug-fuelled nutjob whose unpredictability and unstable nature make her magnetic on screen.

Joe Manganiello has “action star” written all over him and I’d love to see him in more of these kinds of films; he’s another character who just comes across as menacing as Hell and I want to put on record that his hair was incredibly cool too.

I barely recognized Sam Worthington who still can’t hide his accent, but I enjoyed him in it and he was surprisingly one of the more sympathetic characters.

It’s well paced and kept me glued to the screen from beginning to end; you need to pay close attention as it’s quite an involved story so don’t just expect ‘splosions galore.

Overall, Sabotage is arguably the best movie of Arnie’s comeback with hard R violence, stellar performances and a great story. If you’re an action fan then go and see it or soon all we’ll get is kid’s movies.