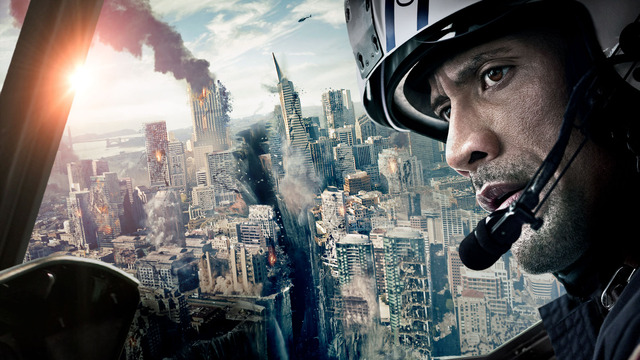 San Andreas is pure popcorn fun with genuine thrills. Sure, it won’t win prizes for originality but it’s one of Dwayne Johnson’s finest hours and massively entertaining.

Plot: When the San Andreas fault triggers a magnitude 9 earthquake, a search-and-rescue helicopter pilot (Dwayne Johnson) must navigate the destruction from Los Angeles to San Francisco to save his daughter.

Review: When we first saw trailers for San Andreas it was difficult to ignore similarities to Roland Emmerich’s 2012 in terms of set-pieces; the thing is though 2012 wasn’t very good whereas San Andreas is going to be the ultimate guilty pleasure.

Yes, there is a 2012 vibe to some of it and the story does follow a predictable formula but I had a goofy grin on my face from beginning to end. It was genuinely spectacular with some truly stunning visuals; it moved along at a breezy pace and there is plenty of destructo-porn for all the family.

Dwayne Johnson was just made for this kind of role and you totally believe him as rescue expert Ray, despite having every cliche in the book.

He’s separated from his wife Emma (Carla Gugino) and has just been handed divorce papers. Of course, events transpire, shit meets fan and the two are brought together as the country literally falls down around them and they try to find their daughter Blake.

Rather than Emma being the typical bitchy ex-wife she’s actually thoroughly likable and there is genuine family drama in-between the smashy smashy.

The gorgeous Alexandra Daddario was the biggest surprise as Blake because you are expecting her to be the annoying pouty daughter who blames her daddy for their family problems. This is not the case however, and she ends up essentially being the main hero of the tale.

Ioan Gruffudd joins the list as one of the all-time great movie assholes alongside Ellis from Die Hard; I was hoping they would maybe avoid this cliché as he is the typical new douche boyfriend which we’ve seen on countless other occasions.

The two English kids were believable and weren’t the typical “ohh I say” English stereotypes we sometimes see in these movies.

The always great Paul Giamatti has one of the biggest roles in the movie but really he’s only there to say “May God have mercy on us all” and other similar lines.

Kylie Minogue has a small role and you wonder why she would want to star in one scene of a movie; she should be so lucky to return if there’s a sequel (ho ho).

There are no annoying characters, like you used to get in these kinds of movies so despite some of it feeling familiar, there was enough innovation to really make San Andreas stand tall with some of the best of the genre.

The music score was entertainingly noisy; it was bombastic, heroic and everything you’d want from a summer blockbuster.

Overall, San Andreas is pure popcorn fun with genuine thrills. Sure, it won’t win prizes for originality but it’s one of Dwayne Johnson’s finest hours and massively entertaining.