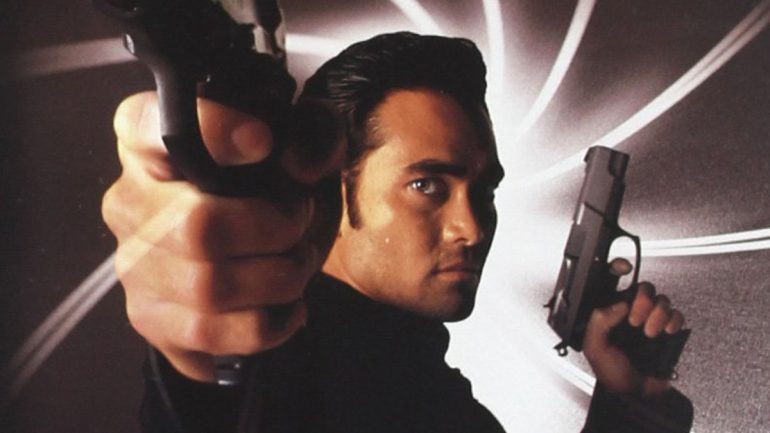 Mark Dacascos elevates any movie he’s in and he does his best in Sanctuary but it’s such an ugly looking film that it’s not one I revisit often. It has a few decent action scenes and I liked seeing Toronto but there isn’t anything that really stands out here.

Plot: Killers pursue a man (Mark Dacascos) and a woman (Kylie Travis), trained since youth to be CIA assassins, who seek refuge in the church.

Review: I used to have Sanctuary on VHS back in the 90’s and it was one of the first Mark Dacascos films that I saw; if memory serves me correctly I didn’t love it but I watched it again recently and enjoyed it much more. It isn’t a patch on movies like Drive were we really get to see Dacascos shine with his fantastic martial arts skills; this is more low key and dark but it’s also very… orange looking.

The visual style was distracting but aside from that it was much better watching it as an adult; I didn’t understand it as a youngster as it deals with themes of guilt and redemption which is far more interesting as you grow older.

Mark Dacascos is one of my all-time favourite action stars and he always chose projects that were a little different. In Sanctuary he plays Luke Kovak, a CIA killer who grows a conscience and ends up leaving the agency and taking some crucial evidence with him; he hides out in a church as a priest but it’s not long before his old comrades come looking for him.

The action scenes are pretty generic with nothing that really stands out and little in the way of fight scenes; we get a few explosive moments and his final showdown with the obnoxious Grace (Jaimz Woolvett) is a highlight. It just lacks that something to make it pop so Sanctuary isn’t one of Mark’s best.

I enjoyed Alan Scarfe (Griffith in Double Impact) as possible father figure (but all-round bad egg) William Dyson and he usually makes for a hateful antagonist.

Although this is meant to be set in Chicago it’s obviously filmed here in Toronto and I really wish I lived here back in the 90’s as practically every action picture was shot nearby.

Sanctuary was even open for a possible sequel with its ambiguous ending but it didn’t happen.

Overall, Sanctuary has a dreary visual style that is rather off-putting and it’s not especially exciting but it has some entertaining moments and Dacascos himself rarely disappoints.