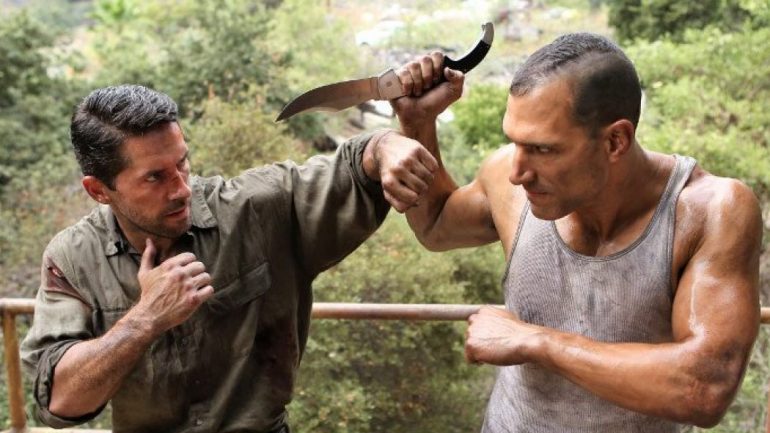 Savage Dog was everything I wanted from an action flick; plenty of fistfights and bloodshed to satisfy any genre fan.

Plot: A story set in Indochina in 1959, a land beyond rule and a time without mercy, and the birth of a legend….

Review: I’m a pretty easy guy to please when it comes to my action movies; if you have interesting characters, an engaging story and plenty of violence then count me in. Thankfully Savage Dog has all of these things and I’m going to go out on a limb here and say it just might be one of Scott Adkins’ best films to date.

I was a little nervous when I heard Scott would be putting on an Irish accent as it’s pretty near impossible for someone who isn’t from there to do an accent that doesn’t sound like a Lucky Charms commercial. He actually does a fine job and only has about 5 lines of dialogue anyway so you barely even notice he’s Irish. He uses a more subtle accent rather than say Tom Cruise in Far and Away so it never jarred with me at all.

There isn’t much depth to his character Martin but there doesn’t need to be; he did some bad things when he was younger and paid the price but he can’t escape the fact that he’s really good at killing people. He is indeed a savage dog as he pummels his opponents in various fist fights orchestrated by former Nazi Steiner played by the fantastic Vladimir Kulich. He was a fascinating character and although he was clearly not a nice person there was a sophistication to him which reminded me of Hans Gruber from Die Hard. He’s more the brains of the outfit however, as the real villain is Rastignac (Marko Zaror).

Zaror has never been cooler and his outfits are really stylish… frankly I wish I was him. You know the final fight will be between Martin and Rastignac and it doesn’t disappoint; so many movies today have fight scenes which aren’t long enough or ruined by CG galore but this is frankly a bit of a classic with a wonderfully brutal finale.

There is also a pretty epic battle between Scott and Cung Le but I’m not sure about how I feel about the way it ended. I thought Cung was a little under used too and he never really did enough for you to hate him.

Keith David is on voiceover duties and is also on hand to give Martin advice that he should just understand what he is good at (hurting people) and embrace it. He as always brings class to proceedings and I think he should narrate my life.

This movie is packed to the brim with action and it’s hard for me to pick a favourite moment but the bar fight featuring a machete was the stuff dreams are made of… if you’re weird like me. I can’t wait to see when someone does a kill count for it as it’s going to be up there with all 4 Rambo movies combined.

Learn more about how dogs off the big screen can be a great addition to your life.

Overall, Savage Dog was everything I wanted from an action flick; plenty of fistfights and bloodshed to satisfy any genre fan.