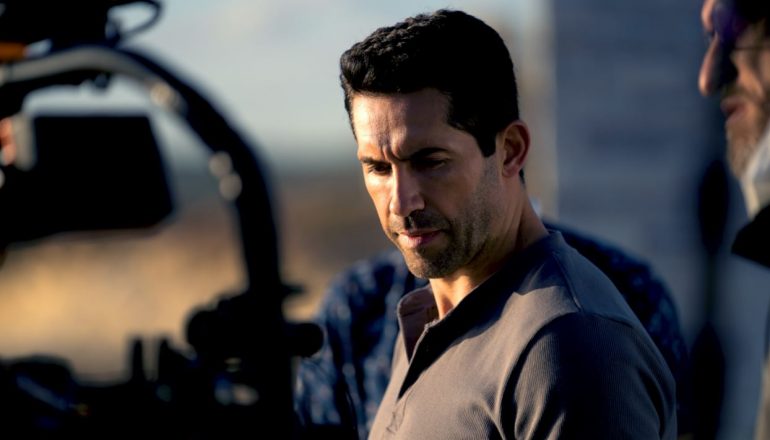 Scott Adkins is back as Mike Fallon in the new sequel Accident Man: Hitman’s Holiday. This time he must beat the top assassins in the world to protect the ungrateful son of a mafia boss, save the life of his only friend and rekindle his relationship with his maniacal father figure.

He stopped by to chat with me about the film which you can check out below. 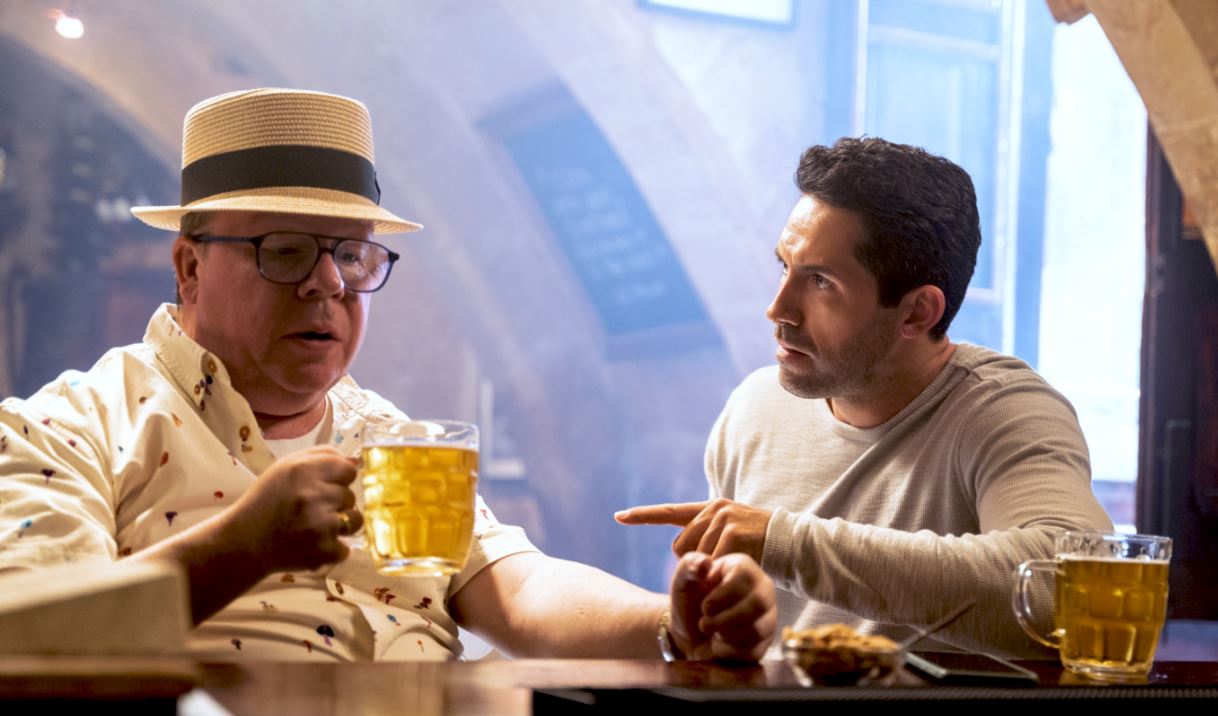 How has Mike Fallon changed since the last movie?

So after the events of the first film, when he killed all of his friends (laughs), he selfishly convinced himself now that he’s in Malta that he doesn’t need mates in his life anyway. He doesn’t need girls, he doesn’t need a disgruntled father figure and doesn’t need any friends. It’s just me, myself and I and he’s happy with that. Then what he does is earn some money. Doesn’t have anyone close to him now. The only thing he has is this woman that he’s paying to kick the shit out of him on a regular basis. But that’s as far as it goes. He’s trying to convince himself that that’s all he needs but then he accidentally bumps into Finicky Fred, one of the only people that he didn’t kill in the last movie and they begrudgingly rekindle the relationship. He starts to think, “you know what? I don’t know. Maybe it is better to have somebody around that I can rely on and trust”. And that’s essentially what the theme of this film is – friendship and even if you’re an assassin, we all need mates and people we can rely on. So that’s what we’re going for with Accident Man 2.

Sarah Chang was just fantastic as Siu Ling; did you know her before the film?

I did not. I have to give credit to Michael Leeder for putting me on to Sarah Chang; it was an exceedingly difficult part to cast because she’s specifically from a certain area of the world and we wanted her to be from Hong Kong. So that narrows it down. She’s got to be female. She needs to be a martial artist. She needs to be able to act and deliver the comedy. Really difficult and it was really hard to find the right person. So happy that it was a struggle that led me to Sarah because as you say, she’s fantastic in the film, brilliant job, and she checks all those boxes and she’s great. I mean, she runs away with the movie, but actually the character was written differently. She was more cutesy and I was never quite sure about it and then two days before we started shooting I was like “we’re changing it”. We’re going to make it where she’s a badass, miserable bleeder. I think we should make her a miserable bleeder. And I had Sarah do both versions and read them to me, and I was like, Yeah, we’re going to make Siu-Ling a horrible, horrible, miserable bleeder. And that was the way to go. She’s such a nice person so she plays that but inevitably, she’s still got some likeability about her.

You worked on this with Stu Small, like you did with the first movie. What’s the process for you both putting the script together?

It was a slog on the first one because he’d written some scripts before, but it took us ages to do and it didn’t really have an end in sight. But for this one we worked on the structure and the story together, put all the ideas and came up with like almost a scene by scene synopsis. Then Stu took it away and he put his amazing dialogue into it and then pretty much we were there at the finish line. George and Harry came on and they added their little bits and pieces and some structural changes, which were great and then we were there ready to go.

Mild spoilery question here but why was the safe word “Flamingo”?

You were thrown out of a van at one point, and I thought it looked like the most painful part of the movie; I take it you were wearing pads?

Yeah I was wearing pads; they threw me out of the van on to the hard concrete. How could they? (laughs) It was on the last day, so I figured, forget the hospital. It doesn’t matter. Just delay my flight home.

Yeah! I haven’t been injured on this movie yet. Somebody throw me out of a van quick.

How did you find filming in Malta? And did you ever get any Maltesers?

(laughs) Oh that’s made me laugh. I didn’t find any bloody Maltesers did I? (laughs)

Yeah, no, I loved it in Malta. The Maltesers I can’t answer that question. I don’t know if they have them or if they don’t. I really don’t know. But they certainly don’t in Mike Fallon’s world. But I loved it; it’s a great place to go on holiday. The Maltese Film Commission looked after us very well. Got a nice tax break. Everyone should go to film there. Although I believe that they are maximum capacity these days because it’s such an attractive place to make a film. But it looks great in the movie as well, doesn’t it? Mostly just looks lush and it gives a different look to the first film, which was down and dirty in London and now we’ve got like this hitman’s holiday so it worked really well.

It’s funny. It feels like an R-rated James Bond film where Fred is kind of your Q, and then you’re Bond and you’ve got Ray as a crazy version of M. Was that deliberate?

Oh you’re right! No, the first I’ve heard of it. Yeah, it sounds right, but no, that wasn’t deliberate. No, it wasn’t really my audition for James Bond (laughs). But you’re right. It makes sense. 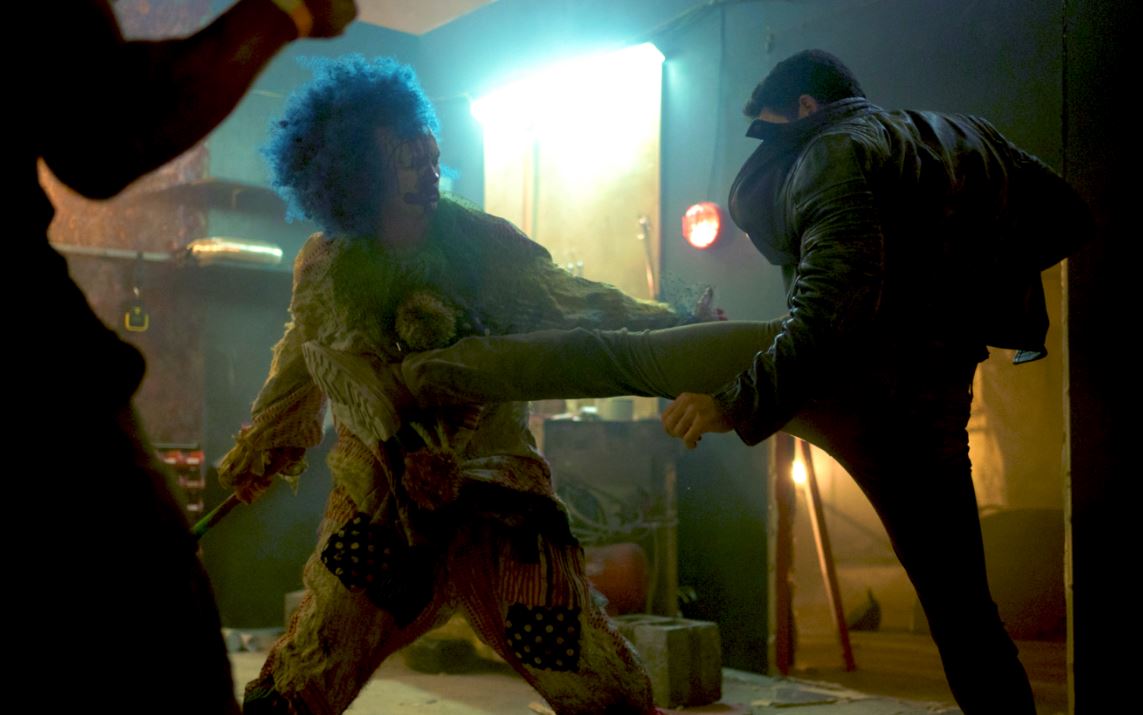 Who came up with the idea of Coco The Killer Clown; he may be my favourite character of this year…

Yeah, that was me. That was me. I was just thinking of what crazy, colourful characters can we have? Suddenly he pops in there like the Stay Puft Marshmallow Man. A killer clown. Is that too much? And then Joker came out and I’m like, “Everyone’s doing the clown these days with movies like IT. Is it too much? It’s more inspired by those videos on YouTube where you get those clowns that are just standing in the road and they see them and they’re freaking people out. It was meant to be one of those guys. I just wanted this completely manic, crazy, off the wall character that he’s got to fight and he’s got no skills. Only skill he has is that he can’t feel pain. But Beau Fowler when we cast him and he came and it was very chaotic how he got the part and came over last minute and he added this pathos to the character. There were really quite unexpected layers where he desperately wants to feel pain because if he can’t feel pain, it doesn’t feel like he can experience life. Only when he feels pain, does he feel like it’s actually living and is desperate for it. He’s got this sadness and this crazy clown stuff going on. Then when he starts to feel the pain, he’s loving it. It’s just complete nonsense but he brought a lot to it and was brilliant.

I feel like we need another entry. Do you have any ideas for part three?

I’ve got some little ideas but I need a green light first. I need someone saying “Right, we’re going to do it” and then I will not waste my time.

There were multiple fight choreographers working on this film. How did that work putting all the fight scenes together?

So Tim Man, selfish bastard that he is went and did another movie, I was like, “Oh, okay” but he’d already actually choreographed a little bit of stuff which he pre-vized back in Sweden. We had a false start. We almost did it and then didn’t do it and then we had Dante come in and he was choreographing and then he had another job take him away. So we just got in and I did more choreography on this than I’ve ever done on any other movie. Then you’ve got George Kirby, who’s a stunt man, choreographing, Sam and just different people. Andy Long, of course, did a lot and choreographed and directed the end fight. So, yeah, we all mucked in.

I love the artwork over the end credits. Was that Shaolin Jaa?

Yeah. Shaolin Jaa and Crike 99 is the artist and yeah, he’s fantastic. He’s been drawing pictures for me for ages. Both of them hooking me up and we thought, Yeah, let’s put the work into this and bring it back to the roots of the comic book. It’s really cool. We got the animated poster and we have the actual poster.

Finally, what would you like audiences to take from Accident Man 2?

I just want them to be entertained. Put it on. Switch your brain off. Have a great time. Laugh at the jokes. Enjoy the craziness of it. Marvel at the martial artistry to behold (laughs) and just enjoy a good romp of a film. You know, I grew up watching stuff like No Retreat, No Surrender. No one’s going to say that they are good movies, but they are brilliant movies because they are infinitely enjoyable. Essentially that is what I wanted to do with Accident Man. I want to just give teenagers, 20 year olds and everyone else something that I grew up on, like No Retreat, No Surrender. They can watch it over and over again and just enjoy the feel good vibe. With the violence and the comedy and the bad language, it’s just the fun of it. I just want people to be entertained, especially in these days when everything is so messed up. Just switch your brain off. Forget about all your troubles. Enjoy Accident Man.

Thanks very much for chatting and all the best with the film.

Yeah. Thanks, and I appreciate the support over the years.