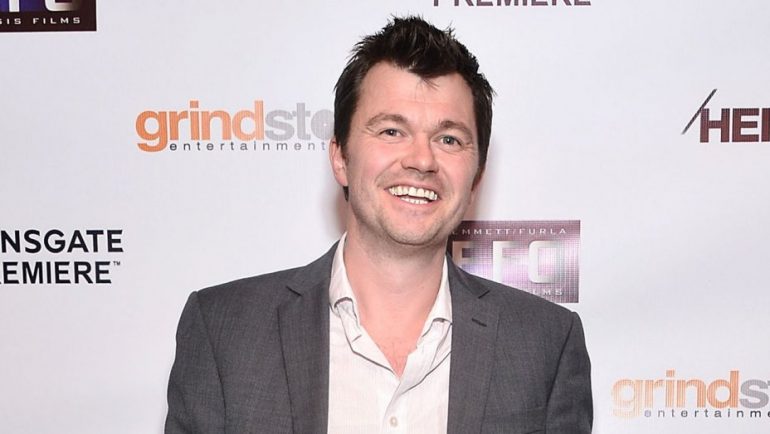 Scott Mann directed the Scott Adkins/Kelly Hu movie The Tournament as well as Heist from 2015 starring Robert De Niro and Dave Bautista. Scott teams up with Bautista once more to bring us the action-packed Final Score which will be out later this week.

Scott stopped by to chat with us about the movie.

Final Score with Dave Bautista is out this week; what appealed to you about it?

It was a strange one and came about in the most random way where a producer that I knew introduced me to a guy called Mark Goldberg who was a big West Ham supporter and he knew that the club was moving as they had sold their old ground and were moving to a new ground. So as a love letter to the club he wanted to incorporate the demolition of the stadium into the movie. When I first met them they had a first draft script come in where they’d only had a few weeks to write it. The brothers Lynch won a script competition in the pitching process and handed in the script. That was the one I read in what I believe was February but the caveat was we had to shoot the movie by July/August. So it was a really crazy turnaround for a production which was something I hadn’t really seen before where you go from an idea all the way through to production in such a short time frame. What appealed to me was even though it goes along places we’ve kind of seen before where I’d even heard the pitch that it was “Die Hard in a Football Stadium” so it’s kind of hard to get away from that but I liked the original moments and the freshness. There were also more shocking moments which really popped out. I really loved that and it really appealed. I’ve always wanted to do a British action movie like my first film which was a big factor but I wanted it it to be a big bombastic movie that was made in Britain, shot in Britain and with British sensibilities making it kind of unique in lots of ways. That’s what really got me excited about this project and yeah, we had this insane journey from taking it from that to actually getting a film together. It was quite a journey. You worked with Dave on Heist previously, was he always the first choice to play Michael Knox?

When I came on board we started reworking the script with Jonathan Frank and kept working on it as we stepped forward. We’d initially written the character as a British hero and it was almost a flip of what’s there now where it was someone who really wanted to see that match. We had a whole different kind of thing going on. Pierce Brosnan was cast in it but we kept wondering who could be cast in the lead role. Dave Bautista’s name kept coming up because I felt he had a lot more potential than people realize after working with him before. There’s a side to Dave that a lot of people don’t see where at that point he had played more villains than lead protagonists. His persona in real life is that he is a really warm guy and a big teddy bear so it was interesting to tap into that side of him. It was kind of an organic thing where we talked about it with Dave and it melded together in a nice way. He was certainly the first (and only) person we talked to about the American role. We developed the script together in a large degree and really collaborated on making it what it is. We loved the craziness and absurdity of the script and wanted to play on that. We also wanted to make sure there was a real character inside there and what we were tapping into thematically mattered. So even though it is wrapped in this candy wrapper of crazy nonsense that goes on in the stadium it still explores the themes of love and sacrifice. We were very lucky to have Dave and have him so involved with the film.

How did Pierce Brosnan come on board?

What was funny is that we have this scene in the movie which is kind of a sit down one to one between Dave’s character and Dmitri. So we were trying to write this thing with a horrible deadline looming and this basketball team came into the hotel and were like “hey guys! What you doing?” and we’re saying “we’re trying to write a script” so there’s like this crazy atmosphere. So one of our writers had this story which was real about his mother who had this one eyed chicken called Clara when she was growing up and we used it in the script as a thing about sacrifice. So we put it in thinking we would probably have to change it. So we hand it in and I go finish a horror movie I’d been working on and this producer gets back to me saying “what’s happened is we’ve sent the script out to Pierce Brosnan who we really want to get in for the Dmitri character. He responded really well to the script and he’d like to talk to you.”

So I get on the phone with Pierce and says the first thing he loved about the script was the story about one-eyed Clara (laughs). So from that point on you can’t change it and it’s in the script forever (laughs).

A lot of the action looked to be done practically, do you prefer doing that rather than using CG?

Oh 100% I’m of the opinion that if there is a movie about spectacle then you kind of want to see it for real and I think we are attuned as humans to spot things that don’t feel right. When you freeze a frame it looks fine; that’s one thing but we can tell when it’s not real. Everyone’s got a good sense for that and it’s getting better and better all the time. If you’ve got great people doing great action then you’ve got to do it for real. I’ve always pushed to do as much in-camera as possible and usually the kind of thing that gets adjusted are safety rigs. The stunt guy actually did drive the bike off the rooftop for real; there was talk about doing a separate rooftop and using greenscreen where you could spend an extra few million on one moment or something which obviously we can’t afford. So instead we asked ourselves “how can we do this for real and make it safe?” you maybe spend a bit more on safety but you get those stunts for real and I am a huge advocate for that. When you look at classic stunts you can tell that a large part was done for real because it holds up even in films that are like 50 years old. How did you find working with such a large crowd?

Here’s the joke of it; I’m saying “stay away from vfx” but there’s no avoiding effects in this movie (laughs). The effects were the hardest single challenge of this film especially filling that stadium. We were in an empty stadium but were creating the illusion that it’s full which was a monumental challenge. For the last match of West Ham (which was against Man U) we went there with about 8 cameras and I shot background plates around where I’d figure I’d shoot the scenes. I didn’t know for sure but I had a lot of scenes playing out in the control room. So we tried to get the general angles of a real crowd watching a real game. The effects house did a scan of the stadium to create a 3D outline of the stadium and place in a digital crowd so there are a lot of moments in the film where you can’t even tell it’s a digital crowd. When we shot the film we had about 30 or 40 extras and that was it but we needed 35,000 to make it look full. Each time we did a setup we had be very conscious of where we can shoot things from, how much it will cost in VFX and so on. Fans of West Ham also helped out by coming along as extras which really saved us so thank God for that.

I was just thinking about Faisal’s “hero” moment at the end and was thinking “Oh no, they aren’t going to are they? Oh my God, they are!”

They went and did it (laughs)! I love that moment; it’s so daring and is the kind of moment where if you weren’t an independent smaller movie you wouldn’t be able to have that kind of shocking scene. You tend to steer clear of them so that’s what I liked about this movie where it dared to actually go there. It’s funny you mention that moment as it’s controversial (laughs).

When we first visited the stadium for the first time it was kind of hard as you can’t go anywhere as it’s all locked down and everyone is quite strict. We met this guy called Faisal in West Ham who was this really nice Steward and said “don’t worry, lads I’ll show you around” and he got the keys and showed us around. Without that tour of the stadium back in the day we wouldn’t have had any of those scenes in the movie. He was such a sweet guy we named the character after him. It was a fitting tribute to the real steward who made all of this happen.

What do you want audiences to take away from it?

Honestly I want them to just have fun. The film in itself is unique and absurd so we went with that. The world is in such a weird place right now; I personally think there’s an element to films where you want the escapism to get away from things. The film could have had a completely different version with heavy political overtones but I don’t think that’s what I’m after as an audience member. Just to take it as a standalone action movie that doesn’t take itself too seriously. For me there is the central theme of sacrifice and love and loss so the perspectives of them are explored through the characters. Even though it’s an action movie there are a few interesting themes going on there that I hope makes you think and feel for a moment.

Totally! (laughs) You know what? I’ve never seen Sudden Death! I know no one will believe me but I didn’t know about it until I was making the movie. It totally is kind of like it.

It was an insane and unique experience to work on and hopefully the film is that too.

FINAL SCORE will be out this week.