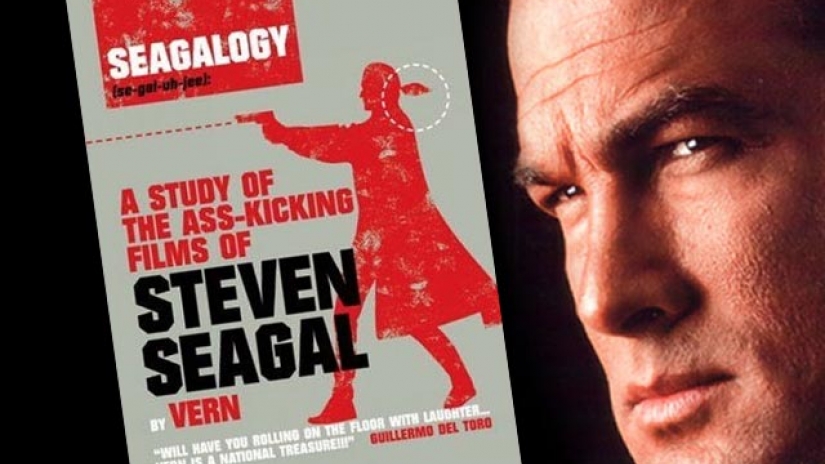 Seagalogy: A Study of the Ass-Kicking Films of Steven Seagal (2008) Book Review

Any fan of Steven Seagal needs to have this book in their collection as it is riotously funny and thoroughly entertaining.

PLOT: Seagalogy: A Study of the Ass-Kicking Films of Steven Seagal is a book released in 2008 by Titan Books. It was written by Vern and it is the first in-depth study to be published on the complete creative output of Steven Seagal. The book makes a careful examination of every Steven Seagal film from 1988’s Above the Law to 2008’s Pistol Whipped, as well as providing reviews of some of Seagal’s other output: his music, his appearances in commercials, and even his energy drink.

REVIEW: Even if you only have a passing interest in Steven Seagal then this book is utterly essential; Vern’s writing is incredibly engaging and very witty; in fact, if I ever meet him I’m buying the beers. He is clearly a fan of the action legend and it shows in his reviews for each of his films. I literally cannot watch a Seagal film now without this trusty tome next to me.

Vern spends about 3-4 pages on each movie dissecting the plots and exploring the recurring themes of Seagal’s movies like him being an ex-CIA guy in nearly every film or dealing with corrupt CIA types.

I think we can all agree that Seagal’s finest hours were Above the Law, Marked for Death, Out for Justice, Hard to Kill and Under Siege. On Deadly Ground was always more funny than anything; I always loved how he preaches environmentalism in this movie by blowing up an oil rig and killing hundreds of people… because that will really help the environment.

This book explores all of these themes but also the recurring theme of bar fights and how many times glass is shattered… which pretty much happens in EVERY Seagal film.

Speaking of bar fights, “Anybody Seen Richie?” is still the best bar fight of all time but the fight in Above the Law is also impressive. Vern also goes into detail about the frankly baffling bar fight in On Deadly Ground too where Seagal asks: “What is the essence of man?” before beating the crap out of someone.

Vern also talks about how Seagal’s accent has bizarrely changed over the years and it’s really difficult to watch any of his movies now without smiling. He also brings attention to little things in the movies which sometimes I might have missed and now when I watch them, it’s the main thing I watch out for.

My favourite parts of each movie review is the “Just How Baddass is he?” which usually involves a speech from a fellow cast member who talks about Seagal as if he’s related to Jesus… kinda.  Remember this peach from On Deadly Ground?

“Michael Jennings: You wanna know who he is? Try this: delve down into the deepest bowels of your soul. Try to imagine the ultimate fucking nightmare. And that won’t come close to this son of a bitch when he gets pissed.”

Classic! So yeah, there are sections of the book which actually focus on these moments of greatness and are always hilarious.

This is the kind of book that would be a riot if it was turned into a documentary where fans of Seagal all talk with Vern about his movies and tell some entertaining stories, as long as I’m invited obviously.

Overall, Seagalogy is a fun read and Vern has proven himself a hugely entertaining writer; if he comes up with more books then I would happily pick them up immediately.