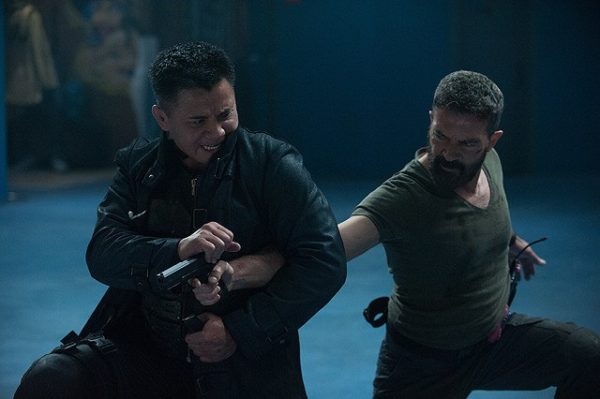 Security does exactly what you’d expect and although it doesn’t reinvent the genre it doesn’t need to with a few decent action scenes and suitably cool hero in Antonio Banderas, it’s worth a rental or at least watching on Netflix.

Plot: An ex-special services veteran (Antonio Banderas), down on his luck and desperate for work, takes a job as a security guard at a run-down mall in a rough area of town. On his first night on the job, he opens the doors up to a distraught and desperate young girl who has escaped and fled from a hijacking of the Police motorcade that was transporting her to testify as a trial witness in a briefcase. Hot on her heels is psychopathic hijacker (Ben Kingsley), alongside his resourceful henchmen, who will stop at nothing to extract and eliminate their witness.

The story is exactly as you’d expect and brings zero surprises, plot twists or memorable dialogue and yet I found myself enjoying it for being a straightforward old-fashioned actioner that was a blissful 90 minute escape from the tedium of reality.

Banderas is watchable in anything and usually so is Kingsley although over the past few years he has starred in his fair share of stinkers. He is the calm and collected British villain who never loses his cool and you can’t help but feel he wishes he was Hans Gruber.

Security has nice production values and solid action scenes with the action highlight being a fight between Banderas and Cung Le. There is also a cool John Woo-esque moment with Banderas sliding across the floor firing two guns; I was just waiting for some random doves to show up.

The supporting cast of security guards are utterly useless and are basically there as cannon fodder so it’s just a matter of time before each of them gets killed and you’ll feel nothing for them. The girl is mildly annoying too in the first half but I hated her slightly less by the end.

Overall, Security does exactly what you’d expect and although it doesn’t reinvent the genre it doesn’t need to with a few decent action scenes and suitably cool hero in Antonio Banderas, it’s worth a rental or at least watching on Netflix.