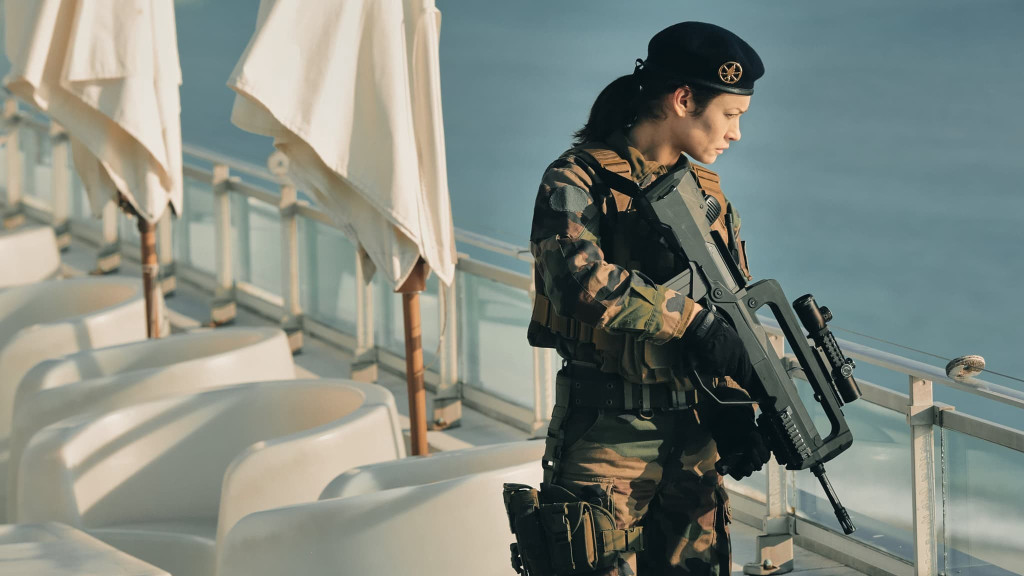 Sentinelle was a pleasant surprise after reading so many negative reviews; I love Olga Kurylenko and I thought she was fantastic as Klara. The concept is nothing new and there is the odd lull in pacing but watching her take out the trash in gloriously violent style was thoroughly enjoyable.

Plot: Transferred home after a traumatizing combat mission, a trained French soldier uses her lethal skills to hunt down the man who hurt her sister.

Review: Directed by Julien Leclercq (JCVD’s The Bouncer) Sentinelle is one of the better Netflix action movies with Olga Kurylenko once again proving she is one of the more interesting action stars in the genre today.

Sentinelle has some incredibly low scores on IMDB so I had no expectations for this movie but was pleasantly surprised by how enjoyable it was; it wastes no time getting going opening with Klara (Kurylenko) in the military battling terrorists in the Middle East.

The mission doesn’t end well with Klara heading home to France with PTSD and struggling to assimilate back into normal society. She is reunited with her loving mother and sister but their happiness doesn’t last long as after a night out at a club her sister is raped and beaten ending up in a coma. FYI we don’t see said attack, thankfully and we didn’t need to.

The alleged perpetrator is the son of a local rich businessman so he is protected and the law can’t really do much.

Klara won’t let this stand so she becomes an angel of vengeance as she tries to take down the people she sees as responsible.

Sentinelle is only 80 minutes long and after the initial opening scene the pacing does lag a little but I wasn’t bored as it was establishing the characters; admittedly Klara isn’t all that exciting and the PTSD thing has been done to death but there are some gritty and brutal action scenes. The fights are desperate (especially the bathroom fight in the club) never looking overly choreographed, keeping things relatively believable.

I’ve read in some reviews that people think Klara was invincible, but I never saw it that way as it was her sheer determination that pushes her on. She was in the military so she is trained to fight and survive so I didn’t question her ability to hold her own.

Sentinelle is well shot with an ethereal score that gives it an almost dreamlike atmosphere; as Klara spends a lot of the time doped up due to her PTSD it helps to demonstrate her mental anguish. She isn’t someone who will work in a café serving drinks; she is a soldier and needs a war to fight.

She becomes a one-woman army at the end and there are some wonderfully vicious kills; at one point she sticks a knife through a goon’s chin which was awesome.

Overall, Sentinelle was far better than I had expected with Olga Kurylenko once again proving she can hold her own in an action scene; it’s nothing new storywise and the pacing does lag slightly after the opening sequence but it lets us get to see Klara’s internal struggle and there are more than enough violent kills to make it worth checking out.